Cruising for a Lifetime

Meet the Man Who Calls a Cruise Ship Home

He enjoys tea in the afternoon and fish for his evening meal. He’s not much different than you and me, with one exception: Morton Jablin lives on a cruise ship.

For the past 15 years, the 95-year-old retiree has called home.

I spent 100 wonderful days living on a ship traveling throughout Europe. Still, I often fantasize about what it would be like to trade in my modest Big Apple crib for an even smaller living space on a longer voyage.

So when I learned that I would be traveling with a retiree-turned-full-time cruise ship resident during a recent New England/Canada cruise, I was intrigued. I was also anxious to learn more about the man and his life at sea.

All in the Family

When I first met the charming and congenial Jablin, he was excited to tell me that he believed we were related, distant cousins. According to Jablin, his grandmother, his father’s mother, was Mary Jacobs from Brooklyn. My grandparents, last name Jacobs, were also from Brooklyn.

“I think we’ll find out we’re 18th cousins before we’re through,” Jablin quipped during our meeting in the ship’s lounge.

Jablin further explained about my surname, offering all kinds of helpful info about how I could find out more about our potential shared ancestry.

While learning about my family history was interesting, I was interested in learning more about the man seated before me, and how he ended up living on a cruise ship for the past decade and a half.

I had lots of questions like: Why do they call him “Captain?

“They used to call me “Grandpa” Jablin explained, “but they call me “Captain” because I achieved the rank of captain in the Navy, WWII. Being in the Navy had a big impact on my life; it’s where I first fell in love with the sea.”

How did he end up living on a ship?

“My wife and I used to travel together on cruises. We didn’t live on the ship, but we spent six to seven months a year traveling. When my wife Charlotte passed away in 2005, I decided to stay on the ship.”

Delicious Vegan Meals
on a Cruise, no Less!

I also wondered how he manages since he is now legally blind due to macular degeneration.

“I only see shadows. As a navy man, I know my boundaries, and its safety first. I know how many steps it is to my cabin, to the dining room, I know the carpeting and I know where not to go.”

Jablin, who was raised in Brooklyn, credits the Navy for offering guidance and direction in his life. “In 1941 I was a freshman in college and I enlisted in the Navy’s V12 program. A year later, I was an officer in the Pacific. “I think the Navy program is excellent since it teaches a sense of responsibility.”

When Jablin returned to the state’s post-Navy service in 1946, he worked as a pharmacist. He then founded a successful lace-making business. Times changed, and so did the lace industry which moved to China to take advantage of cheaper labor.

Jablin’s grandson took over the family business after Jablin retired in 1989. The company continues to thrive as it owns 45 of the 70 machines that currently produce lace in the U.S.

While Jablin doesn’t go off the ship when it docks in ports anymore, he likes structure.

“I like to maintain a schedule: I have breakfast in my cabin, I go to high tea in the afternoon, and sit at the same corner table in the dining room for lunch and dinner, where I eat Dover sole each meal. I prefer to eat alone as I find it hard eating with others since I am not as neat as I once was due to my vision problem.”

According to the dining staff, Jablin prefers not to have flowers on the table since it reminds him of his wife. But the staff keeps everything in the same place on the table reserved for the “Captain” so he has no trouble finding anything during meals.

Jablin maintains contact with his family via telephone and visits from his family on board. His two sons, ages 65 and 70, sail with him for a month each year onboard the Navigator.

While talking to the sharp, dapper-looking man seated across from me, I wondered what the secret to his longevity was. Was it his diet? Exercise?

I also wondered what words of wisdom he could offer to anyone considering following his unique retirement path, to those considering a life at sea.

“I would advise them to do it 1000 percent if they have the financial ability to do so. This is a much better life than any senior citizens home anywhere in the United States or anywhere in the world. They take marvelous care of you.

If you need anything, you have it in ten minutes. You can have a doctor in your room in five minutes. This line, Regent Seven Seas, is a wonderful company. The people that work here are kind, considerate, gracious. They treat me like family. It’s a wonderful life.”

When I asked the staff and crew about the man who lives on the ship full time, there was one word that was synonymous with Jablin’s name: “family.” “He’s like family.”

And I’m reminded that family comes in all forms: There is the family assigned to us at birth, the family chosen for us, and the family we choose to join us on this journey.

On the last day of my trip as I was leaving the ship, I glanced over and saw Morton Jablin walking back toward his cabin.

I stepped out of the disembarking line and went to say good-bye, and without missing a beat, he greeted me and said, “Ah it’s my cousin!” and added, “I hope we’ll sail together again someday.”

I hope so too. 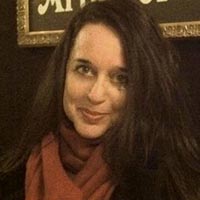 www.gonomad.com
This article was last updated Mar 16, 2020 @ 11:04 am
If we've inspired you to travel with this story, why not check out the prices to get there and make it happen. Search airfares, hotels, and rental cars here. Thanks!