Alsace: The Walled Town of Riquewihr 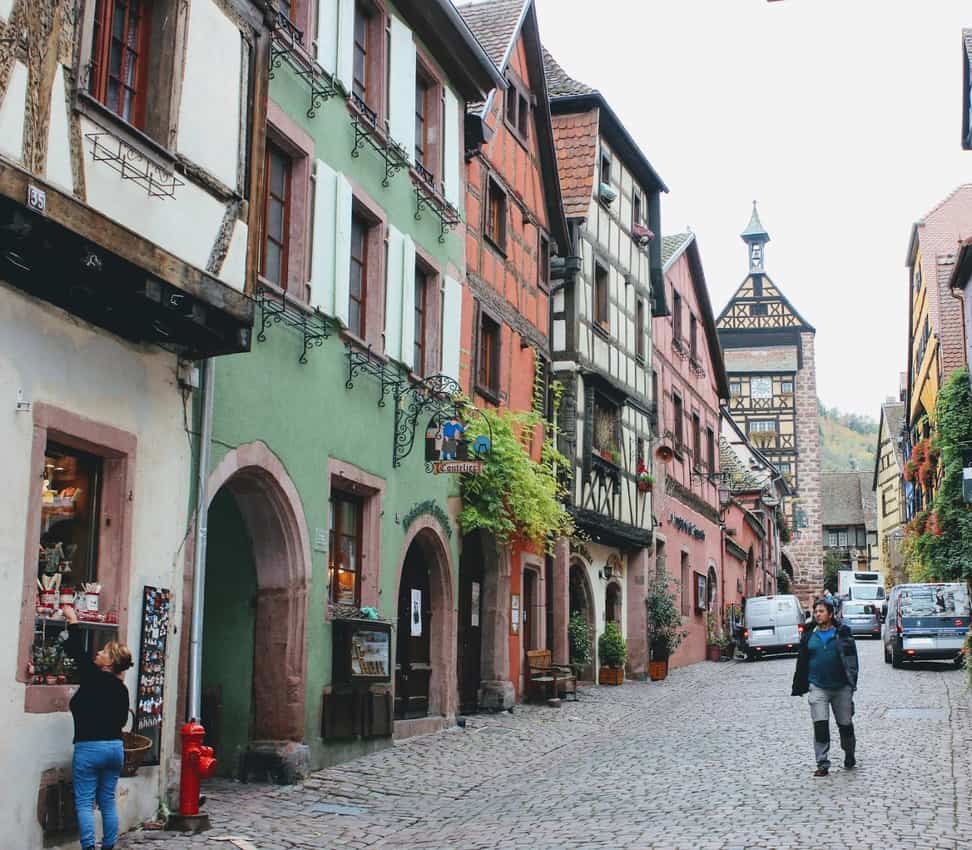 On a cool November day, our feet touched down upon the old mosaic cobblestones of Rue, France meticulously laid out in circular patterns.

Even though the calendar said late fall, geraniums, and other blooms spilled over flowerbox rims. Hollywood had used this fairytale town in the Alsace wine-growing region as an inspiration for “Beauty and the Beast”.

We stepped aside asa sightseeing train, resembling something out of Disney, rounded the corner in front of us. A few cars, and delivery trucks, rumbled past. Postal delivery was achieved with a bright yellow motorcycle with attached bags. 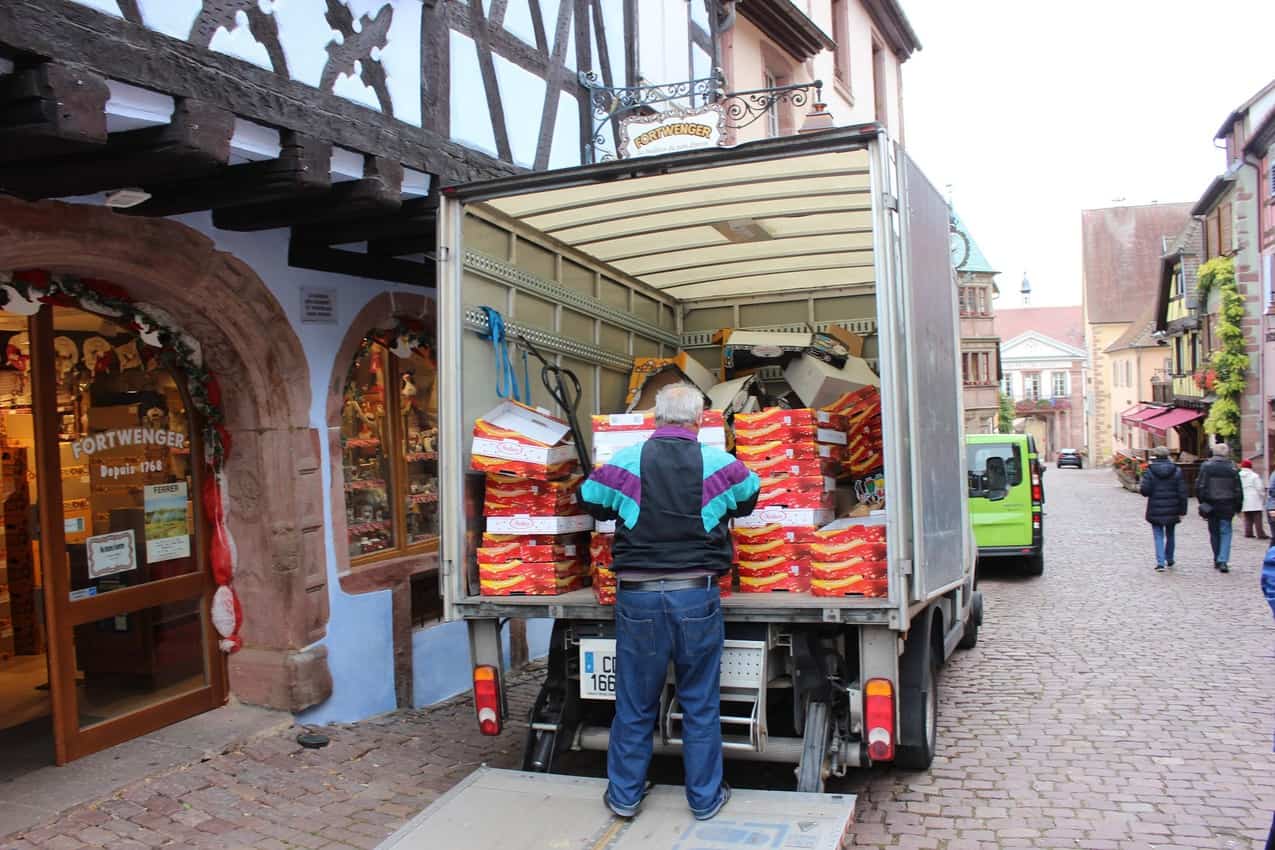 We watched as a driver unloaded ingredients for Fortwengers Gingerbreads and Confectionary. Fortwengers has been in business since 1786.

Famous for its Riesling and other great Alsace wines, it looks today exactly as it did in the 16th century.

We began to explore. themany unique shops and restaurants. Follow Rue General de Gaulle and it will lead you to The Dolder a pink sandstone and timber tower that was built as a part of the 1292 fortified wall.

The four stories of the tower/defensive gate housed the caretaker and his family who were in charge of closing the entry door to the village every night.

Beautiful window displays featured the unusual: one was a life-size wooden doll set amongst hanging geraniums. There was even a bright red scooter carefully balanced on a balcony. Water spigots jutted out from buildings with the signs reading “non-portabo.” (not drinkable).

There is no risk of getting lost: The Rue du Générale de Gaulle the main street is lined with brightly colored half-timbered houses…bright blues, yellows, and reds… from the Renaissance period.

Back alleys branch out from Rue du Générale de Gaulle. Don’t hesitate to wander. A stroll down the cobbled streets will take you to colorful and flowery half-timbered houses.

Riquewihr was not greatly damaged by WWII. Houses dating from the 15th to the 18 centuries are still viable.  Riquewihr fortifications were built back in 1291 In 1680. Louis 14th army took possession of the village. In 1796 Riquewihr was permanently joined to the French Republic by the Treaty of Paris.

Surrounded by vineyards, Riquewihr has lots of back alleys to explore, you can taste the wine at some 20 Winstubs that abound. The more we looked around the more details we spotted including dates carved into buildings and inscriptions. twisting lanes and hidden courtyards.

The fairytale setting that is Riquewihr blends French and German influences Many residents speak German over French, or a mix called Alsatian. The Alsace region has been controlled by both France and Germany over the years, and has the influence of both.

French food is indeed unique. Eating in Alsace, you get a taste of both French and German foods and a third version of the blend of the two cuisines.

We opted out of outdoor dining. Instead, we discovered La Grappa d’ Or 1, Rue des Ecuries Seigneur where we stopped for lunch. The inside décor is worth a look in itself. We tried the pork knuckle with roasted potatoes for 16 euros with tiramisu for dessert.

Some others on our route, the Au Four Banal occupies a pink half-timbered building.  9, rue des General de Gaulle and sells souvenirs. The proprietor of Les Macarons de Riquewihr was handing out macaroon samples at 49 General De Gaulle. There was even a Foie Gras Shop (so French!)

Talking to a few of the locals, the following three came up as top winners of Alsace cuisine Choucroûte garnie Alsace is a version of German sauerkraut. seasoned with juniper berries and black peppercorns served with potatoes and a variety of meats including ham, and sausages,

Tarte Flambé is the Alsatian equivalent of pizza, though extremely different. It is made of a thin layer of dough, covered with crème Fraiche (rich sour cream), cheese, onions, and bacon (lardons in French).

Kugelhopf is similar in shape to the American Bundt cake, is baked with almonds and raisins and topped with powdered sugar.

Getting to Riquewihr By Car

Fall is a good time to visit Riquewihr as it can get crowded during peak times.

Parking is outside the town walls and entrance into the old town is through a series of old town gates in the large clock and watchtowers.

Restaurant: We wanted to try something out of our usual comfort zone. Two items stood out for us.. the venison and the foie gras. Both were surprisingly good. At La Table du Gourmet, 5 Rue de la Tere.

Find out more about visiting Riquewihr on their tourism website.