Marrakech: A Step Back in Time

Dining with a few thousand people isn’t an everyday event; it is however possible every night at the Place Jemaa el-Fna in Marrakech, Morocco. The smells of grilling meats mingle with that of exotic spices; more interesting is the mix of cultures colliding. King Hassan II explained Morocco as a tree whose roots lie in Africa but whose leaves breathe in European air.

The floor shows in the Fna are a jumble of snake charmers, storytellers and acrobats. If you’re in need of a spare tooth or care to rid yourself of one giving you trouble, head for the man in a blue cap; the doctor is in. His office is a table set up amidst throngs of revelers.

It’s no wonder that Marrakech has drawn eccentric writers, rock stars, movie stars and travelers for years. I had no doubt that when I exited my flight on Royal Air Maroc, a few steps behind Laurence Fishburne in Casablanca, that he was headed to Marrakech.

Sitting at a table in a sleek restaurant called Compoir a few nights later sat Susan Sarandon, looking gorgeous. I happened to be visiting while the Marrakech Film Festival was under way.

What is more amazing was the day spent shopping ancient souks and living in the past, a time when bargaining for goods was a way of life.

Wizened faces etched with worry dressed in the hooded jellaba sharing equal billing with movie stars could only make sense in this city beneath the snow-capped Atlas Mountains. I was almost convinced that a Berber rug I bargained for might just be able to fly; almost anything can happen in Marrakech.

Below my balcony at the Les Jardin de la Koutoubia the sun reflected from the pool onto ochre colored walls, the fireplace at the pool’s end glowing from huge logs, the mosaic’s design matching the mix of Marrakech.

The fourth of the five calls to prayers ring from the nearby Koutoubia Mosque lending the courtyard an authentic feel; true beauty in this Muslim city is often found within. 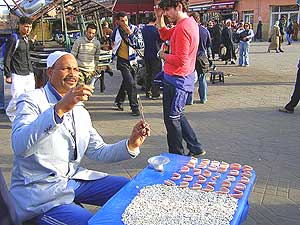 A souk (market) in Marrakech.

The hotel stands on the 13th-century Riad Ouarzazi. Sensibilities and custom dictated that the outer aesthetic look be plain, inside structures is where all is displayed, much like South America.

In Marrakech and the rest of Morocco the ability to stay in Riads is a huge draw at just about every level of style and luxury; these hidden stays offer amazing accommodations. A courtyard with open roof is central to the concept, as is the hospitality that is oh so important in Moroccan culture. Behind many doors in the Medina or old city are untold treasures in unique lodgings.

At some point you are likely to lose yourself in the Medina and frankly it is not a cause for concern but a guarantee that your are truly exploring a fascinating place. One thing is for sure, your shopping options will reach the skies. Souk it all up.

My Souk or Yours

Shop till you drop most likely has an Arabic and Berber translation, that’s what souks are all about and have been for centuries. The name is derived from the Arabic word suq, meaning market, or suqa in Aramaic meaning street. Today a combination fits — streets with markets.

Old custom dictates that individual souks specialize in goods such as leather, wool, metal works or fruits and meats. For the traveler the Kissarias is a good choice; it offers a combination of crafts and goods in a mixed fashion. Row after row of small stands under lig

hted and covered alleys offer a good way to integrate yourself. Shopping in Marrakech is a sport unto itself.

Never take the first price on something you want; it just isn’t done and takes the fun out of the salesperson’s day, literally. That doesn’t mean that a pack of gum should be bargained for. They start high, you bid low, then work your way up to the middle. Be civilized. It is a custom and, once you get used to it, fun.

It may just be worth carrying a spare bag to take with you; the assortment of ceramics, leather goods, metal works and clothing are amazing. This is the time to buy silver and coral necklaces or the best known Moroccan icon: the babouches, the pointed leather shoes.

For big purchases such as rugs, sweet mint tea will be served. It is all a part of the deal; drinking tea doesn’t obligate you to buy anything. If haggling isn’t your thing, or if you want approximate prices on crafts, head to the Centre Artisanal located in the Medina, a virtual department store filled with quality crafts at a set price. 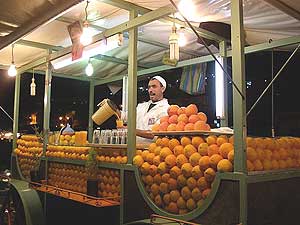 Outside the ramparts and down Avenue Mohammad V is the Gueliz Quarter, once know as the Ville Nouvelle. Cafes and shops fill the wider streets and travelers’ services such as ATM machines are easily found.

A cup of mint tea or strong coffee at the Café les Negociants will recall memories of Paris café society. The quarter is the place to best get a sense of life in the city when Morocco was a French protectorate.

The must-see in the area is the Majorelle Gardens, a colorful and peaceful oasis that will lower the highest blood pressure in a city that can raise it. The gardens were started in the 1920s by French artists Jacques and Louis Majorelle and include fish ponds and flowers of all shapes and sizes.

Yves Saint Laurent now owns the gardens and has a home on the property. Hidden in the Gardens is the studio used by the Majorelle brothers that now houses the Museum of Islamic Art. After a few days trolling the medina the gardens are a visual place for tranquility.

While the whole of the old city is a step back in time, there are two places that hammer history into place and should be seen. The first was uncovered only in 1917 and displays much graphic work of Arabic style, the Saadian Tombs. 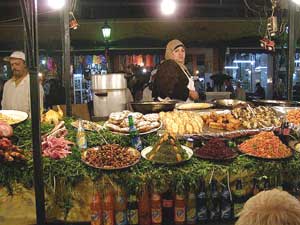 Sultan Ahmed al-Mans our built these tombs for himself and family in the late 16th century. The fact that they fell off the screen in the 17th century makes it possible to pass through a shoulder-width narrow alley to some of the most intricate mosaics known to the modern world. The two mausoleums are set in a garden symbolizing Allah’s paradise.

“Palace of the favorite” is the perfect place to feel favored; the Palis Bahia exemplifies it. The palace is actually two complexes. Luxurious apartments overlook gardens with fountains and trees. Marble from Meknes, tiles from Tetouean and cedar from the Middle Atlas comprise this amazing Paliais. The apartments of the harem and Ba Ahmed are all at ground level due to the one-time ruler’s obesity.

Monkey on My Back

As usual I ended my nights at the Place Jemaa el-Fna, a short walk from my room at the Les Jardin de la Koutoubia. Often I would find myself feeling as if I were dropped from a distant planet as snake handlers gathered the cobras and vipers from under huge tambourines and placed them in boxes strapped to the back of small scooters.

The monkey handlers would walk hand in hand with their charges into the twisted alleys. Storytellers gathered together to tell each other their own stories of another day in the square. The food stalls got dismantled and the hosing down and sweeping would begin, only to start again the next night, much as it has for centuries.

I often grabbed a glass of fresh squeezed orange juice, badly needed after a night of dining and partying at sophisticated restaurants and night clubs in a place where the soul of Marrakech remains, the Jemaa. All too soon the only sounds were stray cats and the odd cart pulled by a donkey. It was then that I could relive my days in a city that transcends modern definition.

Info for Your Trip

The flight from NYC to Casablanca is only six and a half hours and quite comfortable on Royal Air Maroc. The flight was comfortable and the amenities just fine. Air travel from Europe to Morocco is frequent and many low-cost airlines are in play.

In Marrakech, as in much of Morocco, your lodgings can play an important part of your visit. It is the place of the unique riads. The translation in Arabic of riad is garden so theoretically riads have a courtyard with trees and plants as well as a fountain or pool.

These traditional style residences have over the last few years have developed into an industry of their own. From luxury to modest most have been redone and refurbished into a restored oasis in the midst of medina chaos.

Here is a listing of many riads.

My hotel Les Jardin de la Koutoubia was done in the riad style and its location right in between the Mosque Koutoubia and Place Jemaa el-Fna just perfect. The rooms were styled Moroccan. It had all the amenities yet was private and relaxed.

Moroccan food is richly flavored and spices are a central part of the dishes. If you do not know that Tajine is a spiced stew type dish made with chicken or lamb and served in a conical ceramic dish, you will by the time you leave. It is guaranteed to be the main dish served at any traditional restaurant. Round loafs of bread called Kesra and Couscous are also regulars.

Marrakech also has a vast selection of European and Asian choices, usually very upscale and decadent. Several double as music venues after serving hours. Consider the choices as varied as any cosmopolitan place in the world. I love Marrakesh.com

Of course, once you get your feet on the ground and establish contact with the city, the Place Jemaa el-Fna is a great place to chow, prices and choices are as numerous as stars in the skies.

A few will take getting used to such as sheep brains and other non-western delicacies. Most like kababs and fish are grilled on searing hot coals and perfectly safe. One thing is for sure, you will never get to eat with as many people in a place as interesting anywhere else.

For details on customs, sites and everything Moroccan, the Moroccan National Tourist Office has a very detailed website: VisitMorocco.org.