Belfast, Northern Ireland, has put down the guns and opened its arms to the world. The agreement, brokered with the help of the US back in 1997, paved the way for an intensive construction and improvement program.

The only sign of “The Troubles,” as the years of violent sectarian conflict are known, is the extensive collection of wall murals that still adorn both the Falls Road and Shankill neighborhoods. The most appropriate mural said it all: “Life is too short for this shit!”

Besides these fierce paintings depicting hunger strikers on Falls Road, or Thomas Cromwell in Shankill (there are more than 700 murals across these neighborhoods), the city has reduced security and welcomed a state of ‘normalcy’ that has brought prosperity and even tourists. We had a craic (a rockin’ good time!) during our December 2005 visit.

Today, Belfast’s police stations have replaced 35-foot-high fencing bristling with cameras with the kind of façade you might find in a modern office building. Even the new courthouse has walls made of glass. “Can you believe it?” was the reaction of one Belfast resident.

It is a joy to visit a city where security is being relaxed, where the emphasis is on getting back to normal, pulling down walls and reducing checkpoints, searches and paranoia.

A December trip to this city on the Lagan River was highlighted by a river tour to view the exciting plans to transform the vast empty expanse of docklands into a conference center, hotels, shops, and new high-tech businesses, expanding an already impressive waterfront into something even more impressive.

Everywhere I looked I found a city building, improving and making a serious play for a stake in the enviable tourist dollars that come in such abundance in the to the south.

The fabled ocean liner Titanic plays an important role in Belfast’s transformed infrastructer in embracing a future of high technology and tourism. The city is home to the largest museum centered around this historic ship and its fabled journey. The ship was built in Belfast’s shipyard, and, as one local wryly observed, “It was in fine shape when it left here.”

Everything sank to the bottom of the North Atlantic except the captain’s desk, which still sits in Belfast; it wasn’t completed in time for the 1912 maiden voyage.

The novelist C.S. Lewis, famous for his Narnia book series, was born and lived here until he was shipped off to boarding school in England in his teens. The myth of the Narnia was inspired by the hills outside Belfast. You can see his boyhood home, “The Lea,” and his prep school. The library at Queens College is scheduled to be built in his honor.

Lewis loved the ‘Belfast Symphony,’ the name for the continual throb and roar of the great Harland and Wolff shipyards. “The sound of the steamer’s horn at night still conjures up my whole boyhood,” he wrote.

Lewis also loved the hills of County Antrim and the night sky. Dunluce Castle, abandoned and in ruins on a cliff by the sea, became the setting for his Narnia stories.

Another celebrity birthplace in Belfast is the row house where singer Van Morrison grew up, and where he wrote his famous lines about the “Brown-Eyed Girl.” Only a small plaque identifies this site since Morrison didn’t want a lot of attention drawn to the place.

Symbols of a Shipbuilding Past

Two huge cranes Belfastians call Samson and Goliath are all that remains of the city’s shipbuilding past. The yard sent forth its last vessel in the 70s. The waterfront since that time has undergone a number of improvements. One big problem — the horrific smell at low tide — was corrected with a lock system that keeps water in the Lagan high at all times.

The city’s bird and marine life has flourished because of the enhancement of water quality. Meanwhile, with a growth rate nearing that of its prosperous neighbor to the south, Belfast shows signs of its progress everywhere. In the middle of the city, a large swath of land was dug up to provide underground parking for shops and restaurants.

A City Built on Linen

The city was built on linen, its biggest cash crop. Flax that grew in the surrounding fields was turned into the finest tablecloths and clothing for royalty. Eugene McConville, who lives outside of Belfast in County Antrim, still practices the art of ‘scutching’ or whacking the fibrous stalks to remove the insides. He uses an ancient machine powered by the water in a nearby stream. In Lisburn there is an interactive museum where you can follow the history of linen production from the flax plant to looms where it was made into thread.

In Belfast today, there are many more first-rate hotels than in the past. Former Maine Senator George Mitchell, who helped broker the peace agreement, stayed in the Europa during the negotiations. While now a bit faded and worse for wear after being bombed more than 40 times, this city landmark still attracts many visitors.

We chose the Mal Maison, a very chic modern hotel built from a converted mill building on Victoria Street. The only complaint is that it is so dark in the lobby you feel as if you’re checking into a teenager’s room. Trying to read the paper over breakfast in this dim light is a serious challenge. Nevertheless, there is an ambiance here, enhanced by the jazz and lots of candles, which gives it modern, cool feeling – perfect for Generation X guests.

Any visit to Belfast must include the neighborhoods made famous by “The Troubles,” the guerilla war between supporters of an independent republic and those who favored remaining a British colony, persisted here between 1969 and 1997 with more than 3,000 casualties. The Catholic Falls Road neighborhood is where you’ll find the large murals depicting the Irish Republican Army’s martyrs, the hunger strikers, and many images of Ireland in chains.

Turn the corner, drive up the hill, and soon you’re in Shankill, where the artwork features glorified images of the Queen Mum and Thomas Cromwell, a host of Union Jack flags, as well as the requisite hooded gunman and lots of other incendiary symbols of the conflict. Though fear and death are in the past, new murals are still being painted on both sides.

Residents agree that the city center is neutral. Here, instead of murals, you find first-class restaurants like Paul Rankin’s Cayenne, where we had some of the most succulent chicken I’ve ever tasted, paired with an excellent syrah.

Nearby, Zen features round booths and a Japanese/Chinese menu. Entrance to these booths is lit by spotlights with long hanging chains all around them and mirrors that allow you to peek into the other booths and see what’s on your fellow diners’ plates.

The highlight of any trip to Ireland is music. We found a lively scene at Fibber Magees, where a raucous crowd had gathered on a Wednesday night to hear Brier a folk trio which belted out songs most of the locals knew and encouraged dancing and general carrying on, augmented by many pints of fresh Guinness. This drink is so much better here than in the States. Its creamy head and sweet taste make the music sound just a wee bit better.

We drove north to County Antrim on the northern coast to the glens of Antrim. Here we clambered over the most famous attraction in Northern Ireland: The Giant’s Causeway. Curious hexagonal-shaped rocks spread out from beneath the cliffs and disappear under the sea, as if nature had designed a patio. The surf crashes on these rocks, while six-sided columns rise up as high as 40 feet above the waves. It is a wonder to see and like no other place on earth.

Another landmark worth a visit is the Old Bushmill’s Distillery, where they have been making triple-distilled Irish whiskey since 1608. The river Bush winds its way through the little town.

En route we passed through Ballyclare, where actor Liam Neeson grew up and where his family still lives.

Our guide, Ken McElroy, a published playwright, graced his city tour narrative by reciting poems by W.B. Yeats, as well as some of his own. Like most of the tour guides in the UK, Ken earned his Blue Badge by a long process of education in the history, culture and geography of his country.

County Down was once described as looking from above”like a basket of eggs,” with the green hillsides bordered by hedges and dotted with sheep. Here St. Patrick arrived as a slave, and rose to bring Christianity to the pagan Ireland and now a museum and visitors center tells his dramatic story of faith.

A theater with five side-by-side screen zooms a sweeping filmed scene of flying over nearby cliffs and beaches, shot very low from a speeding plane. The surround vision is startling and the story of Patrick is well told. The famous saint’s grave is right outside the small cathedral where services are still held to a small but loyal congregation.

For general information on Northern Ireland and Belfast, visit 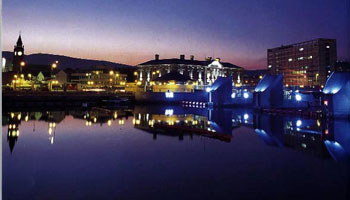 Check our listings for flights to Ireland

Japanese and Chinese cuisine in a unique round booth atmosphere

Sophisticated, stylish
Owned by Paul Rankin, one of Belfast’s most famous chefs

Love Ireland? Take dozens of travel articles to go on your Kindle with our Ireland Plane Reader.

blogs.gonomad.com/readuponit
Like this article? Share it with your friends!
If we've inspired you to travel with this story, why not check out the prices to get there and make it happen. Search airfares, hotels, and rental cars here. Thanks!