Around the World on 50 Bucks 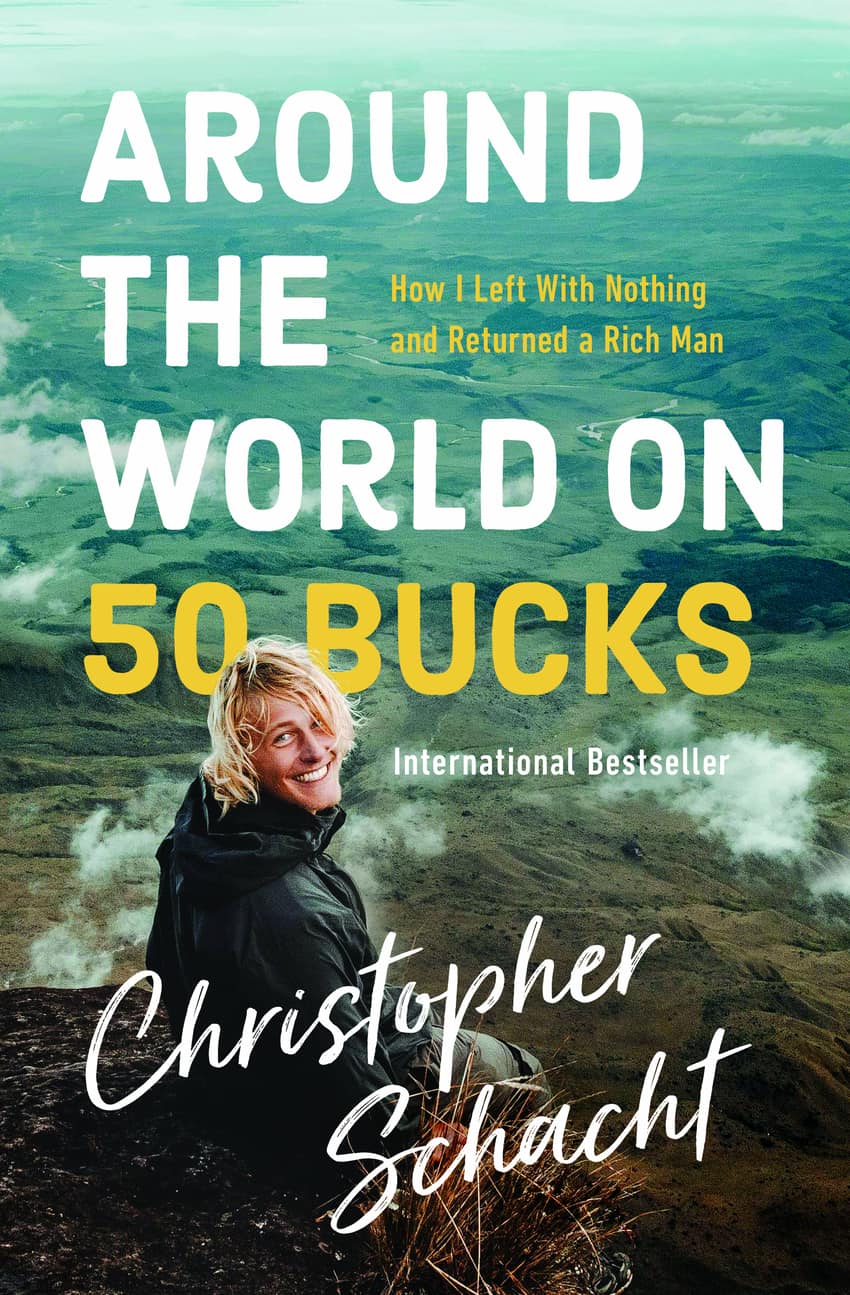 Christopher Schacht Left with 50 Bucks and Returned a Rich Man

The Best Things Happen When You Least Expect Them. Nineteen-year-old Christopher Schacht had a full scholarship in computer science waiting for him when he decided instead to embark on a trip around the world with only fifty bucks in his pocket. No credit card. No schedule. No backup plan.

Hitchhiking across the Atlantic, journeying through the jungles of South America, and finding food and friendships across forty-five countries for the next four years was a greater pursuit than Christopher had even imagined. As he embraced whatever culture and work opportunities came his way, he learned more about himself, about God, and about what it means to be truly rich.

Come along for the adventure and discover how Christopher’s story can inspire you in your own journey. Around the World on 50 Bucks is packed full of daunting challenges and unexpected joys, reminding all of us what it means to live out our dreams.

I read an email with trepidation: “Some friends of ours accepted our invitation a couple of days ago. We would like to take them with us. Unfortunately, there is no room left for you. We wish you well. Good luck!”

I read the e-mail twice. What!? Like a dark cloud, an oppressive heaviness surrounded me. It was devastating. My smile vanished into fatigue and a headache. I literally had to hold my head up with both hands so as not to let it hang down.

What was I supposed to do now?

I forced myself to take a few deep breaths. It wasn’t the cancellation itself that disturbed me so deeply but the timing. The best time to find a boat had almost passed. It was now the end of March.

I had spent the optimal time for finding a ride waiting for the Australian boat.

My chances of finding a place were slim indeed. I ruffled my hair in desperation. The words the Australian had said just after shaking my hand echoed in my head: “I took your advertisement off the message board.

You don’t need it anymore.” I asked, just to be sure, if I should keep any other irons in the fire. He had said, “No, that won’t be necessary.”

All of that and not a single, solitary word about perhaps inviting friends instead of me. That lying—I paused. Even though everything inside cried out to curse him, I did not want to break my new resolution.

I had firmly decided to never wish ill on anyone.

But the frustration had to come out somehow. I changed tack. I would not curse them but bury them in blessings: Have a good trip! Good luck! Sunshine! Health! Safety! Coconuts! Peace!

“I’m back to looking for a boat,” I told my Panamanian hostess, to explain why I was back in Shelter Bay. “I’m sorry to hear that.”

“It’s okay. I’m sure something better will come along.”

I did not give her that answer because I was feeling optimistic.

On the contrary, it was obvious that my chances were pretty slim, and I did not feel certain. Don’t doubt what you can’t see—even if you don’t feel like it. Now that is true faith!

To beat the traffic, I got up before daybreak and rode the bus to the north side of Panama. That morning I took up where I had left off exactly one month ago. My fears were confirmed. A month ago five boats left the canal every day, whereas now the number had dwindled to one or two. And many of these were headed toward places such as Mexico or Chile. That’s not where I was going.

However, there was also something good in store for me. I met some old acquaintances, including a Swedish guy about my age whom I had met on Gran Canaria. He was on a trip similar to mine. There he was, sitting on a lawn chair in the shade of a little house, looking at the docks. He started his trip by riding a bike from Scandinavia to Portugal, and then hitched a ride to GranCanaria.

I couldn’t help but shake my head in disbelief. “How long have you been looking for a boat?” I asked.

“A couple of weeks.”

“You sure know how to encourage a guy,” I laughed. It may not have fit the circumstances, but I was somehow feeling upbeat.

“Checkmate!” my opponent smiled at me. We were now tied with one win each.

The next match would seal my fate. Our fingers flitted over the board, returning the pieces to their starting places.

“How long are you going to stay here?” I asked my chess partner, who was from the Flemish part of Belgium. He was on a trip around the world with a South African captain.

“Not much longer.” We turned the board around, and the Belgian opened the match with his knight. “I’m not traveling just for fun anymore. I’m mixing business with pleasure.

I’m filming myself for a TV documentary: In 80 Dates Around the World—that’s what it will be called.

I laughed so hard that I almost knocked over a chess piece by gasping.  He looked at me. “And you, how are you paying for your travels?”

“With any job or opportunity I can get my hands on.

In Venezuela, I remodeled a bathroom for the military police,  in Guiana I dug for gold, in Rio de Janeiro I sold fruit salad on the beach, in Peru I pumped fuel at a filling station, and here I help take boats through the Panama Canal.

“True.” He nodded in agreement and took my rook. “But surely your room and board must cost more than you make with all those odd jobs.”

“As far as housing, I usually sleep in my tent or my hammock, and sometimes in someone’s house if I am invited. I usually hitchhike for transportation, so that doesn’t cost anything, plus I get to make friends with new and interesting people. Then it is a win-win.

I never eat in restaurants, and I don’t go to bars.”

Now he had to laugh as he kicked my queen off the board. “I get your secret. Lay off the beer, and you have plenty of money.”

“That’s about right.” I winked at him. I surveyed the board and

laid my king down. Defeated. I talk too much! Satisfied, the Belgian leaned back and said, “Come by our boat for a bite to eat later this evening. What do you say?”

The captain of the sailing yacht was a white businessman from South Africa. He had met the Belgian almost twelve years ago in Venezuela. Way back then, the businessman had asked the Belgian if he would sail around the world with him if he were to buy a boat.

“Um, yeah! Of course!” was his spontaneous answer. They kept in loose contact, and ten years later the Belgian’s phone rang. “Hi, I bought a boat. Do you still want to sail around the world with me?”

“Um, yeah! Of course!” was his spur-of-the-moment answer yet again.

They had started their voyage around the world one year ago in the Mediterranean and would end the journey in Africa, after a full two years of sailing.

Crossing with this yacht would be a blast! Too bad they already have enough men on board, I thought.

Although there was no boat in sight for me, the time had not been wasted. Most importantly, I made some new friends. The Belgian and I played chess again the next day; then the captain and I went swimming and had deep conversations about South Africa. At sunset, we had a braai—the Afrikaner’s term for a barbeque.

“Christopher,” the captain and the Belgian had stepped aside to talk and were now waving me over.

“We understand if you have other plans, but would you like to sail across the Pacific with us?”

Other plans? Not on your life! “Of course!” I said, excited and smiling from ear to ear. The next day would mark seven days since the Australian canceled on me. Despite all my fears, something better did come along!

Christopher Schacht grew up in the village of Sahms, near Hamburg in Northern Germany. In his travels, he encountered many different cultures, fascinating landscapes, dangerous adventures, great hospitality—and the Maker of all the greatness. He also met the love of his life, Michal. Returning to Germany in September 2017, Christopher began to study theology, and in June 2018, he and Michal were married.

Around the World on 50 Bucks: How I Left with Nothing and Returned a Rich Man