Pangani, On Tanzania’s Coast: Hard to get to But Worth Finding! 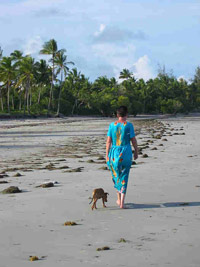 Most of the ever growing number of visitors to Tanzania make a point (or are persuaded to make a point) of stopping off in the ‘spice island’ of Zanzibar before their East African safari comes to an end but few thus far seem to have been lured to the tranquil beach setting of the mainland, just across the Indian Ocean.

Admittedly, it is not terribly accessible as tourist destinations go, but that is part of the fun and it is most certainly well worth the effort for those who, like myself, generally seek out serenity in a real hide-away of tropical beauty and peace, rather than the hustle and bustle of the noisy and expensive tourist resorts. If relaxation and a haven to pursue your passion… be it reading, writing or just being!… is what you are after, this is definitely the direction to head.

The Village of Pangani

Although there are a number of alternatives, Pangani is my personal favorite. This tiny village (situated approximately 100 km south of Tanga and 170 km south of Mombassa) is still truly a tropical and unspoiled paradise. Chartered flights will soon be introduced but 4WD self-drive from Arusha (a 6-hour trip) is also very much a possibility.

The journey by road in itself is a bit of an adventure. On one of our recent trips, driving along the dirt short cut (a 43km stretch off the main Segera-Tanga road) I was astounded to see an elderly Islamic/Swahili man sitting at what appeared to be a kiddies table and chair, in the middle of the dirt road, whilst his wife poured him tea (chai) from a toy tea set. A prize photographic experience!

Another anomaly along the way – aside from the miniature mosques and prayer centres – is the frequent occurrences of weather-torn political flags, much in evidence in the numerous rural farming and/or fishing villages. In one such settlement the local representatives of each of the dual political parties were obviously very much in competition… denoted by the fact that each had ‘planted’ their flag (to which ‘flagpole’ was attached their bicycle) directly alongside the flag and similarly attached bicycle of the opposition party.

Villages mostly consist of wattle and daub huts and dukas (shops), topped with masakasaka (dry leaves) or palms, but occasionally one does see the odd ‘European-style’ dwelling, tiny and precise and (in my opinion, a blight amongst the huts) with often precisely laid out and meticulously kept gardenettes; probably the homes of chiefs or spiritual leaders… or perhaps just a village elder.

Everywhere en-route one has to avoid the usual African menagerie of ducks, chickens, goats and cattle, not to mention hoardes of watoto (small children), all waving and hollering “mzungu, mzungu” (white man) in excited chorus.

Although now only a small boondocks town, Pangani was once one of the Swahili coast’s main hubs in terms of trade with the African mainland. It was a major trading port dealing mainly with ivory and slaves. An ancient settlement, it is believed to have been established as far back as the 6th century BC.

Dilapidated dwellings along Pangani’s main road give one at least some idea of it’s history as it boasts both Arab/Swahili and Colonial architecture, now desperately in need of repair and a good coat of paint. Pangani thankfully lacks the air of ‘intimidation’ so prevalent in so many African towns and visitors can still safely walk around alone to view some of the remaining historic sites.

Ferry Across the River

As you near the massive Pangani River and prepare to board the quaint and irregular ferry which carries vehicles and passengers to the southern bank, you cannot help but be struck by the beauty of the surroundings. Perched atop the densely vegetated cliff on the far bank, you can vaguely make out the outline of a large complex with phenomenal views of the area.

This, it turns out is a white elephant – the only attempt (thus far) by a hotel chain to invest in and offer luxury accommodation and all the trappings, along this stretch of coast.

It failed purely (I am told) due to the fact that visitors prefer to camp or lodge within walking distance of the warm and inviting turquoise waters of the Indian Ocean. A cluster of such facilities now exists in Pangani itself, but we need to drive a further 20km or so south to reach those that are more remot, so we continue down the bumpy dirt track through fields of sisal and rice, interspersed with gorgeous tropical forests and grasses in search of our paradise experience.

Eventually we reach some modern signposts and turn off left towards the ocean, which had been teasingly glittering in the distance until now, alluring and beguiling in the sweltering heat and humidity. The road winds and bumps until we suddenly find ourselves driving on sun-blenched white beach sand and meandering through a forest of coconut palms.

Suddenly utopia stretches ahead, a literal feast for travel-weary eyes. Along a stretch of seemingly endless palm- and coconut-fringed beaches, you can now approach beautiful eco-friendly lodges that are dotted along the coast * for your rest and respite. If you arrive during the off-season you may even be lucky enough to have the entire place to yourself.

Despite its secluded location, if you do want to indulge in more than just reading, writing or ‘being’, there are a number of alternatives. Totally non-commercial as it is, snorkelling or deep-sea diving trips can be arranged with local fishermen.

These Swahili fishermen, who spend 12 hours at sea seven days a week, are also more than willing to offer their services and shuttle you to and from the sandbanks offshore for a picnic in the sun.

Although their ngalawas (wooden outriggers) are of somewhat crude manufacture, these small boats cut through the ocean like a knife under the hands of these experts. Even under rough sea conditions, their bare chest muscles well defined in the glittering heat, they leap agiley from one area of the vessel to another in order to keep it stable, as though they had been born to it.

The coral reefs aren’t far offshore, so for the more energetic, a short swim will get you to this incredible underwater dreamscape.. or you can take a boat out to a small sand island, Maziwi (newly designated a marine reserve) which rests on the coral reef. Most lodges offer windsurfing, kayaking and dhow rides as well as fishing trips.

Longer excursions, such as those to Zanzibar island (by motorised dhow), a cruise up the Pangani river to view the mangroves and birdwatch in the rich forests of the interior or possibly even a drive further south to the recently demarcated Sadaani Game Reserve are easily arranged.

I’m not sure what your culinary delights might be, but if fresh fish happens to fit into that category, you certainly can’t go wrong here, if however, your preference is for fresh fruit, vegetables or meat instead, all are readily available and on order at the lodges. But hey, how can words alone describe such a wonderland… let the photos convey some of what I have attempted to. Think about it for your next East African trip though… it is well worth the effort.

Terry Harnwell writes from her home in Arusha, Tanzania.