Brookgreen Gardens: An Oasis of Art

Brookgreen Gardens, Near Myrtle Beach SC: You MUST visit!

We drove out of Myrtle Beach heading south, past the world’s longest selection of chain stores, big boxes, tacky seafood joints and a lot of scrub emptiness, until we reached a striking aluminum statue of two stallions, reared up on their hind legs, in battle. We were just south of Murrell’s Inlet.

We had reached the entrance to Brookgreen Gardens, an impressive 9,100-acre sculpture park, botanical gardens, zoo, and a local history center.

The number of sculptures, 2000 works by over 400 artists, is extraordinary, as is the story of how the former rice plantations became Brookgreen Gardens.

It started in 1932 with a New York City-based shipbuilding tycoon whose wife needed to get out of the city for health reasons.

Scion of a Baron

Anna was a sculptor and she wanted a place to show her work and the works of other great artists. 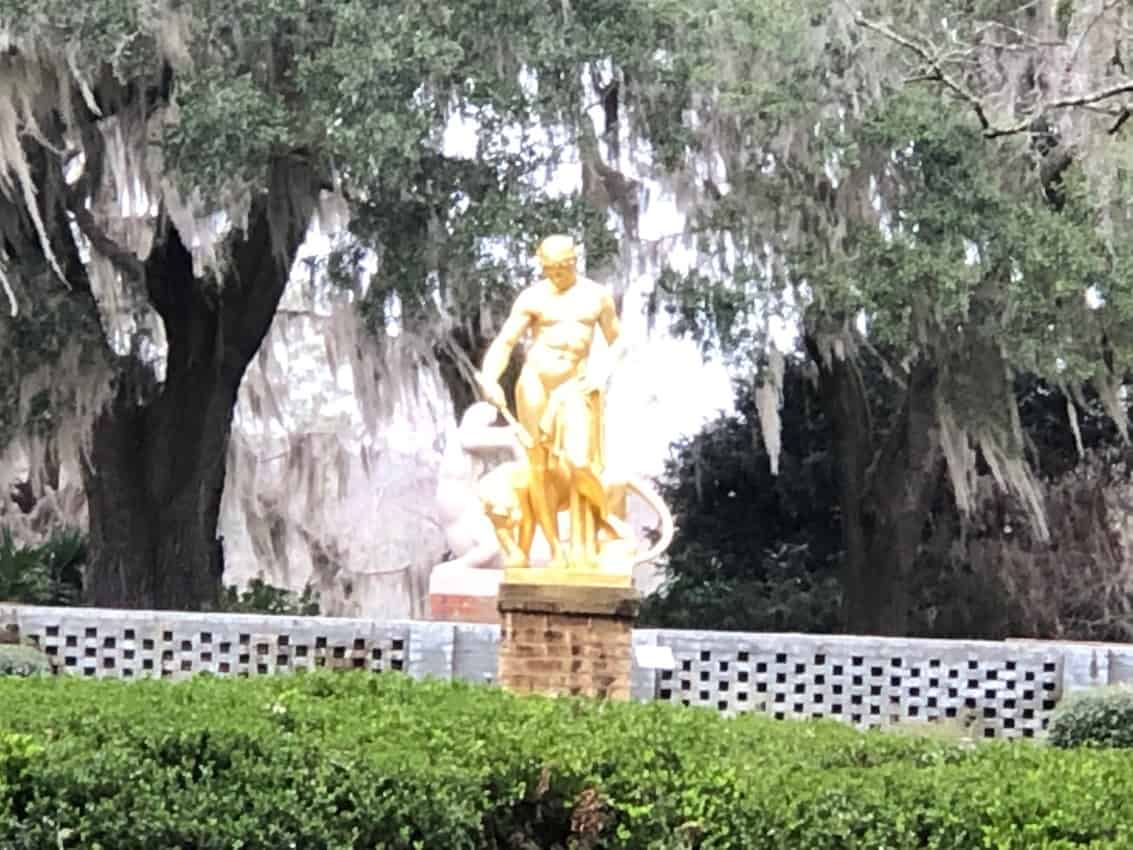 One of the plantations was owned by a man with a dubious reputation–Joshua John Ward has the distinction of being America’s largest slave owner during that pre-Civil War era.

Touring the massive park, there are so many sculptures, both inside and out, it’s mind-boggling. Each is presented in a setting that shows off their attributes, either inside a round pool of water, or perched inside a lovely open airy pavilion, or with distinctive pedestals that show off the old school works of art.

But there is a lot more to Brookgreen than the art.  On the sprawling property, they offer pontoon boat rides from March through November along the historic rice fields where alligators, osprey, and other wildlife are on display.

There is a low country zoo, featuring live animals from this part of the south. Many of the animals here are rescues.

But besides these animals and the presence of so much art, there is another human component of Brookgreen that really resonated with me.

Brookgreen offers programs that share the story about the Gullah Geechee culture. These are the African-Americans who populated a large swath of the coast, from Wilmington NC to St Augustine Florida.

Learning about the Gullah Geechees

At the garden’s Low Country Center, we heard Ronald Daise share some of the history and a song that celebrates the many reasons Gullah Geechees are proud to be what they are.

The language of the Gullah is much like you’d expect from a rural African-American from the south.  Dis = this and dat = that etc.

He sang in a deep baritone voice the song that explains what makes the Gullah Geechee who they are, people who eat rice, came originally from West Africa, and who live in this part of the south.

Along with Paise’s impressive singing presentation, we got a chance to learn how Corey Alston weaves his baskets with a hands-on demonstration.

Some of the highlights at Brookgreen are the Nights of A Thousand Candles, where the property’s live oaks are decorated with more than two million LED lights twinkling.

They are also building a new pavilion where they will present a variety of musical shows this summer.

If you’re going to Myrtle Beach, this is definitely worth visiting!