The sun sinking across the Wadi Mose’s Valley highlighted the rose-colored Sharah Mountains. While that sight is a treasure, the real prize is hidden deep within. Petra, the Rose City, is one of the world’s best archeological sites and truly Jordan’s treasure.

Many years ago I watched Harrison Ford in Raiders of the Lost Ark discover a lost city. I soon was to hop on my own charger and head into that city carved into the sandstone cliffs. First, however, I had the converted from village to hotel of Taybet Zaman to explore.

The Steam’s the Bomb

Based on an African proverb, it takes is a village to raise a child. Taybet awoke the child in me. The rustic abandoned stone buildings from the 19th century have been beautifully redone in Bedouin style furnishings and have loads of space.

The hillside is bordered with olive trees, and paths ramble throughout. The highlight of my stay, however, was the authentic Turkish steam bath found in the complex; for $12 you get steamed, massaged and scrubbed. 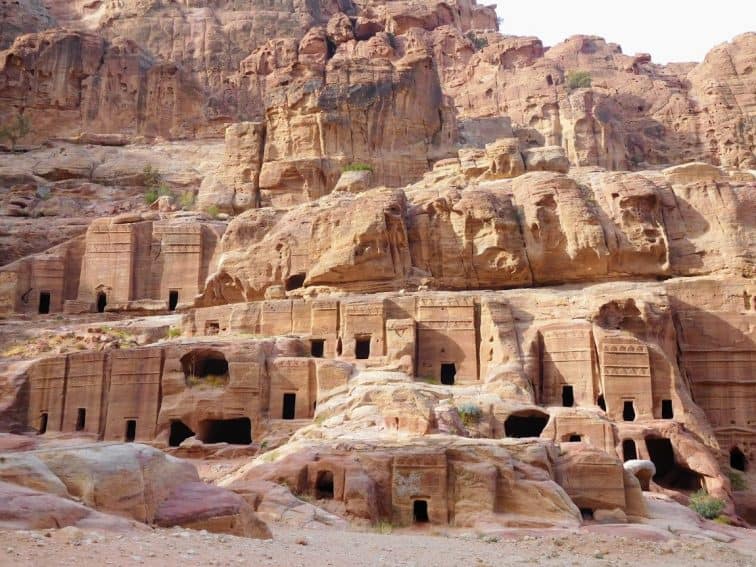 Petra: Be Still My Heart

Walking through the Siq (narrow path through cliffs) is in itself an amazing occurrence. The winding passage is wedged between two sandstone cliffs that soar skyward at over 1000 feet. Once you reach the end and enter Petra you will be stupefied! The Treasury or Khazneh slams you in the face and everything else fades. You slide back anywhere from 400 B.C. to A.D. 106 when Petra was the ancient city of the Nabataeans.

The city was once the crossroads of flourishing overland caravan trade routes. Its last big days date from A. D. 379 when earthquakes erased it from all but some Bedouin inhabitants thousands of years later. A Swiss adventurer named Johann Burckhardt dressed like a local in 1812 and followed up on rumor.

He headed into the city of Rose. Fortunately for travelers today, Burckhardt couldn’t keep a secret! Petra is a UNESCO site and offers wide-open exploration.

Legends of Petra abound, such as the visit by the Queen of Sheba and payoffs to Pompey to leave the city alone. The ornate cliff-faced tombs, baths, and banqueting halls all interspersed with homes and upward stairways provide days of exploration. Bedouins today offer horses, camels, and donkeys for those who want a bestial powered exploration. Best is to climb anywhere and everywhere. Stairways etched seem to go in all directions.

The climb to the Monastery is long, hard and worth it! Every panorama changes with the whim of sun and clouds caused by over 20 different shades of stone.

The architectural fusing of Assyrian, Greek and Roman only adds to the drama that is Petra.

Pull up a Goat Tent

Wadi Rum has connotations that lead to Bedouin, camels and Lawrence of Arabia. While overnighting at the Captain’s Table is an option, I am there for a quick exploration of desert fantasy.

Fresh fruit, lamb kabobs, and other offerings are laid out under goat-haired tents.

The wind whips and sand blows. I fought flies for my meal. Yet the music played on ancient instruments was mesmerizing. Like a sated sheik I sipped at black cups of tea and dates.

Soon I was out via jeep to the big Wadi. Geologists think that the Wadi resulted from a big crack in the earth caused by upheaval, leaving what you see today.

Huge sandstone ridges are over 1000 ft high and rounded by the wind with massive sand dunes splayed beneath.

One can immediately see how T. E. Lawrence’s description fits aptly as, “vast, echoing and God-like”. It seems unbelievable but underneath that entire desert are water and springs. These springs made the Wadi a place for caravans to congregate and meet.

Since the Neolithic era travelers have gathered under its towering cliffs. The tradition of Bedouin hospitality is still evident today. The etched pictographs on cliff faces reminded me that I am not the first to pass by.

Aqaba: Going Down in the Red Sea

In stark difference to the desert environment of Wadi is the nearby city of Aqaba.

Located on the Red Sea it is a premier diving stop, as well as a place to soak up rays. It is also Jordan’s only water port. Since 2001 Aqaba was granted a special economic zoning so prices on goods and services can be considerably cheaper than elsewhere in the country.

The zoning has brought many new hotels on the beach such as the Movenpick I stayed in. The town center is a dense network of streets and alleys. The center is also where you will find many shops, small hotels, and restaurants.

The city also has some historical treasures such as the Malmuke Fort and remains of the oldest church known. At night I watched the lights of Israel’s resort city Eilat. Also visible across the sea is Egypt’s Sinai Coast. While both also offer Red Sea diving, the statistics give Aqaba the cleaner edge.

The Sinai’s coast gets two million annual dives and Eilat about three-quarters of a million dives. In comparison, Aqaba averages only about twenty thousand dives annually.

Aqaba as a relative newcomer maintains and monitors its reefs. Inaugurated by the late King Hussein in 1985, the Royal Diving Club opened. The club was established to promote safe and ecological diving and snorkeling at affordable prices. With over 400 varieties of coral and 1500 species of fish, Aqaba fills underwater dreams.

Fortunately, the variety of nightlife keeps pace. Dining outside in the balmy sea breeze on specialties caught that day was a perfect way to end my Jordan sojourn. Jordan summed up, “while small, Jordan has it all”.

The Jordan Tourist Board is a wonderful place to get info on all needed to plan your trip through Jordan ’s treasures. They have many good pictures and practical advice on deciding where to go and what to see. Their response time is excellent and very cooperative. With no oil reserves, Jordan depends on tourism. The friendly demeanor of people met throughout my trip was comforting these days.

Hotels in Jordan run the gamut from tent to top ten in most places. Here are some winners.

The Taybet Zaman was truly special in both style and location. The buffet in the old stables was filling and delicious. It is located some distance from the ruins so factor that in. asiatravel.com/jordan/petra/taybet/

Closer to town and less money is

Valentine Inn – Known as one of the best budget hotels in Jordan. Free transportation to the entry gates and sizable meals are two big pluses. valentineinn@hotmail.com

In the town of Rum is the Resthouse, state-owned but privately run. Here you can arrange anything that can be done in the Wadi, Bedouin stays, treks by camel or jeep. Feel like a candlelight dinner in the desert, here is where you can arrange it. jordanjubilee.com/visitjor/rum1.htm

The Movenpick is grand and large with many seaside options. Its beach is a perfect place to do nothing or everything. The walk into the center of town is pleasing and short. Cheaper and in town.