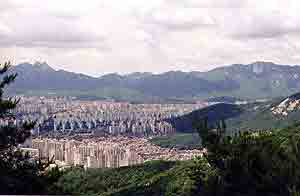 Barefoot parks and more in the giant city of S. Korea

Seoul, the largest city, is located in the northwest corner of South Korea.

Seoul is a vibrant East Asian city where you can experience both modern and traditional Korean culture. It is one of the world’s 10 largest cities and, despite being the capital of South Korea for over 600 years, most of the city is newly rebuilt after being flattened during the Korean War (1950-1953).

Spring and Fall are the best times to visit Seoul as with the rest of the Korean peninsula. Spring is cool and offers a delightful bouquet of blossoms and flowers. Fall is warm well into October when the leaves turn vibrantly orange, red and gold. Winter is bitterly cold and dry whereas the heat and humidity in the summer can be quite oppressive.

Most international flights arrive at Incheon International Airport , located about one to two hours—depending on traffic — by car or bus from central Seoul.

The easiest and most convenient way to get around Seoul is by using the extensive and inexpensive subway system. Station names are printed in English on most subway maps and are announced in both Korean and English on the train. Local buses are useful but typically require some knowledge of the Korean language as each major destination is printed on the side of the bus in Hangul (the Korean alphabet). 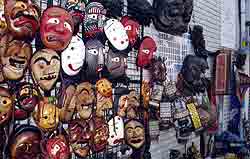 Not far from the center of the city is the popular alleyway called Insadong . Here, you can easily spend the afternoon browsing small shops full of antiques, such as old paintings, calligraphy, ceramics and woodworks, then dip into a traditional teashop for a snack and end the afternoon looking around one of the many art galleries in the neighborhood.

Every Sunday the street is blocked off to traffic and opened up to antique stalls, food stalls, street performers, and other kinds of street entertainment. If you have one day in Seoul, this is where you should spend it.

For those interested in traditional Korean culture, a visit to Kyoungbokgung is a good start. You can double your trip to the “ Palace of Shining Happiness ” with a visit to the National Folk Museum where you can get a sense of what traditional life was like. If you prefer spending your time outside, then check out Changdeokgung and its lovely Secret Garden. Or, if ceremony is your thing, then try Deoksugung , where you can catch the “Changing of the Royal Guards Ceremony.”

For those interested in reflexology or foot health or both, a visit to one of Seoul ‘s various “barefoot parks” would be a relaxing addition to a day exploring this city. Located in various parks around Seoul, these special walking paths are made of various types of rocks, such as amber, gemstone, granite and gravel. Aside from providing relief from foot fatigue, these foot paths are said to improve blood circulation and activate the functions of internal organs.

If shopping isn’t your thing, then why not put on some hiking boots and head to the hills. Seoul is surrounded by mountains, all of which have easily accessible trails. Some of the most popular hikes are on Suraksan ( san means mountain), Dobongsan , and Bukhansan .

A great way to unwind after a hectic day in the city is to soak in one of Seoul ‘s numerous bathhouses ( mokyotang ) or saunas ( jjimjilbang ). Bathhouses can be found all over Seoul, however the new spa-like facilities are found south of the Han River in Samsung area (near COEX) and the Teheran Valley (the “ Silicon Valley ” of Korea ). Similar facilities can also be found in most luxury hotels in Seoul.

The two most popular digs for backpackers are the Seoul Backpackers’ Hostel and the Seoul YMCA . The best deal in Seoul, however, is to find a good yogwan and there are plenty around, just look for the sign (which also means bathhouse). For a more familiar Western-style hotel, try the Hamilton Hotel in Itaewon and for the more well-heeled travelers try the Intercontinental Hotel , the Grand Hyatt Seoul or the Koreana Hotel .

Some of the best restaurants in Seoul are little hole-in-the-wall joints with plastic stools, menus on the wall and a staff of two. Knowing a little Korean will help you out in these restaurants or sometimes pointing to what you want will do just fine.

Entertainment in Seoul usually centers on shopping and therefore a trip to any of the major shopping districts will lead one to restaurants and drinking establishments. University students typically congregate in the Hongdae , Sinchon and Daehakno districts. Tourists often find themselves in Itaewon where a wider variety of restaurants and bars may be found.

If malls are your thing, then take a trip out to COEX. This massive “shoppertainment” complex houses Seoul ‘s main exhibition hall, an aquarium, the Kimchi museum and one of the largest theaters (17 screens) in Asia. There is also an excellent bookstore called Bandi & Luni’s, which has a fine selection of English-language books.

Seoul has great shopping opportunities. If you are interested in Asian city market-style shopping then you’ll get your fill at either Dongdaemun Market or Namdaemun Market . For more modern-style shopping, check out Myongdong or Apkujung . If you are looking for clothes and find Korean sizes a tight fit, check out Itaewon where shops cater specifically to Western tourists. Antique shoppers should be pleased with shops in Itaewon or Insadong .

All visitors to Korea need a valid passport. The KNTO internet site has a page with excellent information on passport and visa requirements.

Although no vaccinations are required to enter South Korea, vaccinations for hepatitis A and typhoid, as well as tetanus and polio boosters are recommended.

Healthcare in Seoul is readily available and relatively cheap. Most clinics and hospitals will ask for some payment at the time of the visit. Many doctors speak some English but your best bet is to visit a hospital with an international clinic.

119 is the emergency number to call.

The monetary unit in South Korea is the won, which is used for all transactions except for a few places in Itaewon where US dollars or Japanese yen may be used. Money can easily be exchanged at the airport or at a Korea Exchange Bank. 24-hour ATMs can be found all over Seoul and many accept foreign-issued credit cards and ATM cards.

Internet cafes, or PC bang, can be found all over Seoul. They are cheap and the internet connection is usually superb.

Changdeokgung: Take subway line 3 and get off at Anguk Station (exit 3).

Deoksugung: To get there, take subway line 1 and get off at City Hall Station (exit 1 or 2). The “Changing of the Royal Guards Ceremony” is held from March until December, every day except Monday, from 14:00-15:30.. 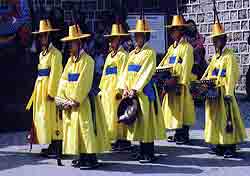 Korea House is located on near Chungmuro Station on subway lines 3 or 4. Reservations are necessary, call 02-266-9101.

Hongdae : Take Subway line 2 and get out at Hongik University Station.

Sinchon : Take Subway line 2 and get out at Sinchon Station.

Daehakno: Take Subway line 4 and get out at Hyehwa Station.

Itaewon : Take Subway line 6 and get out at Itaewon Station.

COEX: ( coexmall.com/english/index.htm ) Take Subway Line 2 abnd get out at Samsung Station, exit 5 or 6.

Namdaemun Market : Take Subway Line 4 and get out at Hoehyeon Station, exit 5.

Myongdong : Take Subway line 4 and get out at Myeongdong Station, exit 7.

Apkujung : Take Subway line 3 and get out at Apkujong Station, use Galleria Department Store exit.

Itaewon: Take Subway line 6 and get out at Itaewon Station.

For a more complete list of hospitals with international or English-language service, check out the Seoul Metropolitan Government internet site under hospitals and clinics.
Money