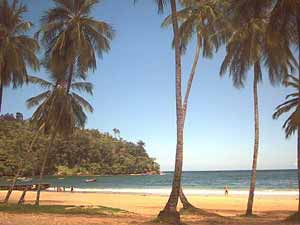 By Nadia Ali
Why go?

Trinidad is the southernmost Caribbean island,located 7 miles off the coast of Venezuela.It is a duel-island nation with its other half known as the sister isle of Tobago.

The capital city of Trinidad is Port of Spain that is home to the zoo, museums, botanical gardens and a business hub. Each coast has something to offer the West accommodates sailing enthusiasts, the East coast offers stretches of long sandy beaches, the South offers a view to Venezuela and the north coast offers Maracas Beach the most popular beach. The scenery in Trinidad covers everything from a rainforest, beaches, and moutains to the fields of tranquil sugar cane.

The best time to visit is during the cooler time of the year, although in the Caribbean their idea of cool is still pretty hot for the rest of us. There are two main seasons, the rainy season and the dry season. Unfortunately, when schools break worldwide for the long summer vacation this is during rainy season, so the best time to visit is from October to May where the average temperature is about 30C.

The most common way of getting around is by a mini van or “maxi taxi.” They are easily recognizable as they are mini 12-seater vans cream in color with red, green or yellow bands. There are also public transport, air-conditioned luxury buses that operate along the north/south route; these are the least expensive form of transport. There is also a new, privately owned, door-to-door yellow taxi service, which is more than other modes of transport.

You can also rent a car provided you present a valid passport, driving license, are over 21 years of age. The rates are comparable with standard rental rates and the companies offer the full range of cars and SUV’s for your convenience.

The road network is crowded as there is only one major highway that runs north to south, but be warned that the driving is somewhat erratic with cars overtaking on any side. Also, taxis tend to stop along routes without signaling.

The Caroni Swamp is a superb example of a Caribbean wetlands, where the national bird of the red Scarlet Ibis bird nests. To get to the swamp you first take a boat ride down the Caroni River where the tour boat operator points out the resident caimans and wildlife, taking you out to an open lake to experience the nesting of the scarlet ibis, with their beautiful red hue cast against the lush green forest.

The duel- island of natation of Trinidad and Tobago is moving ahead with their eco-tourism. They recently unveiled their 5.5 mile Eco-Adventure Trails Project. Hikers walk under the shade of the canopy layer of the forest while taking in the beautiful scenic stretch from Grande Rivière to Sans Souci on the Northeast coast of Trinida. These 5.5 miles of trails is just the start of the nations project to rehabilitate over 600 miles of trails, that were blazed by the first settlers of Trinidad and Tobago.

Trinidad also features a natural ecological phenomenon known as Pitch Lake. The natural asphalt lake is about 250 feet deep and is estimated to have reserves in excess of 6 million tons. Many of the roads in NYC have been paved with asphalt from Pitch Lake.

Most of Trinidad’s Northern Range comprises of limestone caves such as the Sea Caves at Las Cuervas Beach. Other places of interest include Dunstans Caves, located on the Asa Wright Nature Reserve that house an oilbird colony, and the Aripo Caves. The Gasparee Caves, which lie below the ground on the island of Gaspar Grande off of Trinidad’s northwest coast where pirates and smugglers once used to secure stolen treasures. These limestone caves feature a crystal clear pool that adds to the mystery of the caves.

For those interested in birding – Asa Wright Nature Center is a 720-acre conservatory; and the Pointe-a-Pierre Wild Fowl Trust, a nature conservatory dedicated to the breeding and reintroduction of various bird and waterfowl species to the wild.

The Trinidad Carnival is celebrated in February or March every year.

The ‘official’ two days signify the finale of the festival as revelers parade through the streets. The band launching begins in August where prospective revelers get to see samples of costumes that will be available for purchase, then there is a progressive increase in band launches and shows that culminate in February.

The most unusual attraction has to be the “Benson & Hedges Annual Raft About” where crowds of spectators and participants gather at a beach venue to set sail in a homemade raft. The event takes place during the July/August months to the sound of pumping music, a live band, dancers and a DJ. The fun loving crews set sail on the serene waters as they try to stay afloat for the longest. It is an open-air event for the public and tends to draw a young, robust crowd.

Turtle nestling on the East coast beaches has got to be one of the best attractions. It begins as the sunsets and together with a tour guide you can be up lose and personal to gigantic Leatherback Turtles as they make their way from the sea to the protected beaches where they find the perfect spot to lay their 50 or so eggs.

Tours are arranged prior to arrival and there is a short lecture given, before the guides take you down to the nesting area. Visitors are offered the chance to sponsor a turtle by a donation of money. You will then get to name your turtle and receive a certificate and be given tracking information on your turtle.

The Hilton Trinidad Conference Center, Lady Young Road, Port of Spain Tel: +868 624 3211 (hilton.com) Located in the heart of Port of Spain overlooking a breath-taking view of the Queens Park Savannah.

Cara Suites, Southern main Road, Claxton Bay Pointe-a-Pierre, Trinidad. Tel: +868 659 2272 carahotels.com Located in South Trinidad this newly renovated hotel offers a sea view with a private balcony. There are 108 air-conditioned rooms to choose from with a starting price of US$90 per night.

Crews Inn Hotel & Yachting Center, Pointe Gourde, Chaguaramas, Trinidad. Tel: +868 634 4384 crewsinn.com For a great hotel on the Westerly tip of the island complete with its own yachting facilities, this hotel offers peace of mind for sailing enthusiasts who moor here. It comprises of 46 rooms with private patio’s that overlook the harbor, a gym, beauty saloon souvenir shop restaurant, charters and pool facilities. The prices begin at US$110 for a deluxe room.

The Kapok Hotel, 16-18 Cotton Hill, St Clair, Trinidad. Tel: 622 5765
Located in the suburbs of the heart of the capital city, this local nine-floor hotel has inviting warmth to it. Enjoy its panoramic views from your room and the rooftop restaurant that specializes in Chinese cuisine. It is within walking distance to Ellerslie Plaza – an open-air mall and also hosts an arcade of shops on the ground floor for your shopping convenience.

The Hyatt Regency, is located #1 Wrightson Road, Port-of-Spain, Republic of Trinidad & Tobago, the telephone number is +1 868-623-2222. Hotel Hyatt Regency is a luxury hotel located on the island of Trinidad. It offers luxury rooms with beautiful waterfront and city views.

Apsara’s 868 623 7659 offers traditional East Indian cuisine set in an authentic setting reminiscent of India. Choose from their tandoori selections to their eastern desserts. Entertainment comes in the form of piped music as the traditionally dressed waiter staff serves your food.

Trotters 868 627 8768 Here you can enjoy a casual setting where kids are encouraged to come out with adults and have a good time. The menu consists of cheeseburgers, steaks and pizza along with a good selection of salads and pasta.

Valpark Chinese Restaurant 868 663 4540 Situated upstairs in the open-air mall this restaurant offers a warm ambience for dining. The menu is Cantonese cuisine with buffet Wednesdays, brunch Sundays and live entertainment Friday and Saturdays. Be sure to try their roast duck in plum sauce!

Generally prices do include the Value Added Tax of 15%, but it is always a good idea to check before buying.

For the best shopping bargains head straight to central Trinidad where you will find a place called Chaguanas (pronounced Chag-worn-nas) or to the capital city of Port of Spain. In both places you will find a bustling high street setting with pavement vendors ready to strike up a bargain with you. The malls offer air-conditioned comfort with the largest mall located in the south in Gulf City.

The local currency is the TT dollar (TTD) it is made up of 100 dollars.

Coins are in denominations of cents 25 cents, 10 cents, 5 cents and a one-cent

Banking hours are from Mon-Thurs 8am-2pm, (outside of malls) Friday 8am-2pm ; 3pm – 5pm. Banks do not open on Saturday. Banks within malls have extended opening hours.

Payphones are located mostly in heavy traffic areas with most accepting local phone-cards rather than coins.

The prefix to call from outside of Trinidad is + 868 + number 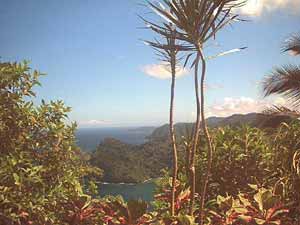 Other important things about Trinidad

TTD floats with the US Dollar. The exchange rate, as of September 2015, is approximately 6.35 TTD to 1 USD.