A Home Lost, Rebuilt, and Rediscovered in Southwest England 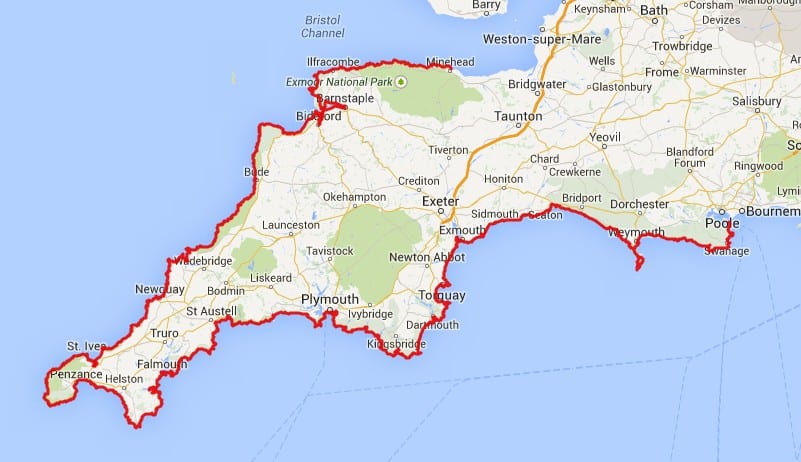 Their home and savings were gone while a terminal diagnosis threatened them, so Raynor Winn and her husband picked up their lives and went for a walk in England.

In August of 2013, Raynor Winn and her husband, Moth, set foot to walk the 630-mile South West Coast Path. The couple was in their early 50’s when they bought a tent and sleeping bags off of eBay and made their way around southwest England.

With them, they carried only £115 in cash and a bank card with which to draw out the £48 a week they were due in tax credits; in other words, they were broke.

Through a series of bad decisions and bad luck, they lost their farmhouse and their source of income (renting to travelers.) It was the home that their children had grown up in and to which they returned during their college breaks.

This uplifting tale of the couple who lost everything and embarked on their journey of salvation across the South West Coast Path has become an international bestseller.

begins in the dark interior underneath the stairs of a farmhouse and ends in the bright sunlight on a cliff above the sea. The opening and closing seem to be symbolic scenes of what this memoir is all about: coming out of the darkness and into the light, moving from hardships to bliss.

Raynor Winn and her husband, Moth bought a crumbling farm home in Wales and built it back up through their lifetime, sharing it with their children and eventually vacationers to make money.

This story starts the readers off in a tough situation: the couple has just lost their home only days after discovering that Moth is terminally ill.

“The Salt Path” proves the couple to be courageous and independent. In the first month of their travels, they struggle with pain, fatigue, hunger, sunburn, and the drenching rains that pour down on them.

This story sheds light on a topic that many don’t talk about which Raynor calls the “hidden homeless.” These communities of homeless people often find places to sleep in the forest or in abandoned buildings and barns.

The book is filled with gentle humor as the couple attempts to take on the trail together. Winn excels at description throughout her story while attempting to make the reader visualize her experience. It’s clear that the author has an appreciation for coastal ecologies and the surprising moments in the wild. Throughout, readers are immersed in a tiring and transformative adventure.

The long walk does what she had hoped: It gives them time to think, to plan, to find peace of mind.

Through every step and encounter along the way, their walk becomes a remarkable journey. The Salt Path is an honest and fulfilling true story of coming to terms with grief and the healing power of the natural world. The story follows the idea of home, and how it can be lost, rebuilt, and rediscovered in the most unexpected ways.

Excerpt from the book:

“There’s a sound to breaking waves when they’re close, a sound like nothing else. The background roar is unmistakable, overlaid by the swash of the landing wave and then the sucking noise of the backwash as it retreats.

It was dark, barely a speck of light, but even without seeing it I recognized the strength of the swash and knew it must be close. I tried to be logical. We’d camped well above the high-tide line; the beach shelved away below us and beyond that was the water level: it couldn’t reach us; we were fine.

I put my head back on the rolled-up jumper and thought about sleep. No, we weren’t fine, we were far from fine.

The swash and suck weren’t coming from below, it was right outside. Scrambling through the green-black light in the tent, I tore open the flaps. Moonlight cut across the cliff tops leaving the beach in complete darkness but lit the waves as they broke into a mess of foam, the swash already running over the sand shelf ending only a meter from the tent. I shook the sleeping bag next to me.

Throwing everything that was heavy into our rucksacks, shoving feet into boots, we pulled out the steel pegs and picked the tent up whole, still erected with our sleeping bags and clothes inside, the groundsheet sagging down to the sand. We scuttled across the beach like a giant green crab, to what had the night before been a small trickle of fresh water running towards the sea, but was now a meter-deep channel of seawater running towards the cliff.

‘I can’t hold it high enough. It’s going to soak the sleeping bags.’

The South West Coast Path: We ran back to where we started from. As the backwash headed out I could see the channel flattened to a wide stretch of water only a foot deep. We ran back down the beach, the swash landing far above the shelf and rushing over the sand towards us.

‘Wait for the backwash then run to the other side of the channel and up the beach.’

I was in awe. This man, who only two months earlier had struggled to put on his coat without help, was standing on a beach in his underpants holding an erected tent above his head with a rucksack on his back, saying “Run.”

We splashed through the water with the tent held high and climbed desperately up the beach as the swash pushed at our heels and the backwash tried to draw us out to sea. Stumbling through the soft sand, our boots brimming with salt water, we dropped the tent down at the foot of the cliff.

‘You know, I don’t think these cliffs are stable. We should move further along the beach.’

What? How could he be so careful at three in the morning? ‘No.’

We’d walked 243 miles, slept wild for thirty-six nights, eating dried rations for most of that time. The South West Coast Path guidebook stated that we would reach this point in eighteen days, and directed us towards delicious food and places to stay with soft beds and hot water. The timescale and comforts were all out of our reach, but I didn’t care.

Moth ran up the beach in the moonlight in a ripped pair of underpants that he’d been wearing for five days straight, holding a fully erected tent above his head. It was a miracle. It was as good as it gets. The light started to break over Portheras Cove as we packed our rucksacks and made tea. Another day ahead. Just another day walking. Only 387 miles to go.”

Buy this book on Amazon The Salt Path