From the dunes of Merzouga to Essaouira, Moroccos’ expansive deserts are cherished for their picturesque beauty, along with their limitless potential for off-roading events.

These sorts of outings have largely been dominated by men, making the Rallye Aïcha des Gazelles Du Maroc, THE international off-road rally race exclusively for women.

This upcoming 2020 will be the event’s 30th anniversary, with an impressive resume of an associated non-profit, past and active policies within and without the event, and the follow through on its messages of sustainability and realistically providing agency and ongoing resources for the Moroccan people.

Waaaaay back in in the late ’80s, Dominique Serra was working for MEDEF, France’s largest employer association. She was charged with the job of empowering the under-represented voices of women in the automotive industry, a daunting task in and of itself.

Thus, the first Rallye de Aïcha des Gazelles was born in 1990, made-up of nine French teams of two. Today on average, 320 Gazelles attend the event each year hailing from 17 different countries and ranging in age from 18 (the minimal entry requirement) to 71.

The goal of the adventurer is to get from point A to point B as quickly and as smart(ly?) as possible. As quoted by The Guardian, Serra states, “I wanted to make an intelligent rally, rather than an adrenaline rally; something that went beyond just putting your foot to the accelerator and advancing along in a straight line.”

On each day of the nine-day off-road competition in the Western Sahara Desert competitors rise from their make-shift accommodations at the early hour of 5 am to receive a “Road Book”; a document containing geographic headings of the days’ checkpoints.

Each vehicle is tripped out with a satellite tracking system so advanced it can provide minute by minute tracking (very useful when contestants are driving a little too close to the Algerian border, one of the only times trackers will reach out to vehicles and let them know to “check their location”.)

Armed only with a compass, the daily checkpoints, a map, and a navigational plotter teams choose their own path. The goal; drive the shortest distance.

Geological obstructions can be gone through or around (yes, there are mountains in the desert). By the end of the nine days, the winning team will be the ones that hit the most checkpoints driving the least amount of Kilometers.

This highly organized and professionally executed event does a beautiful job of balancing its competitive edge with its core values of environmentalism and giving back to the community. There are six legs of the competition, including two marathon stints that run two days each. The average stint is 50 to 180 Kilometers with the marathon stints running 290 kilometers.

The “responsible rally” aspect is immediately apparent, partly through the choice of vehicle. Contestants have the option of competing in the truck class, motorbike class, crossover hybrid class or the E-Gazelle class, the electric vehicle. Serra hopes the event will be completely electric one day.

Until then, she’ll have to settle for the races other environmental accomplishments, one such hurdle being the first automotive competition to receive the International Environmental Certification with the ISO 14001 standard in 2010. Just a few of these standards are evident in the basecamp accommodations where competitors spend their free time.

Food waste is donated to local farmers for animal feed and plastic water bottles are used in the creation of new buildings for the surrounding towns.

The non-profit Coeur de gazelles (directly translating to Heart of the Gazelles) associated with Rallye de Aïcha des Gazelles ensures that the above-mentioned efforts are carried out with respect and intention. Over 25,000 empty bottles are taken from the race and filled with sand, creating building blocks for structures.

Not usually the go-to for building materials, these bottles are easy to work with and cut down ten-fold on costs and energies for manufacturing a building material. No water required that would have been necessary for brick making and no energy needed for brick firing, with the added benefit of taking between 100 and 1000 years to decompose.

Solely from the use of these bottles, plus cement, rubble, and wire, Coeur de gazelles has been able to create a women’s handicraft center located in Tisserdimine and a nursery in Takoujht housing 17 children since its establishment in 2001.

The medical services set up for competitors during the event are the same that have been utilized to serve more than 8,000 Moroccans since 2005.

The Moroccan government has invested millions of dirhams (the local currency) into improving the health conditions of the population, though access to rural populations still proves difficult.

With the creation of the medical caravan in 2018 alone  “ 8,400 medical procedures were performed, including 3,646 medical consultations.”

These and many more services are undertaken by the Coeur de gazelles and can be accessed in greater detail on their website, www.coeurdegazelles.org.

The respect and appreciation between host country and organization is clear, especially since the road rally is the only of its kind to be awarded the Order of Ouissam Alaouite (equivalent to America’s Legion of Merit), given in 2013 by Morocco’s King Mohammad VI.

His majesty’s ongoing appreciation is evident in his dedication to keeping up with the yearly rally as well as his blessing of the use of the country’s Royal Coat of Arms, embroidered on the top left corner of each attendants uniform vest.

If it hasn’t sunk in yet the Rallye Aïcha des Gazelles Du Maroc is so much more than just another road race. As it is so beautifully put on their racing website www.rallyeaichadesgazelles.com; “The values that we believe in, the values you will be struggling to uphold every day, are real.”

They are not just a marketing ploy providing advertising opportunities. They are the human reference for the Rallye, necessary for its success. “They allow us to remain focused and bring together women who are similar to ourselves.”

Despite what country or continent that is from. Housed under the title, Once a Gazelle, Always a Gazelle the website also highlights the experiences of past participants, where they’re from, what they do and their professions (if applicable). The scope of lives this event brings in is no joke.

One woman, a nail stylist with three children and two grandchildren hailing from Switzerland commented; “A sensation . . . of freedom, of living, of existing for myself and not through a Dad, a brother or a husband, finding fulfillment, exploring my personality, discovering my abilities.”

Another woman from Japan stated; “I had a dream from my childhood to go to the desert rally. I am grateful to the Gazelles rally that gave me that dream. This experience is my life’s treasure.” 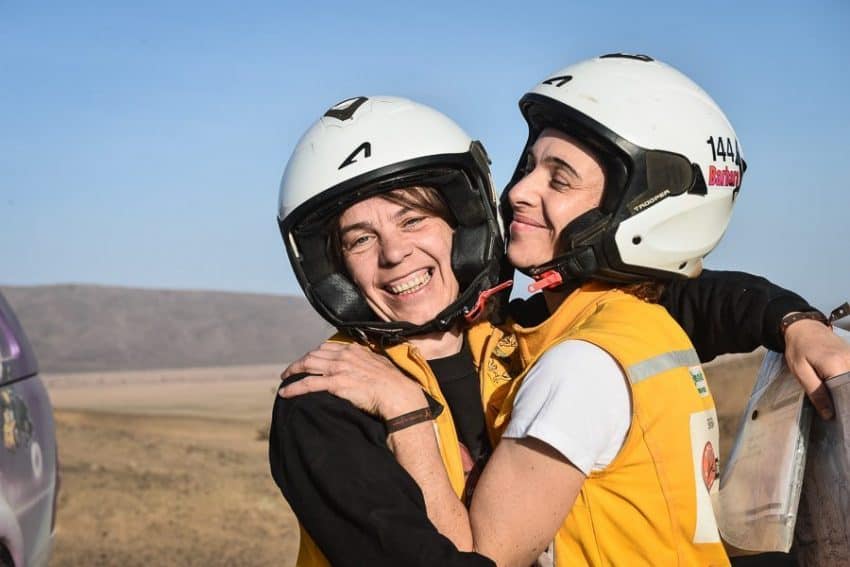 This event has become so popular over the decades that in November of 2017 the Annual Gazelles and Men Rally was created for mixed-gender or all male teams. Many returning Gazelles carry out these races with their partners.

The application process for both races for the years 0f 2020 ended February 1st but hey, there’s always next year. That leaves plenty of time to figure out where to get the $18,000 entry fee, plus the multiple vehicle upgrades for maximum off-road driving potential.