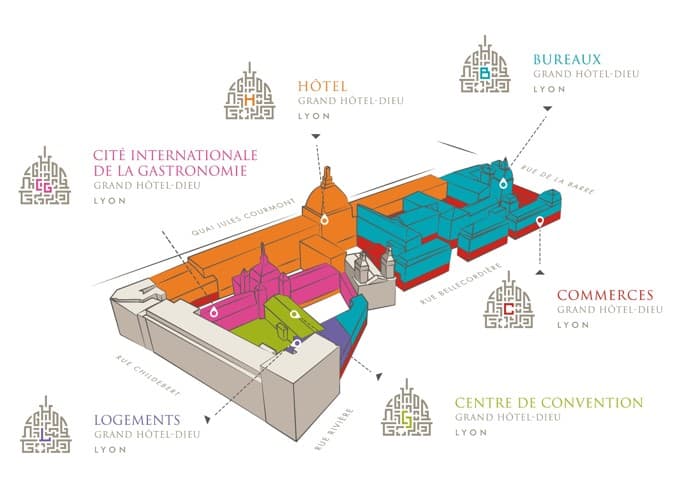 France is famous the world over for its history, arts and especially, for its food.  In 2019, three new museums are opening that will enhance any visitor’s experience in the most-visited country on Earth.

The first thought that comes to most minds when considering France is; food. High quality, well-made meals fashioned with intention.

Located in Lyon in the Grand Hotel-Dieu, the site will contain various exhibitions presented as pedagogical and interactive “courses of taste”, cultural events and demonstrations.  The museum will open in fall, 2019.

Régis Marcon is the owner of the restaurant Regis et Jacques Marcon in Saint-Bonnet-le-Froid in the Haut-Loire. Since 2005, his establishment has been awarded three stars by none other than Guide Michelin, the oldest European hotel and restaurant reference guide.

His expertise and guidance will ensure the International City of Gastronomy is up to the highest standard of authenticity.

Permanent exhibitions include the history of food in the world and links between food and health. The passing down of culinary traditions will be front and center.

To understand this, one must first understand what gastronomic means; the art, style, and science of cooking. That is to say, the ingredients and where they come from, with what intention the food is prepared, what the occasion is are all important components.

How it is presented and the setup of the meals are added components; How many courses are there? How is the table set up? Even the pairing of wine to the meal. All is relative, all is done with intent.

Gastronomy is the ultimate holistic perspective on eating. And in 2010 the meal of the French and the gastronomy behind it was added to the UNESCO (the United Nations Educational, Scientific and Cultural Organization [based in Paris]) Representative List of the Intangible Cultural Heritage of Humanity.

Since its conception, the opening date of the site has been bumped back two years (doesn’t everything always take longer than you think it will?) but should be open in the fall of this year, 2019. This makes sense, as the other facilities in the building needed to be established first.

Located on the banks of the Rhone, from 1184 onwards, this mammoth building used to be a hospital till its shut down in 2010. In April 2018 the facilities were once again open to the public, this time as a five-star hotel of 143 rooms as well as a wide variety of upscale restaurants and shops.

France’s heritage and food culture director Pierre Sanner has been quoted comparing the final product to Eataly in NYC; “ – in one location Italian restaurants, delicatessen stores, workshops, a bookstore, and cuisine lessons –“. Really, no one will have any real need to leave the building!

The ICG will be housed in the oldest and largest section of the building, allowing for the convenient three piece set up of this ideal space; the immersive museum, a temporary exhibition area, and an area where visitors can converse on food and health.

For the history buffs out there, The Commonwealth War Graves Commission is establishing opening tours of its facilities just south of Arras to the public. For years private VIP tours have taken place.

“As any visitor to one of our beautifully kept cemeteries will see, the artisan skills of our team are extraordinary, and the attention to detail, the scale of what we do . . . will make a real addition to any visit to the Western Front.”

Some duties of the commission that will be witnessed by visitors will include the Headstone Production Team carving headstones with the most up-to-date, as well as a realization of the centuries-long effort it takes to keep up some of the worlds most well-known monuments and memorials through demonstrations carried out by overly qualified stonemasons, carpenters, blacksmiths and horticulturists of the organization.

You might think much of the work of the CWWG is all tombstones and granite grinding. Interestingly, the institution also helps local authorities of France recover still hidden bodies of battles, centuries after the bloody wars they’re associated with have ended.

As stated by the inews.co.uk, “The CWGC operates in more than 23,000 locations in more than 150 countries and works to commemorate the lives of 1.7 million people who died in the two world wars.”  To show how vast their reach of influence goes, these countries span Africa, Asia, Australasia, Eastern Europe, and the Americas.

Because of the processes carried out by this organization, the names of the fallen will be dutifully preserved. This project was possible due to a LIBOR grant of 700,00 Euros, backed by the UK government. The project will be open to the public this Summer 2019.

The main part of this large museum is slated to open during the summer of 2019. The upcoming museum can attribute its existence to the generous real estate developer, Norbert Fradin who made a name for himself buying and renovating castles.

This isn’t Fradin’s first rodeo; he had previously opened a small sub-section of the Sea Marine Museum in the Citadel of Blaye. His passion and with-to are inspiring; “This world has been ignored for millennia and today we have this real awareness of how this world is inhabited.”

A series of Monet paintings encompassing the oceans were supposed to open before the grand opening of the permanent exhibits. Alas, when officials charged with ensuring the safety and longevity of the paintings viewed the space the paintings were to be kept, they deemed the facility unfit to house the priceless works of art and retracted the up-and-coming museums rights to use them.

Fortunately, another exhibit was found; Under the Sea, Beyond the Image by Natural Geographic. This exhibition features pieces from renowned wildlife photographers David Doubilet and Paul Nicklen.

The exhibit is the only section of the museum that has been open to the public since the summer of 2018. Their images are crisp and clear, beautifully honing in on what our expansive oceans have to offer while simultaneously setting up one of the key point of preservation the MMM is trying to project.

Through more than 10,000 objects, including works of art, seamen tools, artifacts, and boat models from throughout the ages, Fradin attempts to display clear and deep connections between man and sea.

This paired with a scientific view of the functioning of our oceans (it’s tied to food, energy, biodiversity) creates a thorough explanation of the big blue that makes up a little over seventy percent of our Earth’s surface.

Of course,  Fradin didn’t do it alone. Historians, oceanographers, and contemporary artists were there every step of the way, ensuring the safety of said artifacts, quality of the information provided, and seamless blend between the analytical and the emotional in this much-anticipated museum.