I first went to Sjusjøen in Norway to learn classic loipe (track) skiing, with a view to eventually going on off-track hut-to-hut tours, and I was immediately smitten by both the sport and the country.

The basic technique of traditional cross-country skiing is so close to walking that if you can be trusted to put one foot in front of the other, even the most confirmed snow novice will be tramping happily along whispering trails in a relatively short space of time.

And although loipe trails are man-made, they can cover hundreds of kilometers, offering everything from tranquil meandering through woods and picturesque villages to days spent in remote and beautiful but uncompromising mountain landscapes.

Getting to and from these more rugged areas calls for some additional techniques to be learned as well as a modicum of fitness and determination but, while cross-country skiing can be a rigorous and demanding activity in challenging conditions, it is nevertheless open to all comers.

All Types of People on the Loipe

In Norway, one crosses loipe in all types of weather with all types of people, ranging from gaggles of excited children out on a school trip to small groups of two or three pensioners to those clad in lycra doing serious training.

I have skied with people in their 60’s and even 70’s, covering the same routes and enjoying, or enduring, the same weather as equals.

After my first trip I had vowed to go back but ‘events, dear boy, events’ intervened. I did manage to go downhill skiing a few times in those fifteen years and while I enjoyed it I still hankered for the modest egalitarianism of cross-country over the rather frenetic and competitive Alpine scene.

So in spite of some worries about fitness and technique, I stopped prevaricating and booked another trip to Norway.

Høvringen, gateway to the Rondane Mountains

My destination this time was Høvringen, some 300km north-west of Oslo and one of the gateways to Norway’s oldest national park, the Rondane National Park. The park was established in 1962 and extended in 2003 to almost double its original size so that it now covers 963 square kilometers of mountains, fells, ravines, and valleys, with ten peaks above 2,000 meters.

One of the driving forces behind its creation was the protection of rare herds of wild reindeer and their habitat. As well as reindeer, the park is home to a variety of wildlife, including wolverine, musk ox, elk, roe deer, a small number of bears, and, perhaps, the occasional wolf.

Mountain birch and pine trees grow in the valleys and cling to the lower slopes of the mountains, while above the tree line lichens and heather predominate.

Recreation in the Rondane Mountains was also a consideration when the park was founded and today it is a popular year-round destination for outdoor pursuits, with a reputation for langlauf that draws not only Norwegians but also aficionados from Germany, Denmark, Britain and even neighboring Sweden.

Høvringen is a village consisting of a number of hotels, chalets, and cabins, almost all built of wood in traditional Norwegian style. The hotel I stayed in, the Øigardseter, had simple but comfortable en-suite rooms, separate-sex saunas, a fitness room, tv room, and spacious, quiet lounge areas with, to use a pre-digital camera phrase, picture-postcard views.

The owners were hospitable and helpful, and the gentle, unselfconscious pride they and their team took in ensuring that guests were warm, happy, and well-fed was truly delightful. Food was wholesome and plentiful, which is vital for re-fuelling tired bodies that have been active in the fresh air all day.

The varied hot and cold breakfast buffet doubled as a packed-lunch construction kit since lunch is usually eaten either in mountain huts or at some sheltered outdoor spot along the day’s route.

On only one occasion did we return to the hotel for the lunchtime buffet. This was so good that a number of people in my group ate themselves to the point at which the only sensible thing to do with the rest of the day was loaf around and remember that we were, after all, on holiday.

Dinner was a served three-course meal of simple but tasty food. On the last evening, we ate reindeer, moist and flavorsome meat served with a cloudberry sauce.

The village is somewhat straggling and, at least in winter, Høvringen has no discernible center or high street. Nor is there any conspicuous consuming to be done.

The only shop in the village is of the if-you-can’t-find-it-here-it-isn’t-worth-having sort, and although they may exist I didn’t see a single restaurant or bar.

Apres-ski does not rank high on the cross-country skier’s agenda unless you count chatting over a glass of wine or beer in the hotel before heading off to bed at about 9:00 pm as apres-ski. But if you’ve ever been out loping along loipe all day you’ll agree that this definition is quite sufficient.

The first few days of my trip were bright, cold and windless, and so provided perfect conditions for regaining ski legs.

Although the basics can be picked up quickly enough, there are a number of other techniques to learn which help with energy-efficiency on the flats and make hills safe to negotiate, in both directions.

During these early days, we saw beautiful displays of lenticular clouds forming in the east.

Close to Høvringen, there are around 100km of extremely well-marked loipe crisscrossing the mountains and valleys on which to practice these various maneuvres. An important element in choosing a route is the inclusion of at least one stop in a seter.

A seter is traditionally a small mountain farm used during the summer when livestock are taken to graze in the high pastures. Seter are usually owned by a larger farm further down the valley and are simple affairs, often only a wooden cottage for the farmer and a barn for the livestock.

In the Rondane mountains a number of seter have been turned into mountain huts and cafes, often with additional cabins and camping close by. Dovreyhytta, Hovdehytta, Putten seter, Smuksjøseter and Peer-Gynt-Hütte all serve hot drinks and food, popular choices with cold and tired skiers being mugs of hot chocolate and plates of waffles served with sour cream and syltetøy (jam).

Most of the routes I skied took in one or more of these huts at some point in the day but the variety of loipe available meant that repetition was never a problem, even though we only skied in the vicinity of Høvringen and did not venture south-west towards Mysuseter or up towards the hut at Rondvassbu behind the high mountains in the west.

Routes south from Høvringen to Putten seter skirted Anaripiggen (1211m) and Karihaugen (1277m) while to the west lay Smuksjøseter, a small cluster of wooden buildings overlooking a lake, which is of course entirely frozen over in winter.

One day, to save some time, and effort, as well as for the sheer fun of it, we took the hotel snowcat, or ‘weasel’, up towards Smuksjøseter before jumping off to head yet further west to remote Peer-Gynt-Hütte on a route which offered stunning views of Brakdålsbelgen (1915m) and Smiukampen (1799m).

This tiny, two-room hut stood lonely and windswept and was a welcome refuge for the skiers who crowded its narrow benches. A shovel stood sentry by the door to the eco latrine block, for with the snow piled high it could not be opened more than a few inches. Being a gentleman, I cleared the way for those who followed but woe to any needing this facility in a hurry on a cold, windy, dark Norwegian night.

By now the lenticular clouds had given way to a dark smudge over the eastern horizon and a hard wind drove the snow in undulating ribbons across the packed base.

One day, a dramatic rise in temperature meant soft, wet snow. Skiing east to Dovrehytta, we returned via a tough uphill pull made worse by learning the hard way about one of the technical mysteries of cross-country skiing – wax.

I discovered that I had no traction on the snow and had to resort to an exhausting and undignified herring-bone waddle up a long, slippery incline. I had made the error of hastily applying cold weather wax when the snow was warm and wet. Happily, it soon became markedly cooler on the higher fells.

At last, the weather began to break and a gusty wind brought snow whirling into the late afternoon and evening. The following morning, the morning of my last day in the mountains, broke fine and cold, revealing a welcome covering of fresh snow.

We skied from Putten seter to Smuksjøseter on a route which led up and across bleak fells between Haukberget (1198m), Skoratberget (1298m) and Baksidevassberget (1327m). A relentless easterly wind had arisen which scoured the loose new snow from the compacted base, blasting furious, skidding flurries across the plateau.

In many places the loipe had been completely filled, making the long downhill to Smuksjøseter especially difficult. Given the severity of the wind and cold most of the party opted for the weasel back to Høvringen, leaving three to savor a few last hours of hard grind back over the Troll loipe.

I’m glad I skied this final afternoon because, despite the shopkeeper’s curt dismissal, “Ulv? Nei!” [wolf? no!] I still wonder whether we saw a wolf on the way back.

How else to explain a large canine in the distance which took one look at us before turning and running faster across snow than any domestic dog I can think of to reach the safety of the next valley?

The hostess at my hotel said people do sometimes think they’ve seen a wolf, but whatever it was (a stray dog seems most likely, but all the way up there, with little in the way of scavenging?) I’m reading it as a sign that I should not wait another fifteen years to get back into the wild Norwegian mountains.

Information on The Rondane National Park can be found at visitnorway.com

Details on the Øigardseter hotel are available at: oigardseter.no (an icon provides an English translation).

Putten seter and Smuksjoster also offer accommodation, details of which can be found at puttenseter.no and smuksjoseter.no 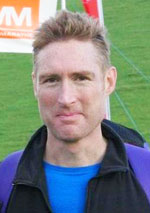 Simon Glassock, shown here at the end of Britain’s Original Mountain Marathon, had a varied career before deciding to read History at Oxford, and he is now an MRI radiographer with an active interest in travel, outdoor pursuits and writing.