Taking a Year Off, Risk and Rewards 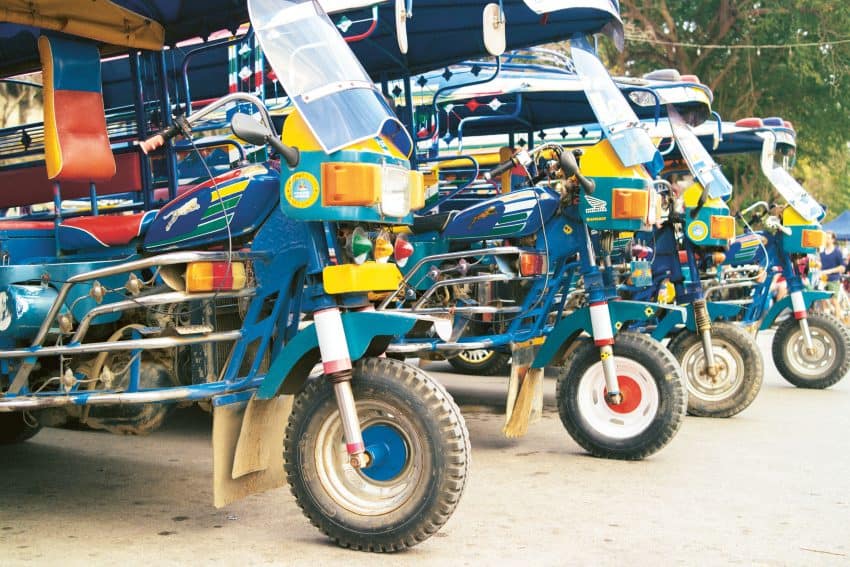 Taking a Risk for the Best Times of Their Lives: A Year Off

Year Off is one part travel guide, one part travel essays and photos, and one part memoir documenting the story of Alexandra and David Brown, a couple who decided to take a year off from their jobs and ‘regular lives’ to travel the world together after only knowing each other for a few months.

This inspiring book is for all the dreamers, would-be adventurers and endearingly practical professionals looking to scratch the travel itch and take a risk on what may be the best time of their lives.  A Year Off: A story about traveling the world – and how to make it happen for you

With many gorgeous photographs and actionable travel advice, A Year Off captures all the beauty and magic of the wanderlust spirit, guiding readers on how to take the same leap and showing them just how doable a journey this type of round-the-world travel is.

Excerpt from the Book: Driving the Loop in Chiang Mai, Thailand

It was almost seven in the morning, and Alexandra was sleeping peacefully next to me.

The sun was creating sharp, bright lines across the room as it angled through the old wooden shutters. The air was warm and smelled like dry wood, tuk-tuk exhaust, and fresh-cut fruits. Our little corner was beginning to bustle, and the energy felt kinetic. Chiang Mai was waking up.

I heard Tony chatting downstairs as he took orders and Mae rattling pans as she prepared breakfast. I didn’t want to wake Alexandra, but given that she sleeps like a retired spy, I knew my efforts at not waking her were 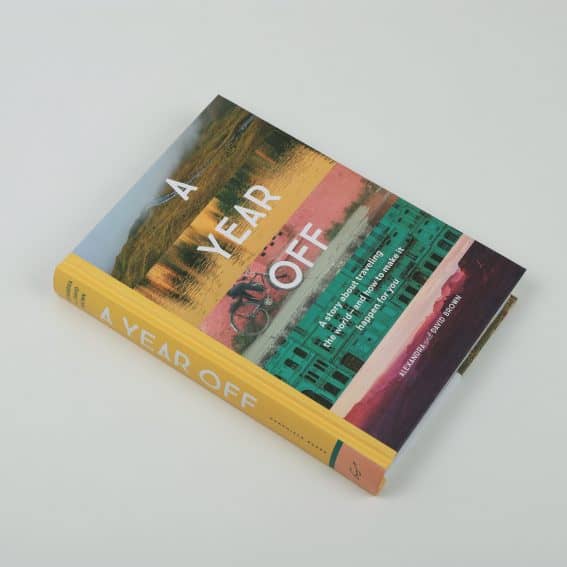 likely to be futile.

Trying my best to be silent, I slowly walked across the room and opened the rickety old door leading to a narrow balcony.

“Where are you going?” Alexandra sprang forward before her eyes were even all the way open.

“Just to the balcony,” I replied as I looked back to see her relaxing her muscles and getting comfy again.

“We have a big day today. Are you excited?” she asked, to which I replied, “I really am.”

After some time watching the traffic pass and attempting to follow the tangle of wiring linking the buildings around me, I wandered downstairs. We had been staying in this old traditional Thai building for about a week, but it already felt like home.

Tony greeted me, giving me a look that explained what he was about to say, and I replied before he found his words. “Yeah . . . granola would be awesome, thank you.” I sat down and waved to Mae, who was cooking just a few feet from my seat.

Several minutes later, Alexandra joined me and noted how unusual it was to have me downstairs first. I felt an unfamiliar mix of excitement and peace and wanted to tell her about it, but saying that would have made this simple feeling contradictory and complex. Instead, I simply said, “I cannot wait to get on the bike.”

Tony’s Big Bikes had been recommended by a good friend in San Francisco, as was the Mae Hong Son route we were about to embark on. From what I had learned, it was an endlessly windy and picturesque route through some of the most beautiful country in northern Thailand. I had been missing motorcycle riding immensely.

After breakfast, we strolled down the street to Mountain Coffee, the beloved coffee stand we had found on our second morning here. “What would you like today? Two cappuccinos?” asked our thoroughly eccentric and loveably rude coffee roaster and barista.

He was giving me a cockeyed mischievous look, which immediately made me smile. I replied with an enthusiastic, “Yes, please!” to which he exclaimed, “Oh, good, I love taking your money!”

His family grew the beans in the mountains about an hour’s drive north, and he roasted them here in the city using wood fire and a self-modified cement mixer. Beneath his multi-patterned garb and technicolor hat was a brilliant and curious man.

A few days earlier he had invited us to roast coffee with him, an invitation we had happily accepted. Like himself, his operation felt completely self-made and totally unique. Alexandra and I had been quite taken by his eccentric and lovable personality and were impressed with the life he had carved out for himself.

Chatting a bit about our upcoming adventure, he continued in his morning patter and asked, “So I won’t be able to take your money over the next few days then?” He slid our coffees across the counter to us. I shook my head, then looked down to notice he had drawn a lady with large bare breasts in the foam of my coffee and a cowboy in Alexandra’s.

“Safe travels. Come back so I can take more of your money,” he said with a look that revealed his genuinely soft and caring nature. We drank our coffees quickly and as we waved goodbye, Alexandra said, “Don’t miss us too much! We won’t be gone long.”

We strolled back down the lane to our guesthouse, where we packed up our bags and tidied up the room. I got great satisfaction from our ability to pack and unpack quickly. Beyond the gratification of being organized and tidy, our minimal packs felt symbolic of how we valued our time.

Our time belonged to us, belonged to living and experiencing what life had to offer us that day; it didn’t belong to my stuff. Within thirty minutes of leaving the coffee shop, Alexandra and I were in a tuk-tuk on our way to a new adventure.

The Stable of Motorcycles

I had begun mentally riding motorcycles around the age of three. Utilizing my index and middle fingers as wheels, my stable of motorcycles was always with me. Up and down the banisters, over kitchen counters, and even some off-roading on the wide-wale corduroy of our couch—I could ride anywhere.

Inside my little-boy imagination, the bike was more real than real, and to me, my tiny voice sounded like the roar of a finely tuned engine. Heeding the pleas of all who loved me, I ignored the voice inside until I couldn’t.

Twenty-two years later, I quit a job I hated and spent every penny of my savings on a stunning red 1974 BMW R90/6. This move symbolized the start of my pursuing the things I loved, even if this choice and further ones were seen as less than smart by people in my life.

About four hours later, Alexandra and I were fulfilling a near-lifelong dream of mine. We were exploring the glorious unknown on a perfectly running and maintained motorcycle, ripping around roads that were smooth and never straight. The only difference between dream and reality was I was not alone on this adventure.

I had Alexandra there with me, fearlessly leaning deeper and deeper into the turns as we adjusted to riding together and our surroundings. It had not been part of my plan, but as was the case with nearly every truly incredible thing, it never could have been. I had hoped to feel this way someday in my life but hadn’t expected it.

The feeling was far from needed, but I would have given all I had to keep it if it was threatened. At that moment, I could without a doubt say all the bullshit life brings was worth it, that I had no regrets and a partner in the realest sense of the word.

It was a glorious mix of presence, life, and love. 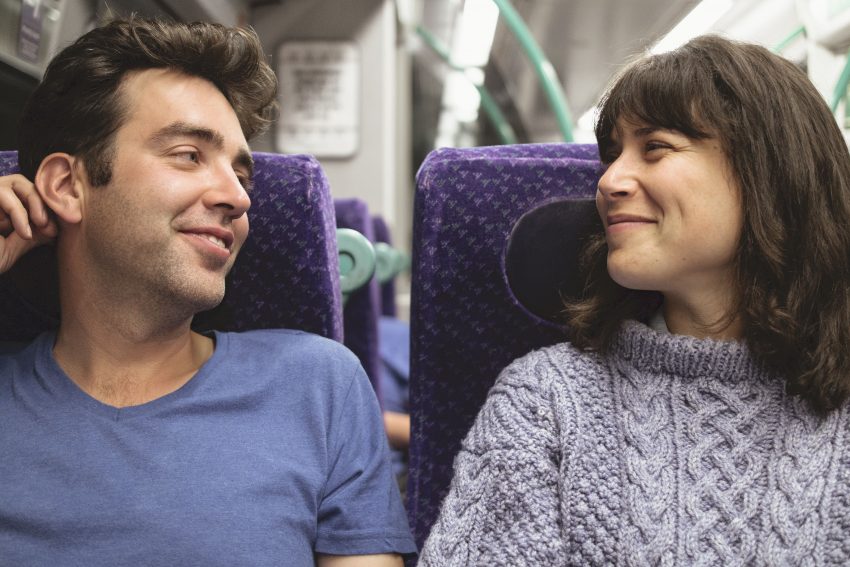 Alexandra Brown is an author and marketing strategist. She attended the Medill School of Journalism in Evanston, Ill., and works in advertising with a focus on digital and content strategy. She has written about her family in the essay collection My Parents Were Awesome and food, wine, travel and philanthropy for Nopalize.com, The Bearings Guide, Whetstone Magazine and The Rotarian. She lives in Portland, Ore., with her husband and their daughter.

David Brown is an enthusiastic project collector and a business strategist. He attended the Katz School of Business at the University of Pittsburgh and also studied anthropology, philosophy, and African studies. He currently works in brand management with a specialty in consumer packaged goods. He also lives in Portland, Ore.

A Year Off: A story about traveling the world – and how to make it happen for you