Panama: Climbing a Volcano With Views of Two Oceans

Panama: Climbing a Volcano With Views of Two Oceans

The taxi driver drops us off in the dark forest at two o’clock in the morning. He promises that somebody will come around to pick us up later in the afternoon. I find the trailhead with the help of a flashlight, and we begin clomping uphill over rocks and ruts. The shine of a full moon illuminates part of the path through rare breaks in the bush.

My wife, Mare, and I hope to reach the top of Panama’s lone volcano, Volcan Baru. The lure of a possible view of both the Caribbean Sea and Pacific Ocean motivates us to keep our legs pumping.

We climb over boulders and slide across ice covered puddles while the cold wind whips around us. The best chance to see both bodies of water at the same time comes at sunrise, around six o’clock in the morning. We maintain a fast pace, since we only have about four hours to climb 8.5 miles.

Smack in the middle of Panama’s Volcano Baru National Park, this 11,000 foot (3478m) behemoth boasts seven separate craters. The surrounding 35,000 acre park in the Chiriqui Province hosts a full range of geological and ecological history. Of course, all we can see is the rough trail at the end of our flashlight’s beam.

“Do I hear wolves?” Mare asks.

“Nah, that’s just the wind.” I pick up a stick and pretend to use it for a hiking pole. Both of us have hiking experience, from five-day treks through knee-deep mud in the Guatemalan jungle, to the Grand Canyon North to South Rim in one day… and I take issue with the guidebook author, who makes this hike sound like a walk in the park.

I remember a travel writer who once boasted about never leaving her recliner.

Hard to believe that just yesterday we had sweltered in the desert heat in David, Panama’s second largest city. Taking the bus up to the mountain village of Boquete brings cool relief in only forty-five minutes.

This small town filled with friendly folks serves as a comfortable hub for a range of activities, such as hiking, hot springs, white water rafting and kayaking. Do it on your own, or with a guide.
A significant community of expats enjoys mellow Boquete, named after the daily drizzle. Each afternoon, clouds and mist engulf the artesian shops and multi-cultural influences. A local man tells us that most Panamanians represent a mixture of worldly cultures.

About three miles from the top of this well-marked, rugged trail, we see flash lights bouncing down through the trees in the darkness. Three Scandinavian hikers approach.

“My knee blew out,” a tall, blonde woman says. “And we were so close.”

Her two friends help her slowly descend the trail. They had left for the hike at midnight. I now wish that we had left that early as well.

The sun starts to rise and we are about one-half mile from the crest. Mare double-times her pace up the steepest part of the trail. How does she do it? I lag behind with my choppy, painful steps and cheer her from a distance.

Mare manages to catch a few photos of sunrise, over the cloudy Caribbean, and the multi-shaded lights of the Pacific. Clear days on both sides are rare and clouds already begin to shroud the peak of Volcan Baru.

We munch on peanut butter and jelly sandwiches atop the mountain, sitting next to a satellite dish and a shrine to “Our Lady of Guadalupe.” A Conejos pintado (raccoon-like creature) saunters past us and disappears over a sheer cliff. Pumas, tapirs, and over 250 bird species roam around this huge park, while we stand amongst the clouds and rain, thinking about descending Panama’s highest point.

What goes up must come down

Oh no, that overused cliché of “What goes up must come down” takes on a new meaning in the form of exhaustion, knee and muscle pain. The trail looks steeper in the light of day, so perhaps it was good that we could not see much of it on the way up.

Finally, we reach the Ranger station at the trail head. We pay a ten dollar entrance fee, (Panama’s currency is U.S. dollars) since the station was abandoned at two o’clock this morning. The Ranger calls a taxi for us. The only catch being that we have to walk three more miles to the closest paved road.

While we wait at the first paved intersection, we lie under a tree and rest on our backs, basking in a feeling of accomplishment.

About one-half hour later, a pickup truck drives past, hauling a harvest of coffee beans. From my prone position, I lift up my thumb and the driver stops. He gives us a lift and introduces himself as Juan. He explains how the coffee crop is damaged this year from excessive wind and rain. Most of the fine coffee is exported, leaving discarded beans for the locals.

Juan drops us off about one mile from Boquete, at the top of a hill. We limp down the slope to town and figure that the total trek adds up to about 20 miles.

What a relief to reach Hostal Boquete, where cold beers in the fridge cost one dollar each. Soon we feast on fresh, local trout and plot tomorrow’s trip to the Caribbean islands of Bocos del Toro.

From Starfish to Whipping Devils

Sipping a cool drink on a terrace overlooking the Caribbean… now we have a view. The main island of Bocas del Toro awakens early and goes to bed late. We splurge on a room with a balcony sea view for $65. Water taxis maneuver to surrounding islands, and there is no shortage of boats to hire for day-trippers such as us.

The sand on Starfish Beach cuts into your feet like shards of glass. Some say it’s because of the countless, colorful starfish that make this their home.

We snorkel in the crystalline waters among multicolored anemones, cucumber fish with starfish wrapped around them, sea urchins, stingrays and fishes. Returning to the main island, we are treated to an unexpected festival which kicks-off Carnival.

Crowds gather along the streets. Red, black, and white costumed devils dance down the road and crack whips (sticks with ropes tied onto the end) at constant confronters. After some persuading, I get lucky and a man agrees to explain this festival to me.

He will not tell his name. Nobody is supposed to know the true identity of a costumed devil. He draws a lineage chart that diagrams the devils’ development. It starts with six years of training as a devil, marked by a totally black costume; then five more years of training in a red costume, followed by six years training in red and white.

Finally, the highest level devil is marked by a white costume. All devils have a small head attached to the leg of their pants. If a confronter steals the head, then the devil must remove his mask, get whipped, and go home.

The festival starts around February 16th each year, and ends on Ash Wednesday. On that day, the devils go to church for communion and salvation. After church, they strip off their costume revealing their true identity. Then they run home, through a crowd of people who crack whips and reap revenge on the devils for all the punishment they had doled out for years.

After a three-hour, twisty mountain ride in a standing-room only bus, we sit alongside the Pan American Highway and catch a bigger bus to the Horconcitos turn-off.

Then we hop into the back of a pick-up, which bounces down a dirt road to a water taxi, where we outboard across a small bay to Isla Boca Brava, in the Golfo de Chiriqui. Monkeys follow us on this small tropical island, while we hike around the bush. The one and only hotel/restaurant offers snorkel tours and comfortable lodging.

We meet Mitch, who lives on his sailboat in the bay for free. He visits the hotel restaurant often for internet access and gold trading. We are pleased to witness how a retirement dream of living on an island is possible. However, for now we have more mountains to climb.

We mainly travel on a budget and without reservations. Panama offers easy public transportation, an array of hotel ranges, and although it is always helpful to know some of the Spanish language, English is spoken in most metropolitan areas.

We found it much less expensive to fly to San Jose, Costa Rica and then take a bus into Panama, rather than fly to Panama City.

Here is a list of some hotels/hostels we enjoyed:

Isla Boco Brava: Restaurante y Cabinas Boco Brava: private room w/bath for $40 US. If no rooms available, hammocks will house you at this only hotel on the island.

Panama City: Difficult to find a room without reservations during Carnival. We found one at Hotel Las Huacas for $126 US. www.lashuacas.com 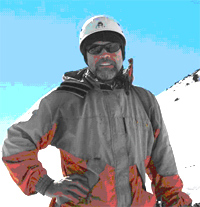 Ron Mitchell is a freelancer who loves to write and travel. He just completed his first novel. Visit his website.

Benin and Togo: The Birthplace of Voodoo