Malaysian Borneo: A Visit to the Garden of Eden

Borneo is far away and has something that few other islands can boast of — orangutans.

I opted to arrive in Borneo two days before the group with whom I was traveling; (Terra Incognita Ecotours) was to assemble at the Tanjung Aru Shangri-La Resort, just outside of town. I wanted to get a feel for the country from one of the bigger cities and photograph the people and places there before I left the civilized world and headed for the jungle.

Kota Kinabalu did not disappoint. I arrived late on a Saturday night with the intent of visiting the famous Sunday market on Gaya Street early the next day. By far, the produce market surpasses the “craft” booths where Jasmin, a well-intentioned local, with their “made in China” merchandise, escorted me. The fragrance of all the fresh fruits and vegetables was intoxicating, as well mesmerizing; laid out on colorful blankets for inspection.

I sampled Mangosteen, Lychee, and Dorian, tropical fruits whose fragrant sweet meats are encased in hard, prickly casings. Dorian, “the king of fruits” often repels the curious gourmand with a sickly smell, much like rotting onions or something in the toilet. The aroma is so powerful the fruit is banned in some public institutions like hospitals.

I have traveled many times thru the Amazon jungle, the shade free, lava strewn terrain of the Galapagos, and Tanzania in summer, but nothing prepared me for the stifling heat of Borneo. Within minutes of exiting the delicious, air conditioned lobby of my hotel I was drenched in sweat. Carrying a water bottle everywhere is not an option but a necessity, as heat prostration is always lurking around the next corner.

I had selected a hotel by the waterfront, Hotel Meridian, assuming it would offer the opportunity to photograph the early morning activity at the docks. Again, Kota Kinabalu did not disappoint. On Monday at 6 AM, I crossed the street in front of the hotel and found my way to where the activity appeared most frenetic. I was rewarded with a vista I will never forget.

In the golden sunlight, ancient, multi–colored, fishing boats with peeling paint were arriving by the minute, and bare chested fisherman were off loading net after net of unrecognizable sea creatures. Soon the docks were covered in fish being weighed and sold to restaurateurs and brokers. Discarded bright red, and very poisonous, I later found out, jelly fish covered whatever wood planking could be seen between the edible fare.

Acclimating to the smell, I slipped and slid my way from one end of the dock to another to capture the experience with my camera. I watched men on board ship coiling ropes, washing down at communal pumps, and swabbing decks.

Everyone was friendly, smiling, posing for photos and signaling the universal OK sign with thumb and first finger. Not wanting to miss a minute I staved off hunger with fried bananas on a stick, purchased from a local boy.

Eventually, I returned to the hotel for a quick breakfast and then back to the dock. Much like a stage play when the lights have gone down, the magic had left the waterfront with the purchased fish and all that was left was a littered dock, pungent with the aroma of discarded fish and garbage.

Again, Kota Kinabalu did not disappoint. The treatment rooms were all housed in separate buildings connected by stone pathways. A Zen like aura cloaked the buildings in sea breezes and sensual aromas. My room contained not only a massage table but also a queen-sized bed draped in gauze curtains for anyone having the time and/or money to indulge themselves beyond a mere one-hour massage. First, my legs and feet were washed and massaged in rose water while I drank lemongrass tea.

Then my body was kneaded and coaxed out of its myriad aches and pains; all remnants of the other world I had left behind. Healed spiritually and physically, I head for my room and shower to prepare to meet my traveling partners.

After sharing two meals together and getting acquainted, we headed out to explore Sabah and find orangutans. First stop: Mt. Kinabalu, the highest mountain in South East Asia, but an orangutan-free zone due to its altitude and cool temperatures. What we did find there, however, on our hike along its base was a wide assortment of pitcher plants and orchids. Shrouded in mist, the mountain is eerie yet beautiful, and I could not help but wonder what I might find had I the time to venture higher up to its summit.

Getting closer to our goal, we spent the night at the Sepilok Nature Resort, a stones’ throw from the Sepilok Orangutan Rehabilitation Center, where you can be almost assured of seeing orangs. The center comprises over 11,000 acres of virgin forest in the Kabili Forest of Northern, Malaysian Borneo.

This very large reserve, an iniative of the Sabah Wildlife Department, is dedicated to the rescue and rehabilitation of orangs, left orphaned, rescued from the pet trade, injured, or otherwise incapable of caring for themselves.

Here the animals are given medical treatment, socialized in the way their mother would have raised them, and taught to forage for their food so that they can be capable of returning, self sufficient, to the forest.

Twice a day, some of the 60-80 orangs living in and around Sepilok, visit the reserve for a supplemental feeding of fruit and milk. This is when tourists are invited to gather on viewing platforms and enjoy their antics. One is not guaranteed of seeing these primates, as when the trees in the forest are fruiting, orangs have no need for these feedings.

When they do come, you are guaranteed of a good show, as they are inveterate clowns. I watched an adult male squeeze watermelon juice gleefully down his face and neck all the while throwing punches at the juveniles trying to steal a lick. Be advised to get there early and wear a hat. Upwards of a 100 people may congregates in the broiling sun; it is best to secure a spot in the shade and just be patient.

While it is entertaining to see these orange creatures at Sepilok. nothing beats seeing them in their natural setting. Because I traveled with Terra Incognita Ecotours who has partnered with Red Ape Encounter, a local conservation group, we had the privilege of visiting their forest reserve on the lower Kinabatangan River where they are studying a select group of semi-wild orangutans.

We tracked Jennie and her daughter Molotus, accompanied by RAE researchers, until we finally found them high in the trees above our heads. Molotus, like all curious toddlers, stared brazenly down as us, while mom tossed branches at us reminding us to keep our distance. Only 300 people per year are permitted access to this reserve to avoid disturbing the primate so I felt most fortunate traveling with Ecotours, walking in the footsteps of National Geographic and Jack Hanna.

RAE has partnered, as well with KOCP, the Kinabatangan Orangutan Conservation Project located in Sukau. KOCP provides scientific and technical advice to RAE. In conjunction with RAE, we attended a lecture given by Dr. Mark Ancrenaz, scientific director of KOCP, at their offices in Sukau, 15 minutes by boat from the RAE research site.

Dr. Ancrenaz, a tall handsome Frenchman, who certainly kept my attention, explained that conservation is a long-term commitment, requiring many, many hours of research and field observation.

He told of recording over 3000 hours of field observation in 2009. It also requires partnering with the locals, he continued, making them custodians of their land, as well as gaining the trust and cooperation of the local government.

Up to now, much of the focus of conservation has been on rescuing and rehabilitating wild born and captured orangs or infants kept as pets. Moving ahead, the direction will be to maintain the animals in their natural environment, by preserving it and/or adapting the forest in a way that is workable to industry and suitable for orangutan sustenance.

To this end, a project is in the works that will connect the fragmented forested areas by means of planted corridors so that the animals can travel longer distances in safety. Dr.Ancrenaz stated,”most of the remaining patches of forest are highly degraded.” Where there is water, rope bridges are being constructed, as orangs do not swim.

Another plan, given government approval, will create 500-foot corridors from the riverbanks back to the palm oil plantations for animal migration. This, hopefully, will forestall further conflict between the apes and man.

As a journalist, I would be shirking my responsibility if I did not recount my last adventure, unpleasant, as it may have been. It involved being surrounded by the things of which nightmares are made.

It was an experience that affords me a good story; however, I will not do it again.
For those of you, who are true gourmands of Chinese food you will, I am sure, have indulged in bird’s nest soup. I have not, and after this foray into the Gomantung cave, never will.

The bird that creates this famous nest is called the swiftlet, and it is the saliva of this bird that is used to form the tiny nest. After all the eggs have hatched, professional “gatherers” climb to the topmost reaches of the cave on ridiculously tall rattan ladders and collect the nests. Two pounds of white swiflet nests goes for $4000 and the black for $1700.

During the collecting period, these men even sleep in this onerous place to repel invaders and guard their turf. A very tough looking band of tattooed Chinese gangsters stood guard outside the cave entrance, even hanging a noose to show they meant business.

There is big money to be made here. Dark, dank, and foul smelling, thousands of bats, crabs, cockroaches and rats populated the cave. No amount of hand sanitizer would have cleansed my hands had I touched anything; I was even afraid to breathe.

So go ahead, eat your delicacy, for me I’ll stick to lychees, mangosteen, and durian!!

Borneo is located on the Equator, north of Australia, on the South China Sea. I traveled to Borneo from the West Coast on Korean Air and found them to be cost effective and efficient.

In Borneo, I traveled with Terra Incognita Ecotours which also offers trips to Tanzania, Rwanda, The Pantanal, and New Zealand. I like the company philosophy of making donations to the conservation groups with whom they partner, as well as only patronizing local goods and services. 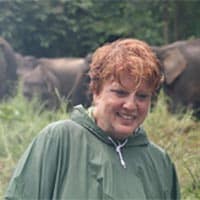 Originally a Fashion Photographer, Beth Abrahams joined an eco-adventure in 1998 to the Galapagos Islands that made her switch focus to Travel/Wildlife photography. She lives in Fairfield,Connecticut, and when not traveling, works as an Interior Designer.