A Thousand Miles of Water Trails Waiting to be Explored

>A group of kayakers take a break from paddling a four-mile loop of the Chincoteague National Wildlife Refuge in Virginia. Photo by Diana Conlon. 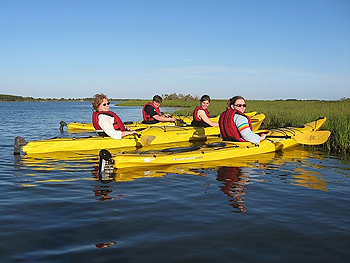 A Thousand Miles of Water Trails Waiting to be Explored

Most GoNOMAD readers share a passion for hiking and the outdoors. Many of us can share stories of times when being close to nature has filled us with wonder and joy. And that’s on dry ground. For a really close-up nature experience, following a trail over water is even more fun.

Many National Wildlife Refuges in the U.S. with rivers, lakes, marshes, and even swamps offer visitors guided tours and boat rentals.

Water trails are marked for the public as they paddle at their leisure while getting an up-close and personal view of nature. And don’t forget your binoculars and camera because there are lots of birds to be seen and wild creatures waiting for their close-up!

The U.S. Fish and Wildlife Service (FWS) is a bureau within the Department of the Interior and its job is to ensure the protection of fish, wildlife, plants and their habitats. The National Wildlife Refuge System, directed by the FWS, prides itself on being “the world’s premier system of public lands and waters set aside to conserve America’s fish, wildlife and plants.”

The work of FWS within national refuges includes protecting and recovering endangered species populations, according to FWS spokesperson Susan Morse. 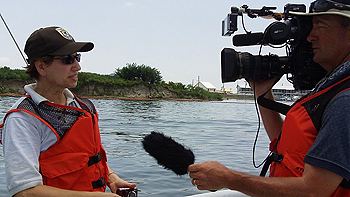 Today there are 553 National Wildlife Refuges and other units of the Refuge System, plus 38 wetland management districts.

Wildlife refuges continue to be established, whether by Congress or an order by the FWS Director, based on the need to protect natural resources. Today, there is a national wildlife refuge within an hour’s drive of most major cities in America. Yes, that includes Hawaii and Alaska.

One thousand miles of water trails are ready and waiting to be explored within the National Wildlife Refuge System. Of course, many paddlers have already caught on to this unique experience and the statistics speak for themselves with 42 million people visiting refuges each year and generating almost $1.7 billion in sales for regional economies.

So, where are these trails? The Northeast includes a four-and-a-half-mile stretch along Darby Creek in the John Heinz National Wildlife Refuge at Tinicum in Pennsylvania, taking you through the largest freshwater tidal marsh in the state while you’re on the lookout for herons, egrets, and bald eagles.
Paddlers share a wildlife sighting in the mangroves on a guided kayak tour at J.N. ‘Ding’ Darling National Wildlife Refuge in Florida. Photo by Steve Hillebrand. 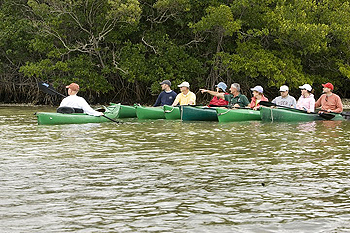 Also in the Northeast is Parker River National Wildlife Refuge in Massachusetts, where visitors can drift along the banks of the largest continuous salt marsh north of Long Island. While you’re in the water look for the many migratory birds attracted to this spot.

In the West, water trails can be found in Oregon, Nevada, and California. The Upper Klamath National Wildlife Refuge in Oregon encourages its visitors to explore by boat in their freshwater marsh and open harbor.

This refuge has the longest marked canoe trail out of the six refuges that make up the Klamath Basin Refuge Complex covering northern California and southern Oregon. Wildlife to see along the ride includes eagles, osprey, white pelicans, and herons.
>Kayaking Brown Trail in Okefenokee Wildlife Refuge. Photo by Blaine Eckberg. 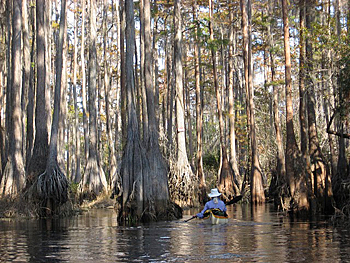 The J. Clark Salyer National Refuge in North Dakota has water trails ranging from five and a half to 13 miles along the Souris River. Muskrats, minks, weasels, American bitterns, and ruddy ducks are among the wildlife that call Souris River home. Although there are trails, this refuge doesn’t offer canoe or kayak rentals so bring your own kayak or canoe.

For the ambitious paddlers and naturalists, head far west and even further north to Kenai National Wildlife Refuge in Alaska. This refuge has two canoe routes stretching 46 to 80 miles long!

The Swan Lake route is its most popular, covering 60 miles and 30 lakes and linked by shorter transit with access to the 17-mile long Moose River. As you take in Alaska’s picturesque landscape take advantage of the top-notch trout fishing!
Joy Campbell shows an Okefenokee visitor a plant while on the water trails. Photo: USFWS. 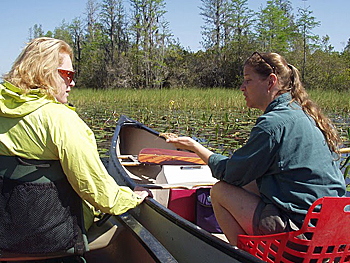 The South has lots of refuges with water trails that can be found in North Carolina, Florida, Texas, and Georgia. The Okefenokee National Wildlife Refuge is a premier destination for canoeing and kayaking due to its vast swamp containing 120 miles of water trails.

You can rent a boat, take a guided boat tour, and even spend the night if you request an overnight wilderness canoe permit.

Joy Campbell, owner of the private company Okefenokee Adventures, is one of the boat tour guides you might come in contact with if you find yourself in the waters of Okefenokee.

The tours are 90 minutes long with the option of staying overnight in the wilderness. Sleeping accommodations are beneath the stars in designated trails or on a wooden platform such as the Roundtop Wilderness Overnight Shelter.
>Sunset at the Okefenokee National Wildlife Refuge. Photo: USFWS. 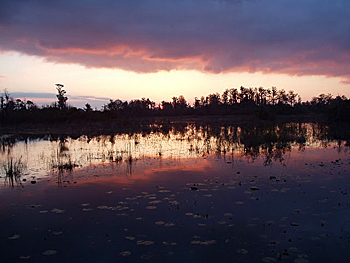 Campbell shares how magical the Okefenokee experience is to her. “I just love being out there. I love the alligators, the solitude, and the night sounds of the swamp.”

“When you’re out there in the fog, you hear the crickets and the owls, and if you close your eyes it’s almost like an orchestra. You can pick up the individual instruments out there.”

“It’s the sounds of the sandhill cranes flying above you and the reflections of the trees on the water on a still sunny day. It’s magical, it takes you away from your everyday crazy life. It makes you realize that there’s more to life than the everyday things you do. Same planet, different world.” 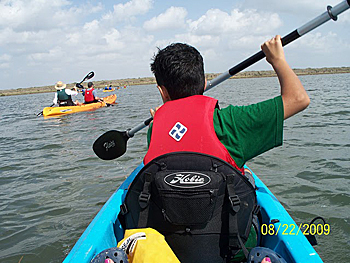 Due to unfortunate flooding, the water trails of the Lower Rio Grande Valley and the Santa Ana Refuges are no longer accessible. However, Laguna Atascosa has great kayak water trails within the Lower Laguna Madre in the Gulf of Mexico.

“You can see species of birds that you won’t see anywhere else in the US,” she says. “including the green jay, chachalaca, and great kiskadee with their flashy colored feathers.”

Brown shares a personal memory that emphasizes the importance of U.S. Fish and Wilderness Services.

“I remember when we first took a family out who had two boys under the age of 6. The parents were concerned for putting their kids on the water but also by the end the boys were paddling and enjoying themselves so thoroughly. Not only did we end those fears, the family decided to buy kayaks.”
>Laguna Atascosa National Wildlife Refuge in southern Texas. Photo USFWS.Joy Campbell shows an Okefenokee visitor a plant while on the water trails. 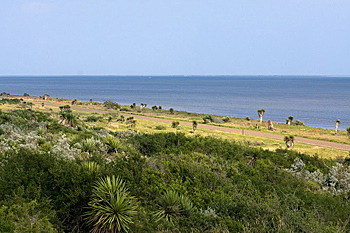 This furthers public awareness on the importance of environmental conservation. Brown concludes, “It opens a door for that family for a whole new interesting way to experience the world.”

“Put a kid in a boat and give him the fish jumping and birds flying, you’ve got them for life. You’ve planted a seed in that young person on the importance of protecting these wilderness areas.”

If you’re interested in working within these national refuges there are plenty of volunteering opportunities and the extra help is appreciated. Brown demonstrates the importance of volunteers and the many jobs available in the Southern Texas National Refuge Complex,

“Between the three refuges we get 46,000 hours of service. Volunteers help us with the kayak program, bird surveys, environmental education, nature tram operations, carpentry, and construction. They don’t just build bookshelves, they build buildings.”

View a slideshow from a November 2010 canoe trip in Okefenokee National Wildlife Refuge.

is an editorial assistant with GoNOMAD and attends the University of Massachusetts in Amherst, Massachusetts. She writes the Travel Reader Blog.

www.gonomad.com
This article was last updated Dec 7, 2018 @ 4:04 pm
If we've inspired you to travel with this story, why not check out the prices to get there and make it happen. Search airfares, hotels, and rental cars here. Thanks!