Romania: Brasov: Near What You Want to See

Any visit to Romania would be embellished by a brief history lesson, given the country’s fascinating evolution.  And a visit to Transylvania and its medieval fortresses, whose inhabitants, tales and myths have inspired best-selling novels and Hollywood films would also be in order.

Transylvania (Latin for ‘land beyond the forest’) is an important historical region in central and northwestern Romania. Given its checkered past, it is ethnically, culturally, linguistically and religiously, very diverse.

It is secured on its eastern and southern flanks by the scenic Carpathian mountain range and it is home to major Romanian cities like Brasov, Cluj-Napoca (a college town), Sibiu and Targu Mures. You may wish to check out the following link to get an idea of the spectacular riches that Transylvania has to offer. I was blown away.

Given our time constraints, my friend Mann and I decided to spend two days in Brasov because of its proximity to Bucharest (a short and comfortable two-and-a-half-hour train ride) and the proximity of Rasnov Citadel and Bran Castle to Brasov.

It was easy to purchase rail tickets online on the Romanian Railways secure website. First class return tickets from Bucharest to Brasov and back cost 128 lei (one USD = 3.75 new Romanian Lei aka RON).

We caught the 7 am train pulling into Brasov at 9:30 am. Shortly thereafter, we were met by Teodora (Thea), a local Airbnb operator and guide, referred to us by our guide in Bucharest, Alexandra.

We retired to a nearby café where working with Thea and her partner Alex, we strategized our itinerary for the day. We would visit Rasnov Citadel, Bran Castle, and a cave temple and monastery.

A short drive from Brasov (in Alex’s car), we first visited Rasnov Citadel located 650 feet above the town of Rasnov, on a rocky hilltop in the Carpathian Mountains.

It is believed to have been constructed in the 1300s by Teutonic Knights as protection against the invading Tartars (assorted Mongol and Turkic nomadic groups who coalesced under Genghis Khan in the 13th century). The citadel was fortified by the local Saxon population to shelter them over extended periods of time, almost becoming a de-facto village.

The location of the citadel was chosen because of the 500-foot-slopes on its northern, southern and western fringes and its defenses included a drawbridge, two bastions, and nine watchtowers. Though portions of the citadel are in a state of disrepair today, the main structures are intact giving you a sense for how things might have been 700 years ago.

A Tractor Ride to the Citadel

A bus shell drawn by a tractor takes you up a narrow and winding unpaved road from the base of the citadel to the drawbridge. However, that distance can also be covered on foot in under five minutes. The Citadel can be explored at leisure and it did not involve strenuous climbs.

We then drove to Bran Castle, which is both a national monument and historical landmark in Romania. Built by the Teutonic Knights in the late 1300’s, this stone castle was used as a defense against the invading Ottomans and, likely, was also used as a customs post. Detailed information about this castle is available here.]

The international renown of Bran Castle is due to its association with Prince Vlad, the Impaler, who was apparently the inspiration for Irish novelist Bram Stoker to create Count Dracula in his novel ‘Dracula’, spawning vampire fantasy.

Romanian legend has Vlad and his army of two thousand fighters, camouflaged as Ottoman soldiers, raiding Ottoman camps of 20,000 soldiers and slaughtering and impaling the Ottomans.

We then drove about 55 kilometers north-west to the mysterious and much-revered Sinca Veche Temple Cave for the positive energy that it is believed to radiate.

The temple cave is set in a sprawling complex with an ancient cave (claimed to be up to 7,000 years old), an ancient church and a water source famous for its healing powers.

We visited the cave and the church, and we quenched our thirst from the tap and Thea and Alex filled their water bottles to take the holy water home.

The church also has a tradition whereby visitors can offer prayers or make wishes by writing the same on a piece of paper, enclosing 10 lei (USD three) with it and dropping it into the designated box.

I offered a prayer for a good friend in Colorado who is battling a serious illness.

Upon our return from the monastery, Alex and Thea dropped us off at our AirBnB in Brasov, located quite high up on a mountain. I found Thea to be knowledgeable, professional, well-organized and reliable. She is ably assisted by Alex and I would highly recommend them as tour guides.

Thea can be reached at infoshashin@gmail.com or by phone at 40775568086. Thea’s AirBnB can be accessed at https://abnb.me/OwWeWImt8L.

After freshening up, we made our way to Casa Romaneasca (a Romanian restaurant), the only restaurant at the base of our accommodation that was open at 9:30 pm and we sat down for possibly one of the best meals on our trip to Romania.

We were impressed with our waiter who assisted us with both the drinks and food menu, helping us make the right choices. After imbibing a couple of pints of Ursus, local draught beer, Mann ordered a beef dish and I ordered a lamb dish and the food was simply delicious.

We then slowly headed back along the narrow, steep and winding roads leading to our AirBnB around 11:30 pm, generally pleased with what we had accomplished that day. When suddenly, out of the blue, we heard a blood-curdling snarl behind us from a stray dog, a serious nuisance that Romania is notorious for.

Luckily, we had our wits about us, we stood our ground and shooed the dog away with some difficulty. We then resumed our trek back to our room, when, after a couple of minutes, we were confronted by another menacing stray dog, baring his teeth to us and snarling away in front of us.

Again, with considerable difficulty, we managed to head the dog off and made it safely to our accommodation.

Both of these were close encounters, which could have turned out badly. We were a tad disappointed that our AirBnB owner (who shall remain unnamed) had not warned us of these perils.

Beware of the Perils

So, as you select places with great mountaintop views, beware of the steep climbs, the danger of stray dogs especially at night and the reluctance of cab drivers to give you a ride.

The next morning, we explored Brasov on foot walking around the town square, enjoying brunch (a sandwich and coffee each) at the local McDonalds, visiting an antique store, walking by the citadel in the heart of the town, visiting the Black Church. 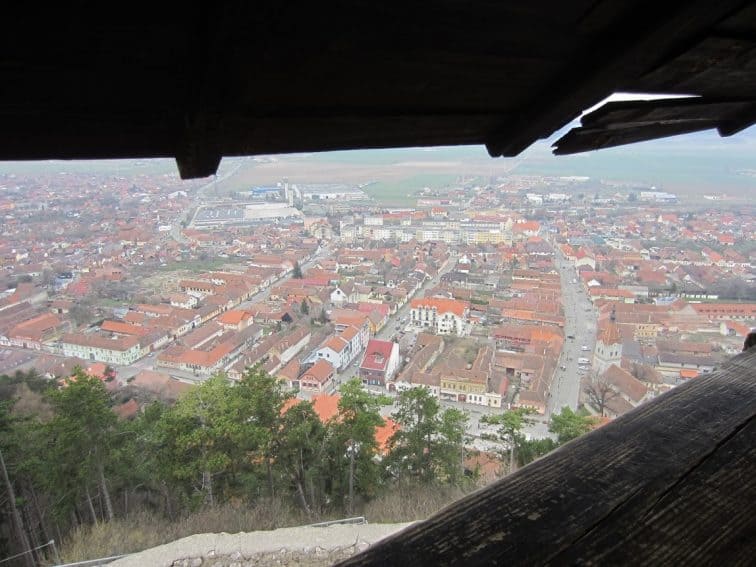 We also visited the first Romanian school and taking the short (three-minute) cable car ride to Mount Tampa (3,000 feet from ground level) from where we enjoyed breath-taking panoramic views of the town, a photographer’s delight.

We also pursued three Roma women for a possible photo opportunity. Despite high heels, they walked at a fast clip and they strode from one bus stop to another until they settled down on a bench awaiting the bus to their destination.

I approached them gingerly, demonstrated a camera clicking gesture with my right hand and held out a 10 lei note.

The adult girl in the group asked if we wanted them to ‘pose’ for us, I said yes, she turned to her mother who was not inclined to refuse a 10-lei bill and the group happily posed for us.

We handed them another 10-lei bill in appreciation.

We then headed back to our AirBnB and made it to Brasov Station to catch the 4:50 pm train, which brought us to Bucharest on time around 7:15 pm.

The train ride both ways was comfortable, all in all, making for a most enjoyable visit to Brasov.