The island of Djerba, floating off the southeast coast of Tunisia, is a popular destination for relaxing in a traditional hammam, grilling your body on a sandy beach or haggling over handmade Andalusian pottery.

Few realize that only a few miles away is one of the oldest Jewish communities in the world; some say it dates back 2,500 years to time of King Nebuchadnezzar.

Covering my head with a white cotton hoodie and tossing my sandals atop a growing pile of shoes, I listen as a fantastic cocktail of sounds comes from inside the oldest synagogue in North Africa.

Prayers, chants and eruptions of laughter alongside a throaty, gargle-like whistle that lingers in the air long after the vibration disappears. It’s the oddest sound but, not mistakenly, a joyous and celebratory one.

Once inside, pilgrims press against one another like iron filings on a magnet. Some bow their heads in front of the ceremonial wooden tower called the Grande Menorah. Others light tall white and red wax candles underneath burning oil lamps.

Fathers lift their children up over their heads to observe the frenzy while Mom pays alms to a bearded gent with a red fez.

I watch the activities unfold, enraptured over the smell of kosher sweetmeat and the controlled chaos.

This is the Tunisian El Ghriba Festival and I’ve come as a spiritual observer.

I just missed the parade moments earlier when the Grande Menorah, a 10-foot (and growing) wedding cake of colorful silk scarves and veils was wheeled through the village of Houmt Souk (also known as Erriadh). Singing and clapping could be heard from blocks away.

Hidden under the scarves is a decorative Star of David, an inscription for the Divinity, two tablets of the law and symbols representing the twelve tribes of Israel.

Women line up at the menorah to pin their favorite scarf and spray with perfume – as if they are helping a bride prepare herself. They mumble requests for forgiveness and favors from the merciful Saint Ghriba ‘the marvelous’ or ‘the stranger.’

I’m not Jewish but the strong female element in the traditions of the El Ghriba Festival is really appealing, especially the gynecocentric tradition of writing wishes on the shell of a raw egg then placing deep them inside a hole in the inner sanctuary wall.

It’s a tradition as old as the Torah scrolls and women are resolute that good fortune and fertility with be granted if they do this. It’s rather amusing watching high-browed women, decked to the nines in their Sunday best, crawl through a sandy tunnel to lay eggs.

The eggs are cooked by candles overnight and given to the person the wish is intended for the next day. My interpreter (Arabic or French is a must here) insists that miracles happen.

The El Ghriba festival takes place annually during the month of May and, to my surprise, I’m not the only secular face in the crowd. Muslims, Christians and curious on-lookers come to sample tasty treats and observe the heritage.

During the Jewish holiday of Lag B’Omer, people from Jerusalem, France, Italy and the United States trek to this predominately Sunni Muslim destination for a religious revival safe from scrutiny and crime.

The island is home to around 1,000 of Tunisia’s 4,000 Jews living among 60,000 Islamic faithful. Unlike extremist countries, Tunisia welcomes religions of all denominations, investing heavily in marketing, tourism and preserving architecture.

The history of the area dates back to 586 BC and weaves together both fact and folklore. The sun-drenched white prayer house with infinite blue mosaics and tall columns was erected in the late 1920s. However, synagogues have been located here since the 6th century BCE, when, according to legend, a pious woman believed to be a beautiful saint lived here.

El Ghriba was her name and she lived a lonesome, solitary existence in a wooden cabin that one night caught fire. Everything was engulfed in flames and she perished but her body survived, completely untouched by the conflagration.

It was then that the Jews of Djerba believed her to be a saint and consequently decided to establish a synagogue on the same place as her hut.

Others believe she may have been a Jewish refugee who fled Israel with a holy rock from the Temple of Jerusalem. Some say that the rock is still buried in a wall or column.

The area has been venerated even more so since the bombing of 2002 when a prayer book was found inside the synagogue opened to a burned page that read “Look in my eyes so I won’t be afraid to die. God, please save the Jewish people.”

Scattered pages in the book are still illegible, but not that important passage.

But, like anywhere in the world, when hate crimes jeopardize the safety of innocent people, police control is the solution.

This beautiful oasis was marred in 2002 when an Al Qaeda suicide bomber (not from Tunisia) drove a truck full of explosives into the crowd killing 21 people. People were outraged, beefing up security and surveillance, much like you’d find in an airport, including metal detectors and sharpshooters on rooftops.

In Tunisia, it’s said that love is measured by the amount of hot peppers a wife puts in her husband’s meal. The National Tunisian beer Celtia in bright green bottles is also sold but my guide insists the fig brandy Boukha, is best.

I’ve covered my share of religious festivals (The Nazarene in Panama, The Lantern in Taiwan, The Krampus in Berchesgarden) and always the aim is to suspend reality by relying on eccentric rituals, fantastic storytelling and auspicious omens.

El Ghriba is no different. It also uses generosity and fabulous food to lift spirits and bring about hope and optimism. It’s a fantastic journey into understanding the world of Judaism and a fundamental part of their culture.

A Model of Tolerance

More importantly, because it takes place in an Arab country, this model of tolerance gives you pause that the island of Djerba, like all of Tunisia, is a very special place.

For places to stay, there are four- and five-star spa clubs up and down the coastline, but if money is no object, the prestigious Hasdrubal Prestige (part of a chain of Hasdrubal Hotels) boasts comforts and elegance that rival a king’s castle.

There are 222 luxury suites plus one giant 3,444-square-foot Presidential Suite with four separate bedrooms and a private pool.

All rooms have a private deck overlooking a series of swimming pools dotted with bridges, waterfalls and palm trees. There’s no shortage of restaurants to dine in, five in total.

I insist you try a Tunisian favorite – Assida Zgougou for dessert, with pinenuts, yogurt and honey. General Manager Karim Ben Smida Abbou is at your every beck and call greeting you with red rose petals sprinkled throughout your visit.

Air France has flights from NYC to Tunis with a connecting flight through Paris on Tunis Air. Tunis Air flies directly from Tunis to Djerba. The Lag B’Omer Pilgrimage to La Griba is on date for May 2010. 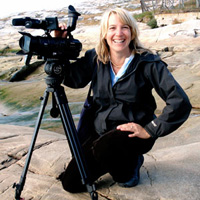 Sonja Stark is a videographer and editor from Selkirk, New York. She’s a regular contributor to GoNOMAD and writes a daily blog called “Cross that Bridge,” part of the GoNOMAD Blog Network. Visit her website, PilotGirl Productions.

www.pilotgirlproductions.com
This article was last updated Jan 13, 2019 @ 10:42 pm
If we've inspired you to travel with this story, why not check out the prices to get there and make it happen. Search airfares, hotels, and rental cars here. Thanks!