Malaysia: Viewing Our Cousins, the Orangutans

Viewing Our Cousins, the Orangutans: A Wildlife Tour on the Kinabatangan River

You would think that it wouldn’t be that hard to spot an auburn-haired orangutan in a tree. But it is.

No sooner had I dumped my bag at the lodge on the Kinabatangan River than river guide Nelson hurried me into a waiting boat to head down river before dusk.

Fifteen minutes later Nelson cuts the boat’s engine, nods to the left and shushes everyone. I try to follow his line of vision, but disappointingly couldn’t see anything.

Finally I see him, an adult male, hanging by one arm and chowing down on a handful of leaves in the afternoon sun.

He is calm, quiet and watchful. I sit there amazed staring up at him in deferential silence. Only a flock of hornbills taking flight across the river breaks the stillness and quickly returns me to reality.

The most impressive thing when you get up close to an orang-utan is how similar we humans are to them. Everything about them feels familiar. Weirdly, I felt like I was staring at some long-lost relative.

You get the sense they recognise you, too. This feeling of mutual recognition is not however surprising given that amazingly, we share over 90% of our genetic make-up with orang-utans.

The meeting of eyes between ape and human is an edifying experience, and all the more so for being unexpected.

When I planned the trip to Borneo, I hadn’t factored in seeing an orangutan in the wild. Orangutans, which are native to Borneo, were on the itinerary, of course. But as an endangered species, I thought there was little chance of seeing one in its natural habitat.

Instead I had planned to go to an organutan sanctuary, where you can ogle at the orphaned baby orangutans at feeding times amid other onlookers. There, I knew I’d be guaranteed a glimpse of the notoriously solitary creatures, but the experience is incomparable to seeing them in the wild.

The possibilities were, however, slim. Orangutans maintain complex social networks of loose relationships, but adult males are usually found alone, while adult females are usually accompanied by one or two of her offspring. In short, they aren’t easy to spot.

Worse still, their numbers are declining fast. It is estimated that well over half of their number have died mainly due to loss of habitat over the past 60 years. There is no let-up in sight either, with the rate of decline predicted to continue.

With most of the remnant wild populations located outside protected areas, my chances of seeing these apes weren’t looking great.

That was until I met expert river guide Nelson, who soon raised the odds with his eagle eyes. Spotting the adult male was to be the first of many wildlife sightings that would leave me feeling like an intrepid explorer in unspoilt jungle.

The Kinabatangan River, which lies in the eastern lowlands of Sabah in Maylaysian Borneo, is one of the best places to experience these wonderful animals, and many more, in their natural habitat.

The wildlife sanctuary is only 26,103 hectares in size, but within this tiny area the diversity of animals and flora is remarkable.

Kinabatangan is all the more special, because it is hemmed in on all sides by palm oil plantations – one of the biggest causes of deforestation and loss of habitat for orangutans.

The rapid expansion of plantations in Borneo has significantly accelerated habitat loss, but jobs like Nelson’s in eco-tourism are offering sustainable, alternative sources of work and income to nationals that might otherwise be tempted into illegal trades, like logging, to earn a living.

Riding back down the river in the last of the setting sun and a haze of contentment, I was party to yet more treasures.

Casually, Nelson pointed out proboscis monkeys and silver langurs high up in the trees, while mischievous long-tailed macaques gambolled along the river banks.

Hornbills, white-bellied eagles, swallows, kites and red, yellow and blue kingfishers darted between the trees in a harmony of noise and splatter of color.

With a recorded 1,000 plant species, 250 bird varieties, 90 fish species and reptilian, and 50 types of mammal cramped into this small area it all felt too easy. Sumatran rhinoceros have been spotted here and there are herds of pygmy elephants often come to the riverbanks to drink, bathe and play.

I almost felt like I was cheating by the ease with which we spotted the vast array of animals and birds as we sailed back down the river with the setting sun behind us.

Back at camp, Nelson decided a jungle night tour was in order. Making sure to tuck my trousers into my socks to avoid the pesky leeches getting in, and cover my body as much as possible to fend off swarms of mosquitoes we set off into the jungle with headlamps.

Admittedly, I was a little spooked at first when I got a face-full of cobweb, as we trudged deeper away from camp into the jungle. It triggered thoughts of a million other creepy crawlies that might be lurking in the dark jungle.

My growing anxiety wasn’t abated by Nelson listing all the creatures that we were likely to encounter, either.

As we crept quietly through the forest my apprehension was soon forgotten, however, when Nelson flashed his torch over what at first looked like a patch of mud, but was quickly revealed to be implants of elephant footprints. Fresh dung nearby provided yet more tantalising evidence of their proximity.

My excitement was almost tangible, but then I remembered a wildlife documentary I’d seen on elephants’ potential for charging.

Sadly, the elephants remained elusive for my whole stay at Kinabatangan. We did however see a civet cat, spotted thanks to its gleaming green eyes that made the walk worth enduring the creepy crawlies.

Early next morning on the final day of my two-day tour, Nelson woke me with an unsympathetic bang on the door for the second trip downriver.

At dawn the river was shrouded in a lilac-coloured mist slowly rising up into the trees, as if unveiling its secrets to the lucky spectator. The mysterious ambient made me forget the ungodly hour and I soon cheered up.

We slunk slowly downriver in the morning silence. This time there was no eager expectation to mentally collect sightings, but a sluggish relaxation as birds flitted to and fro between the river banks.

After about 20 minutes, however, Nelson cut the engine and nosed the boat into the left bank, again silently pointing up into the trees where this time I clearly saw two baby orangutans swinging between the branches; playing – to the untrained eye – just like human siblings. They were disinterested in us, but their mother was close by nonetheless.

Suffused with smug satisfaction having seen four orangutans in the wild over two short days, we return to the jungle lodges where I began my journey out of the jungle back through the carbuncle of plantations.

The recollections, however, made the hour-long bumpy trip back along the palm oil plantation roads away from Kinabatangan all the more bearable this time round.

Sepilok and Kinabatangan River: Sepilok Jungle Resort, a short walk from the Sepilok Orang-Utan Sanctuary and Rehabilitation Centre, is an ideal base to arrange trips out to the Kinabatangan river

Companies running tours to Kinabatangan River lodge their guests either in Sukau or in camps along the river.

Two options include: the more upmarket Sukau Rainforest Lodge, or 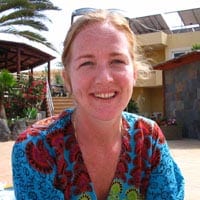 Michelle Perry is a London-based journalist specialising in business and travel.