Sometimes when I hear the whine of jet engines, I think of the beach.

I don’t expect that to make sense to you — unless, like me, your childhood was defined by an infatuation with jetliners, and summers spent at a beach directly below an approach course to a major airport.

That would be Revere Beach, in my case, just north of Boston, Massachusetts in the middle and late 1970s. Then, as now, the city of Revere was a gritty, in many ways charmless, place: rows of triple deckers and block after block of two-story colonials garnished in gaudy wrought iron.

(This is a city so architecturally hopeless and awash in tackiness that it can never become gentrified or trendy in the way that other Boston suburbs have.) Irish and Italian families spoke in a tough, North Shore accent that had long ago forsaken the letter R. Shit-talking kids drove Camaros and Trans-Am’s, the old country cornuto horns glinting over their chest hair.

Revere’s beach was the first public beach in the United States. Like the rest of the city, it wasn’t the kind of place that lent itself to niceties or sentimental descriptions. The roller coasters had long ago burned, and the boulevard was dotted by biker hangouts and the sort of honky-tonk bars that, as a kid, you never dared set foot in, no matter how bad you needed to use the bathroom.

Seagulls swooped and gorged on the garbage toppling out of barrels and dumpsters.

But it had the sand, and water that was clean enough to swim in—with those long, flat, shimmering low tides that seemed to recede all the way past Nahant and into the horizon. We spent our summers here — nearly all of the weekends and many of the weekdays too. My parents would have the car packed by 10:00 a.m.

I remember the folding chairs, the towels, and the endless supply of Hawaiian Tropic suntan lotion, its oily coconut aroma mixed with the hot stink of sunbaked Oldsmobile leather.

I swam, dug around for crabs, and endured the requisite mud-ball fights with my friends. But for me, the real thrill was the airplanes. Revere Beach’s mile-long swath lines up almost perfectly with Logan International Airport’s runway 22L, the arrivals floating past at regular intervals, so close you’d think you could hit them with one of the discarded Michelob bottles poking out of the sand.

I’d bring a notebook and log each plane as it screamed overhead.

They’d appear first as black smudges. You’d see the smoke—the snaking black trails up over Salem or Marblehead as planes made the turn onto final approach. And then, a few minutes later, came the noise. A noise unlike anything else. Little kids and the grownups too would cover their ears.

People today don’t realize how earsplittingly loud older-generation jets were. And they were low, maybe 1,500 feet above the sand, sinking lower and lower and lower until disappearing over the hill at Beachmont, just seconds from touchdown.

Loud, low, and dirty too. Those smoke trails would settle to earth. At my grandparents’ house in Beachmont, a steady stream of arrivals left the steps and porch rails coated with soot.

I remember all of them: TWA 707s and L-1011s in the old, twin-globe livery. United DC-8s and DC-10s in the ’70s-era bowtie colors. Flying Tigers DC-8s and 747s. Allegheny DC-9s and One-Elevens. Eastern’s 727 “Whisperjets” that did anything but whisper. Braniff, Piedmont, Capitol and Seaboard World; TAP, North Central, Zantop and Trans International.

The term “regional jet” wouldn’t exist for at least another decade. Instead, we had “commuter planes.” There were PBA and its little 402s and the occasional DC-3; Air New England’s Twin Otters and FH-227s; Bar Harbor’s Beech-99s. Pilgrim, Empire, Ransome, and Downeast.

The arrivals pattern to 22L hasn’t changed. It still passes directly over Revere Beach. After I finally became an airline pilot, one of my biggest thrills was being at the controls on a 22L arrival into BOS, looking down at the same sand from which I spent a childhood looking up. But other things are different.

The demographics of the city have changed drastically, for one. In the Revere of my youth, pretty much every last family was Italian, Irish, or some combination of the two. At the beach it was no different. Today, both the neighborhoods and the sand are a virtual United Nations of the North Shore. 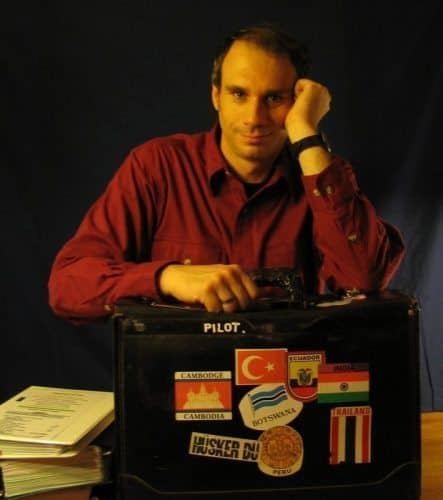 Those harsh, R-less accents are joined by voices in Hindi, Arabic, Portuguese, and Khmer. The muscle shirts, Italian horns, and shamrocks are still there, but the sunburned Irish complexions are now just part of the mix, contrasted against the tones of Somalia, Ghana, Haiti, and Morocco.

And overhead, the oily black smudges are gone. And nobody blocks their ears anymore. Heck, there’s hardly much of a reason to bother looking up. Jets nowadays are much cleaner, much quieter — and, I have to say, a lot less exciting. When I was twelve, each airplane had its own silhouette, left its own imprint on the sky.

My friends and I could recognize a DC-9 from a 727, ten thousand feet above us, at a second’s glance. Jets today, like so many other things, have become dull, generic and absent of any real spirit. Many are indistinguishable even at close range, and it’s hard to watch the sky and feel any sense of stirring or drama.

The endless, ho-hum procession of A320s, 737s and RJs just doesn’t get the pulse going, or the sunbathers pointing, the way a 707 or a DC-8 would — its motors shrieking, those ghastly black plumes pouring out behind.

Revere itself has both gained and lost character over the years. The skies above, though, have mostly just lost it.

Patrick Smith is an airline pilot, air travel blogger, and author. His Ask the Pilot column, from which portions of this website have been adapted, ran in the online magazine Salon.com from 2002 until 2012. Patrick has appeared on over 300 radio and television outlets, including CNN, PBS, the BBC and National Public Radio. He is regularly cited in print publications worldwide and was voted one of the “25 Best Bloggers” by TIME magazine. His op-eds and articles have been published in The New York Times, the Boston Globe, and several other newspapers.

Buy the book Cockpit Confidential: Everything You Need to Know About Air Travel: Questions, Answers, and Reflections