The Camper Book: Just an RV and Me

Stories About People Traveling Around the US in their RVs

Dave Hoekstra’s newest book is a multi-purpose compendium focused on the history of, the culture behind, and general information on the RV lifestyle. With RV travel rising in popularity at an unprecedented rate among people from all walks of life, it could be a good time to see what all the fuss is about!

In The Camper Book: A Celebration of a Moveable American Dream, Hoekstra looks to inspire a longing for adventure in his readers, providing great stories and useful tips from his experience living on the road in his Ford Transit Van, “Bluebird”,  from June 2016-March 2017.

The book includes sections written by Hoekstra about fellow RV enthusiasts encountered at locations scattered all along his 24,222-mile journey, complete with gorgeous photographs taken by his close friend and associate Jon Sall, who went along for the ride.

Here is an excerpt from their book, focusing on the experience of one solo RVer and how her life was changed by her experience living on the open road:

Excerpt from the Book: RV for One, Please

“An RV can seem mighty big when you are traveling alone.

Louise Thorncraft was camping solo in her twenty-four-foot Starcraft travel trailer at the Great Falls KOA in late June 2016. She was smiling around every corner, and true grit tugged at her gentle soul.

The long, tall woman with a cowboy hat pulled her seven-thousand-pound trailer across America with a 4 x 4 Toyota Tundra truck. Outside of bikers and tent campers, the number of single camping people is small, and they’re even fewer single female RV campers. 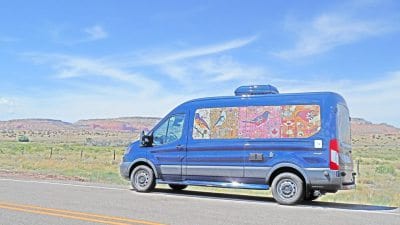 “I had thoughts about that,” Thorncraft said during a conversation in her RV. “Safety for sure. I’ve had to do this step by step. A year and a half ago if someone told me I’d be doing this, I would have said, ‘You’re crazy.’

I came here to visit for a month. My mother lives here [in Great Falls]. She’s going to be ninety in September. Fortunately, I can work through the internet.” Thorncraft sold her house in Denver in February 2016. The Denver area became too crowded for her. She said, “I originally wanted a tiny house, but when I started planning it, I saw it would take me too long. So I got an RV.”

Thorncroft, 59, was a fiber engineer for a telecom company. Her market was Chicago. She bought a Jetpack for remote internet connection. “I look at maps of Chicago all day long,” she said. “I just open my windows and get to work. Focus isn’t a problem. I’m goal-oriented.”

Ironically, the ARVC, the National Association of RV Parks, is based in Denver, Colorado. Paul Bambei, president and CEO of ARVC, said, “There’s an increase in the virtual professional out there. We have doctors and lawyers that are set up in their RVs or Park Models. People want to stay connected to their world.”

When Thorncraft pulled her rig into the Great Falls KOA, she set up the RV’s wheel blocks on her own. She did not need the assistance of the congenial KOA staff or any Montana cowboys. “I can hook it up by myself, but I just can’t fix stuff,” she said. “I do have a list of phone numbers in my truck as well as notes.” 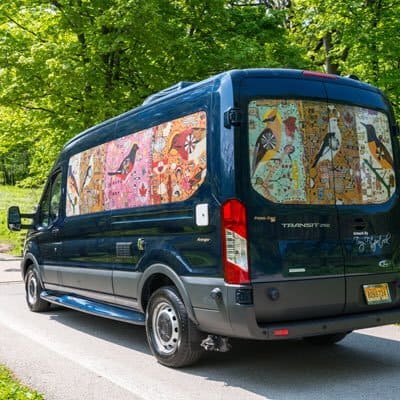 Thorncraft said all her friends were supportive of her adventure. Her Colorado-based son, Aaron, who is in his mid-thirties, wants to make a trip with his mom and bring his family. Sometimes you see family clearer in the distance of the road.

“The hardest part was that I had a greyhound that was eight years old,” Thorncraft said. “His name was ‘Ridin’ in Style.’ That was his [race] name. I thought he would love this whole experience. He got diagnosed in April with bone cancer and only made it a couple more weeks.”

Thorncraft was born in Evanston, Illinois, just north of Chicago. Her parents were from Montana and New England, and they met in the middle of the country when her mother, Sally Mayer, was attending Northwestern University in Evanston. Thorncraft’s late father, Arthur Battey, was a Chicago insurance executive whose work later took him to Colorado, New Hampshire, and Cincinnati.

Thorncraft’s trailer had an expansive workspace, bright office lighting, large windows, and a DVD player/television. “I’ve been writing in a journal because this has been such an incredible experience,” she explained. “So much has happened in a short time. I just want to be able to remember everything.”

It moved like this: Thorncraft sold her three-bedroom ranch house at the end of February 2016. She bought the Toyota truck in March and bought the travel trailer in April. “I parked it at a state park that was near my storage unit and my son’s place,” she said. “I figured out how to drive it and how to operate everything. I stayed at a friend’s farm for several weeks and headed up here on Memorial Day weekend. I’ve been here all of June.”  She obtained the insurance in Chicago then headed out.

That’s making a commitment to change.

What becomes of place when the place is fluid?

“That’s so interesting,” Thorncraft said. “I thought I’d visit my mother and work my way down to warmer climates during the winter and decide where I want to settle down. I have never actually said, ‘That’s where I want to live’ and gone there. I don’t want to live my whole life without finding that place. Colorado has never been a place where I feel, ‘This is home.’ I was concerned I would feel uprooted and a little bit lost by living in the trailer. That’s what is so exciting about this whole experience. Where is home? And feeling at home wherever I go. 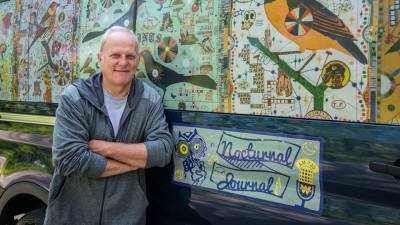 “I guess the goal for me is to figure out where home is.” ”

Dave Hoekstra is the host of the radio program Nocturnal Journal with Dave Hoekstra on WGN-720 AM. A Chicago Sun-Times columnist from 1985 to 2014, he is also the author of The People’s Place, The Supper Club Book, Cougars and Snappers and Loons (Oh My!), and Ticket to Everywhere and the coauthor of Disco Demolition.

Jon Sall has been a professional photographer for over twenty-five years, beginning at the Chicago Sun-Times. He is also an adjunct professor at Columbia College Chicago and teaches a course in digital storytelling.

Buy this book: The Camper Book: A Celebration of a Moveable American Dream

Brian Gage is a resident of Amherst, Massachusetts and a lover of all things outdoors. He enjoys traveling to exciting new locations, attempting to take in the most beautiful natural sites he can see. He is an avid hiker and climber and can be found at the Hadley Central Rock Gym on many of his free days.