Morocco: Discovering Asilah, Along the Coast 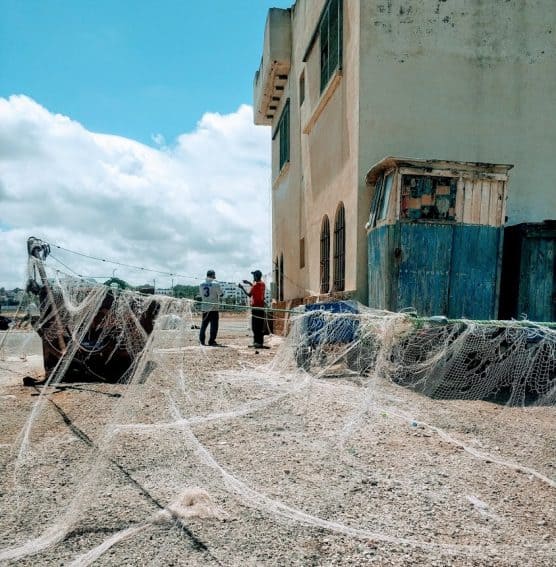 Asilah, an Artist Haven and Morocco’s answer to a small New England town

Everything I know about coastal New England I learned from reading John Updike novels.

Thus it’s safe to say that I believe every suburban seaside town is not always what it seems on the surface. So when I arrived in Asilah, a sleepy fishing town 31km South from Tangier, slightly hunched over from a month into an unglamorous life as a backpacker, with a scenic port and a colony of seagulls cawing in the distance, I had what you can only call an epiphany:

“Asilah is Morocco’s answer to a small New England town in an Updike novella, where the Middle Class come to feast on seafood, indulge in artistic tendencies and ponder existentialist questions.

Whether you are a literary genius on the cusp of discovery or prefer the canvas for expression, like say Henri Matisse who enjoyed time here once upon a moon,  Asilah, known also as the “City of Arts” offers you space to create or at the very least find inspiration, while giving, as Updike would say, “the mundane its beautiful due.”

The first order of business in assimilating into any suburban town is to live as if you belong there.  So I traded in a hotel room for a one-bedroom flat spread out over two floors with a crowning glory: a rooftop overlooking the Medina −Arabic for city.

I rose early to watch mothers in brightly-colored djellabas on school runs, merchants reclined in chairs, catching up on morning news while awaiting customers, and in the distance, Berber women touting flip albums of their greatest henna hits to convince tourists to sit for this ancient decorative art, as a farmer pushes along his donkey-laden chart.

Yes, real-life donkeys and horses can be spotted working hard on the streets in Asilah.

From up here, I  enjoy the city’s eclectic architecture: the beautiful projecting oriel window (mashrabiya as it’s called) to my right and the ornate colorful doors across from me speak of the city’s Maghreb roots, while the blue and green shutters of the neighbors to my left, attest to the fact that until 1956 Asilah was part of the Spanish Protectorate in Morocco.

Like in any good old suburban coastal town, my neighbors know each other by name, stopping to extend greetings on the street: “Alsalam Ealaykum” as cheeks are kissed and before extending a hand for a shake, it is customary to first place said hand on one’s heart.

Unlike bigger Moroccan cities like Marrakesh or Fez where the “where are you froms” echo through public spaces, bouncing from one souk to another and motorcycles, vrooming along sidewalks vie with pedestrians in an already-crowded Medina, Asilah is a different story.

Here artisanal stalls and galleries peak out from the rows of white-washed residential houses with blue, green and pink accents.

This is not to say that you will not hear your share of “ Welcome to Morocco” and as a tourist of color, be prepared for the occasional “Mama Africa” as you take in the sights.

During peak periods in July and August, streets are bustling as many  Moroccans descend on the town to escape the heat in the South.

Do be prepared, some shops don’t have set regular hours. But that is okay, if you are lucky like I was, you will befriend two locals while waiting for an internet cafe to open.

This friendship will grow over cups of tea, discussions on Moroccan culture and a nightly game of Parchi at a cafe.

Parchi, modeled after the medieval Indian board game Pachisi also has an American counterpart; Parcheesi, I wouldn’t be surprised if households in Updike’s New England have a set or two.

“That’s just the way things are in the North, people are more traditional than in the South where sometimes it is hard to tell the difference between Morocco and Europe.”

Mustapha, my friend explaining why I don’t see any women enjoying coffee or “Nana,” Moroccan tea, as the locals call it on our nightly cafe visits.

Instead, local men sit socializing or staring into the distance with a beverage or indoors on rows of chairs catching up on the latest football match on a television screen. “It is not that women are not free” Idriss, a literature teacher born and bred in Asilah chirps in “it is just a matter of what they are used to.

“Women here go to visit each other in their homes while men go out to cafes.  Decades ago you wouldn’t even see women on the streets, things are changing, but to think they aren’t free to come here simplifies the issue.” 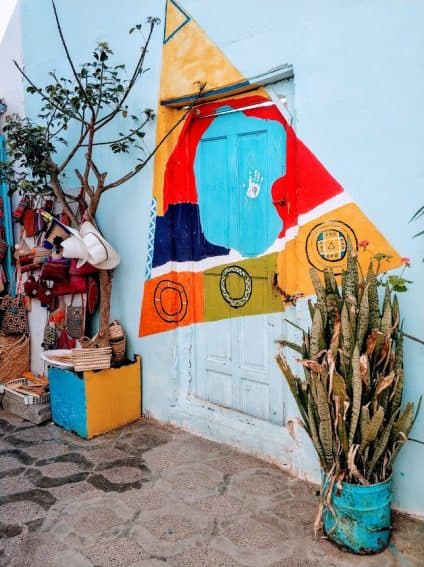 As I ponder gender roles and tradition,  topics many suburban towns grapple with to some extent, scenes I have witnessed in Asilah flash by –men picking up their children from school and helping in the kitchen to women in the latest fashions working in media and owning their own businesses.

I take another sip of my Moroccan tea and watch the street lights flicker.

Matisse is a Street Artist.

Street Artists are the Matisse’s of Asilah,  as you will discover while moving along with the medina’s winding streets or exploring the lived-in avenues of the new town, as colorful murals, from the abstract to the more literal, are a part of Asilah’s DNA, thanks to the “International Cultural Moussem of Alison,” a yearly art festival held in August.

The festival began in 1978 when Mohammed Melehi, an artist, and curator joined forces with photographer and politician Mohamed Benaïssa to invite artists from across the globe to paint murals on the medina’s walls.

Credited for boasting Asilah’s income and making it the middle-class haven for artists that is today, concerts, design lectures and poetry readings are all on the agenda. Oogle and be sure to ponder the meaning before moving on to the next.

The murals change every year so if you don’t find your Matisse, there is always next year.  While you are in the Medina pop into one of the many art galleries, studios, and exhibition spaces dotted around, covering a range of topics, from Arabic calligraphy to modern art.

“All my designs are simple but Moroccan-inspired and compliment my art”  Tarek, owner of “ Something Blue” a boutique-cum-art studio specializing in clothing, accessories, and art, explains as he shows me around his store, just a few meters away from the “Bad Elbahr” entrance to the Medina.

Tarek, in relaxed linen slacks and a sky blue shirt, looks the part of a hippy artist, his brown-streaked hair tied back in a hipster man-bun as he discusses the inspiration behind each piece

A kaftan in sunshine yellow with an asymmetric hem catches my attention.

It is 200D, I tell him I will give it some thought and return.  A few steps from  “Something Blue” an old man, weathering the sun in a shirt, face-cap, and trousers ( the standard uniform for older men when not in a Kandora) is making an array of leather slippers and sandals with his tools.

I watch carefully before moving on. So many items of wearable art hang from shops in the Medina, from woven bracelets and beautifully dyed scarves to handmade babouche, traditional Moroccan shoes. Did I buy the yellow kaftan?

Well, you will have to visit “Something Blue” and find out, if it’s still hanging there, then I didn’t, as Tarek creates one-of-a-kind wearable pieces of art.

No need to be a starving artist in Asilah with the assortment of food on offer.  From paella to tortillas and tacos, the city’s Spanish roots is evident in the food culture. But fish without a doubt is the breakout star.

The smell of prawns slow cooking in tangines slowly wafts into the street as the sizzle and spattering of hot oil from vendors frying sardines battered and coated in flour mixes in with the sight of whole crabs on a bed of salad on the tables of restaurants that line street just outside the Medina.

Eateries catering to locals off the beaten track serve an assortment of fish with fries from 30D. The city’s port is a mere 10 min walk from the medina.

Here fishermen sell their fresh bounty, as stray cats prowl hoping for leftovers. Fish aside, don’t be afraid to embrace street food. From Chebakia to pistachio briouates, Moroccans like their sweets!

Stop to admire the vast array of treats behind glass-encased displays. From the fried donuts to the baked pastries, from the honey-glazed to the amlo-dipped, Sfen, remains one of my all-time favorites.

There is a saying here “The sfen bakers are worth as much as kings” and a bite into this fried vegan-friendly donut and you will see why.  It’s crispy, it’s good, it’s golden delight if you have yours with powdered sugar or honey.

Vegetarians and vegans can enjoy freshly made falafel ( you watch as it is made right in front of you) and wash it down with sugarcane juice blended with ginger and lemon.

Don’t leave without trying Msemmen, Moroccan crepes slathered in Amlo, which is almond blended with argan oil. You wouldn’t regret it.

Blue is the Warmest Color

Inspiration can come in waves, as any artist can attest to, sometimes this can be more literal than anything, from Hemingway (Old Man and the Sea) to Van Gogh (The Sea at Les Saintes-Maries-de-la-Mer) many artists have found the sea a worthy muse, and it is easy to understand when in Asilah.

There is poetry at the sight of a man shore fishing on an empty beach as the sun rises, or watching a group of boys casting their rods high up from the city’s accropodes as an old man in knee-high boots digs for octopuses in the shallow water below.

Make time to visit Paradise beach about 7km south of Asilah, for a relaxing dip in the sea

Updike once said, “The size of a life is how you feel about it.”  In Asilah, big inspiration can come to you in small bites, if you let it.

There is a whole life outside the tourist hotspots, from the busy market where makeshift stalls take up the pavement selling everything you can think of, including fresh fruit and vegetables, flowers picked by old women from nearby villages under straw hats adorned with multi-colored pompoms and life chickens clucking by the roadside.

On Thursday,  a bigger market on the outskirts of town is held,  think of it as a flea market with food and drink stalls. I picked up an Acne denim dress for 20D −bargains await you if you are not afraid to batter with locals!

At the end of the day, what makes Asilah so special are the people, the slower pace and of course all that art, as Updike once said.  “What art offers is space, a certain breathing room for the spirit.” 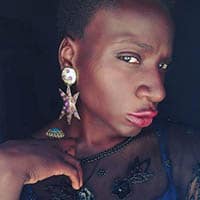 MB Akinyemi is a Fashion and Travel journalist currently traveling around Morocco. She likes to think she is human jukebox and dresses for every occasion, even if that occasion is walking to the grocery store. follow her stories on Instagram.