How My Smartphone Ruined my Travel Experience

Going around without a working smartphone can make you feel like the only lucid person in a world of zombies. On an underground train, where I first found myself phoneless, everyone is either absorbed in a screen or talking to a friend.

It was midnight and I was on the tube, rattling my way towards London’s East End to find my dirt-cheap Airbnb.

I had been traveling around Europe with my sister, but she’d flown home early and I’d come to the U.K. on my own.

The familiar weight of my iPhone was in my pocket, but its battery was running low and I needed to save it for navigation purposes. With nothing to do, I felt strangely conspicuous.

There were two very drunk girls chatting one seat to my right while three people sat alone, eyes down, with their faces illuminated. When a man’s eyes darted up from his smartphone, I quickly looked away.

I suddenly heard a drawling “Excuse me? Did you eat some of my pizza?”

One of the inebriated women was pointing to an open box with two partially-eaten slices and a glob of chewed up crust left inside. “Listen, I’m not judging you,” she slurred, “but if you want some you should just ask.”

Cell phones can provide a smooth, easy exit to unsavory social interactions. In this situation, pretending to be busy on my phone after a quick response could have done the trick. Instead, with nothing to shield the interaction, I spent the rest of the journey arguing my innocence in the crime of pizza-thievery.

It was my first wake-up call to the fact that I had become too dependent on my phone. By the end of the night, the device would be out of commission for good — and it wouldn’t be such a bad thing. Navigating an unfamiliar country without my phone showed me the ways that relying on it was cheapening my travel experience and disconnecting me from the real world.

Navigating by smartphone stops you from getting to know your travel destination.

I emerged from the Underground and pulled out my phone to navigate my way to the Airbnb. With a sinking feeling, I realized that all I had was a blurry screenshot of a map — I had forgotten to load up the real thing, and I had no phone data in this country.

Was I to navigate without a dot to represent me, like some sort of primitive early human?

I wandered uncertainly down the sidewalk, trying to orient myself. Two men stopped to help me, but they were as confused as I was by the screenshot.

“Why doesn’t it move?” the taller one asked, trying to rotate the map with his fingers.

I like to think that I really get to know the cities that I visit, but relying on a phone for directions can hinder your ability to do so. In one study, people who navigated a city with a paper map could later draw the city with greater accuracy than those who used a GPS. They also traveled quicker and with fewer wrong turns.

Besides, research shows that phone-related injuries are increasing at about the same rate for distracted pedestrians as they are for drivers, and the last thing any traveler wants is a trip to the hospital.

When I finally found my Airbnb, thanks to the help of another kind stranger, I rooted through my backpack to find my phone charger. With horror, I realized that the British portion of my outlet adaptor was missing. I used my last few battery percentage points to text my parents, the situation and fell asleep.

Your smartphone can keep you from connecting with the locals around you.

It’s a strange sensation to wake up and have no idea what time it is. Out of habit, I reached for my phone first thing. I was met with the black stare of a battery-dead corpse.

The sky outside was uniformly gray, and I had the disorienting thought that it could be anywhere from 8 a.m. to 4 p.m. Until I asked a woman on the street, I had no idea.

Exploring London without a working cell phone I asked myself the age-old (that age is around 10 years) question:

Do our smartphones really connect us, or do they divide us? I interacted with more strangers that day than I ordinarily do in a month.

With no hand-held fountain of information at my disposal, I regularly relied on other humans for directions and time.

My lack of digital distraction also seemed to invite conversation — if only with the similarly disconnected.

The more you rely on your phone, the less you trust strangers, according to a 2016 study.

Research by the National Bureau of Economic Research shows that people who trust others tend to have a higher sense of well-being.

A 2014 study found that connecting with strangers — even very briefly, according to other research — makes you happier. While traveling, this can come with the added benefit of learning about local people, cultures and happenings.

Predictably, my sister and I took hundreds of pictures throughout our Europe trip: photos holding up the Leaning Tower of Pisa, selfies in front of the Mona Lisa, snapshots of beautiful nature and architecture.

Once I lost the ability to take pictures myself — I used my phone for that — the incessant snapping of my fellow tourists’ cameras became glaring. It was especially irksome at the Tate art museum, where, to my surprise, I saw multiple people taking photo after photo while barely glancing at the artwork with their own eyes. 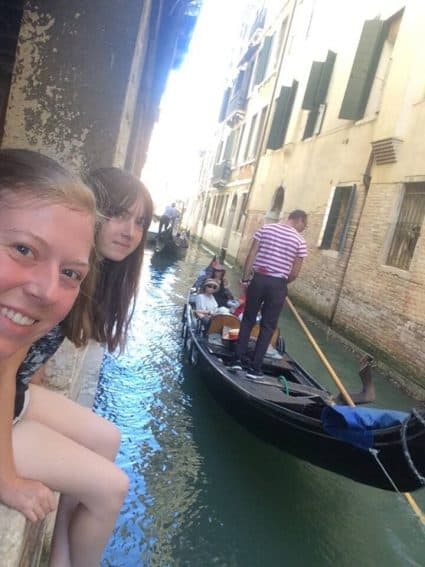 Photos seem like a good way to capture a trip, but research suggests that taking them can stop us from forming memories.

A 2013 study found that participants who took photos of objects in an art museum remembered fewer objects and fewer details about them than those who did not take photos.

This is similar to the 2011 study that found participants less likely to remember information if they knew it would be saved onto a computer.

Apparently, the human brain doesn’t want to waste storage on information it can easily retrieve externally. When it comes to travel, though, I’d rather retain vivid memories than search through old photos.

Going smartphone-free reconnected me to the real world.

It was oddly meditative to see London without a buzzing distraction in my pocket. I was cut off from friends and family back home, but, unlike the photo-snapping and social media-scrolling tourists around me, I was locked in the present.

I could only interact with the people in my physical vicinity and I had only my mind to chronicle my experiences.

At the end of the day, I leaned against a concrete railing above the darkly rippling River Thames and watched the sun set red and gold behind Tower Bridge. I had just my eyes and brain to capture the moment, but that was enough.

Sarah Eddy, left, is a journalist from Eugene, Oregon.