Remembering the American Offensive in World War I

It was with tears in my eyes that I continued on my journey of exploration. Today the landscape is verdant and alive with wheat and grapevines. Ninety years ago it was a desolate moonscape of charred trees, the air choking with the rotting stench of death.

Serge’s words echoed in my mind as the monuments to the battles and the cemeteries of the dead blurred in their multitude. Millions of lives were lost in this War To End All Wars.

As the 90th Anniversary Commemorations build to the Eleventh Hour finale, I think of our comrades-in-arms, and the deep ties of the American and French people whose soldiers fought side-by-side from 1776 onward to preserve the freedoms we all enjoy today. “God Bless America!” indeed, and “Viva La France!”

Background on the American Offensive in Northern France in WW I

Although the United States did not officially enter the war until April 6th, 1917, there were in fact Americans in the Meuse much earlier. Volunteer American ambulance corps helped transport the wounded in 1915. A year later America’s famous Lafayette Squadron could be seen in the skies above Verdun.

But it wasn’t until June 1st, 1917, when 20,000 men of the 1st Infantry Division landed in St. Nazaire that America was officially in the war. By the end of the following month they were in position at Gondrecourt-le-Chateau in the southeast of the Meuse.

At the time the whole American army consisted of only 200,000 poorly equipped soldiers, so the French had to provide cannons, machine guns, rifles and munitions as well as the necessary training.

After the US Conscription Law was passed these numbers increased to 77,000 by the beginning of November, and within five months, to 335,000.

The Meuse was actually the first battle for the US Army on foreign soil. The arrival of American troops provided necessary relief for the war-weary French soldiers and precipitated the end of the War.

Besides helping to liberate France, the Americans also contributed greatly to the reconstruction effort in the Meuse. Many town halls, hospitals, schools and water towers were rebuilt with the financial aid of American individuals and institutions. They stand today as a testament to the generosity of the American people and the close ties both countries enjoy.

There are more than 80 memorials commemorating the WW I American presence in Meuse. The American Cemetery of Saint Mihiel (Thiaucourt, Meurthe-et-Moselle) has 4,153 graves. At Romagne-sous-Montfaucon in the Argonne, the 130 acre cemetery is the largest burial site from both World Wars in Europe with 14,246 graves.

Impressive Memorials have been built by the Americans at Montsec and Montfaucon d’Argonne. The States of Pennsylvania and Missouri, plus many institutions and individual regiments built monuments at Argonne, Nantillois and other places.

Several statues, steles and obelisks pay tribute to the vital role played by the US forces in the Meuse 90 years ago.

Meuse Tourism Office
There are over 80 monuments dedicated to the USA in the Meuse. Hightlights include the Argonne Battlefield, Saint-Mihiel Salient, Thiaucourt Cemetery, Verdun and the Red Zone, Fort Douaumont, Douaumont Ossuary, Verdun Memorial Museum, Citadel and, from late June through July see the recreation of the Battle of Verdun as the largest sound & light show in France on Friday & Saturday nights.

Reims Tourism Office
John D. Rockefeller, Jr. donated money to rebuild the Notre-Dame de Reims cathedral, the Andrew Carnegie Foundation donated money to build the municipal library, and Americans donated money for the Children’s Hospital of Reims. Also, as a WW II site, the museum of the surrender of the Third Reich’s German Armies is in the map room of the Franklin D. Roosevelt High School, (which was the Supreme Headquarters Allied Expeditionary Forces.) The surrender ended the Second World War in Europe.

La Marne Tourism Office
Moreau Valley Camp, Navarin Monument remembering 10,000 unknown soldiers who died in the battles for Champagne, this includes Teddy Roosevelt’s son Quenton’s remains and plaques to the Rainbow Division. Also see the American Monument at Blanc Mont commemorating the 70,000 American soldiers who fought there. The Circuit of Remembrance is a self-guided tour in the footsteps of the Armies of Champagne –

Information of vineyards, wine and champagne tastings, churches, restaurants, shopping and the many other places of interest are all available at the above tourism websites.

The commemorations highlight the part played by the Americans in ending World War I.
Their involvement was fundamental and is an integral part of the commemorative heritage.

A SOUND-AND-LIGHT SHOW MARKING THE LIBERATION OF THE ARGONNE in Montfaucon d’Argonne on September 26 & 27, October 3 & 4, 2008 to be staged by the Connaissance de la Meuse Association – the organizers of France’s second largest sound and light show.

EXHIBITION ABOUT THE AMERICAN OFFENSIVE IN THE MEUSE from October 2008 to the end of 2009, Verdun

ILLUMINATION of the road from Saint-Mihiel to Montfaucon, SYMBOLISING THE JOURNEY OF AMERICAN TROOPS from the Saint-Mihiel Salient to Argonne, on September 20

SALON DU LIVRE D’HISTOIRE (exhibition of the history-book) in Verdun, from 9 -11 November 2008

COMMEMORATION ON NOVEMBER 11: The bells of the Meuse will chime and the names of the US soldiers buried at Romagne sous Montfaucon will be read out.

The above events are free. (This provisional program is subject to change)
.
Note also that in June and July 2008, THE SOUND-AND-LIGHT SHOW “DES FLAMMES A LA LUMIERE” (From Flames to Light) presented by Connaissance de la Meuse is to be enhanced by the addition of a new scene about the Americans in World War I. Translation is available through headphones.

In the Marne County, walking commemorative tours are planned all year long.

Contact tourisme-meuse.com for further information about these and other WW I commemorative events. 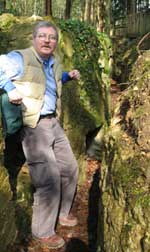 Richard Frisbie has been writing culinary travel articles for more than five years as a columnist for his local newspapers, and as a regular contributor to many Hudson Valley, Catskill Mountain and other regional New York publications. His most recent addition to that list is a wine column called “Fruit of the Vine” for Life in the Finger Lakes magazine. Online, he writes frequent articles for EDGE publications and TravelLady.com, as well as Gather.com.

Sardegna: A Prized Gem of an Italian Island

Auvergne, France: Where Coco Chanel Got Her Name