Las Vegas: What to Do If Gaming Isn’t Your Thing

Sin City is known for the bright lights that dazzle along the Strip as well as windowless casinos where you lose all concept of time. Surrounded by a large expanse of Nevada desert, Las Vegas is like nowhere you have ever visited before.

Yes, there are dozens of casinos and other opportunities to gamble, but what if you just want to have fun?

Once you have booked your flight to Las Vegas, here are 10 of the weirdest and wackiest attractions that you need to see and experience while there.

1. See a wedding at Denny’s

Las Vegas is a popular destination for those who wish to elope, swapping their family and friends for a fellow tourist to act as a witness as they tie the knot.

You might well have heard of the Graceland Wedding Chapel, where Elvis leads the ceremony and you drive away in a pink Cadillac from one of the most prominent chapels in the area.

But did you know you can get married in Denny’s? The wedding package costs just $199 and includes a cake made out of pancakes and souvenir ‘just married’ T-shirts.

Even if you’re not getting married, be in the right place at the right time and you might just be able to witness one of the 300 weddings that happen in Las Vegas each day.

Do you fancy operating a bulldozer in a giant sandbox? In Las Vegas, you can. Among the machinery on the five-acre theme park are a pair of Caterpillar D5 track-type bulldozers and three Caterpillar 315CL hydraulic excavators.

The experience begins with a 30-minute training and orientation session, followed by hours of fun digging trenches up to 10 feet deep or building large earth mounds.

You can also do skill tests such as moving a 2000-pound tire or retrieving basketballs from on top of safety cones.

There are different experiences to choose between including aggression sessions and mini excavators.

There are a series of rides across Las Vegas to cater to thrillseekers – such as The Big Apple Coaster that goes in and around New York New York hotel reaching heights of 203 feet, drops of 144 feet, and speeds of 67 mph.

It has the world’s first ‘heartline’ twists as well as G-forces and barrel-rolling 180 degrees. Then there are the nail-biting rides at the top of the Stratosphere Tower including Insanity, which rises 68 feet over the edge of the 1,149-foot tower and spins passengers at up to 3 Gs with views of the strip.

Strap into SlotZilla and you will see this area of Las Vegas in a way you have never seen it before.

In a city where overindulgence is encouraged, it might not come as a surprise to hear that there is a restaurant in downtown Las Vegas named Heart Attack Grill.

Located on Fremont Street, downtown Las Vegas, the waitresses are dressed in nurse’s uniforms while the customers are in hospital gowns complete with ID bracelets.

There are scales at the entrance so you can weigh yourself because, as the sign above the entrance states, those over 365 pounds eat for free. You might not fancy having your dinner here but it is worth a look.

Many of the hotels in Las Vegas will transport you to another place but the Venetian is on a different level. Step inside and you are suddenly in Venice, far from the bright lights of Vegas.

The rooms themselves are grand with an Italian-marble bath and sunken living room. But, it is the hotel itself, which you can experience whether you are staying there or not, that is really something special.

Here you can also enjoy a romantic and relaxing ride down the Grand Canal on a Venetian gondola. Your personal singing gondolier will take you through the Venetian streets, lined with cafes and shops, under balconies and beneath bridges.  The Venetian is also soon to be the home of the famous MSG Sphere, a giant, round amazing auditorium that seats 17,000 with a covering of LED lights that show incredible designs all night long.

Las Vegas is famous for its neon signs but have you ever wondered what happens to them when they need to be replaced or are no longer needed?

For many years the Young Electric Sign company – that produces many of the neon displays – has had a 3-acre storage yard. Over the years this has become a graveyard of disused signs and is now known as the Neon Boneyard.

This is only available to the public through an hour-long guided tour, which will let you see notable pieces of Vegas history across 150 non-restored neon signs.

7. Play at the Pinball Hall of Fame

If you don’t fancy losing your notes in the casinos then how about ‘gambling’ with a few quarters. You might not win your money back but you can unleash your inner child.

A few miles east of the Las Vegas Strip you will find the Pinball Hall of Fame.  It started when 16-year-old Tim Arnold began collecting machines and over the years found himself with almost 1000. When he moved to Vegas he bought them with him and stored them in a warehouse, beginning ‘Fun Nights’ so the public could enjoy them.

Among the rows and rows of pinball machines, you will find those that date right back to the 1930s.

This KISS-themed mini-golf features an indoor glow-in-the-dark 18-hole golf course. The black and white painted faces of the most iconic rock band of all time adorn the walls.

Once you have completed your round of golf there is the ‘Rock ‘n’ Roll All Night’ café and the ‘Hotter Than Hell’ wedding chapel as well as a gift shop and arcade games.

A pioneer in the paranormal field, Bagans first developed an interest in it when he was just 10 years old and that eventually evolved into his museum in downtown Las Vegas and a lifelong passion for the afterlife.

The 11,000-square-foot property, which was built in 1938, is believed to have been a place for dark rituals, with hostile spirits roaming the halls terrorizing occupants.

A visit to this haunted house will mean walking down creepy hallways, secret passages and tiptoeing into 30 spooky rooms.

Discover frightening facts about the items in the house including the Dybbuk Box, the world’s most haunted object.

Las Vegas might not be somewhere you expect to see an erupting volcano but you can, every hour on the hour after the sun goes down. Feel the heat from the volcano outside the Mirage hotel as fireballs shoot up more than 12 feet in the air from more than 150 FireShooters.

The show, which lasts approximately five minutes, is choreographed to music and ends with a grand finale as fire erupts 60 feet into the air.

So, book your flights, choose a hotel and start planning the weirdest and wackiest holiday you will ever go on.  And you don’t need to worry about losing money in the casinos! 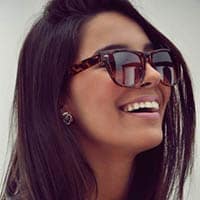 Anna Jones is passionate about all things travel after visiting a number of beautiful and exotic locations. This inspired her to put pen to paper to contribute articles to a number of high-profile travel publications, including GoNOMAD. Based in the UK, Anna is in the process of setting up her own travel blog, to share her journey.