The church at Saltaire – photos by Mridula Dwivedi 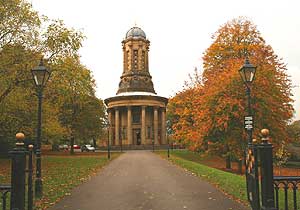 Saltaire: A Model Village From the 1800s

I was in UK at the end of October in 2007 for about 10 days out of which I spent two days in Leeds. All my trips abroad till date have been for work. So, travel usually takes a back seat. But sometimes I just get lucky.

Like this time, I was attending an academic conference in Leeds and the conference program itself included a visit to the village Saltaire, a world heritage site.

So, after half a day at the conference, around 30 of us followed a student guide to the Leeds Train Station to go to Saltaire.

It was just three to four stops away. In the meanwhile, I started chatting with some students from the Netherlands; the icebreaker was having the same model of camera as a student from the group.

It was a cold and windy when we got down from the train. I had arrived the night before from India at Heathrow, traveled from central London to Leeds for six hours on a Megabus (that seems to have half a seat only but the fare is super cheap).

In addition, I had given a talk in the morning at the conference. This conference happened to me after a gap of four years, I was almost as nervous as I was at my first conference. So, I was completely dazed and had not recovered from the jet lag when I went on this trip to Saltaire.

I was not sure what the program was but then being out of doors is always exciting for me.

Soon, we took a short walk and were herded inside the main church and two lovely ladies started telling us about Saltaire. I had tried reading about the place on the net, so I could follow them in spite of the jet lag.

A famous industrialist in the 1850s, Titus Salt wanted to shift his textile factory to an ideal location and decided on Saltaire. The place is named after Mr. Salt and the river Aire that flows nearby.

He built a huge factory and a model village with accommodation, school and hospital and most of the village is preserved as it was.

It is said that Mr. Salt was always against having a pub in his village (not because of alcohol) as he felt it would lead to all kind of political activity.
The mill at Salaire 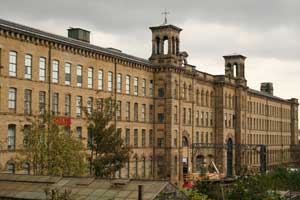 The two ladies telling his story were of very different opinions about the motive of the industrialist. The younger lady was cynical about the motives of Mr. Salt and thought he established the village because there was no other way to make profit. The older lady was of the opinion that though commerce did play a role but not too many people went ahead and established a village for their workforce.

The village at Saltaire had far less pollution than nearby Bradford, where due to cholera, typhus and other diseases, only 30 percent of children born to mill workers reached the age of 15.
A bust of Titus Salt at the David Hockney Gallery 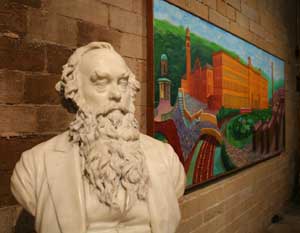 A visitor to Saltaire in 1886 wrote: “There are scarcely ever any arrears of rent. Infant mortality is very low compared with that in Bradford, from which place the majority of the hands have come. Illegitimate births are rare. The tone and sense of self-respect of the work-people is much greater than that of factory hands generally. Their wages are not high, but they enable them to secure more of the comforts and decencies of life than they could elsewhere.”

We were also given a page of the ‘rules for living in Saltaire’ from 1853 to 1876. I am reproducing a few of the rules for you here:

“Throughout the village, cleanliness, cheerfulness and order must reign supreme.
A walk along the canal 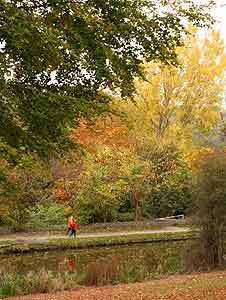 Anyone caught in a state of inebriation will immediately evicted.

No washing to be hung out to dry in front or behind any of the properties, or in the vicinity of the village.

Gathering or loitering of more than eight persons in the streets is strictly forbidden.”

I am not sure I would like to live under such rules. Anyway, now one can see clothes drying in front of the houses and back and one of the pubs is appropriately called ‘Don’t Tell Titus’.

Soon after this session we were taken around for a walk around the village. The houses were made for different people, workers having much more modest ones than the supervisors and other officials.

Our guide told us that these days young couples working in Leeds prefer to buy their first home here as it costs much less than the main city. The national rail line to Leeds is their lifeline, as it makes commuting easy.

The village also has David Hockney gallery that displays the artist’s work. The gallery is housed inside what used to be a mill and our guide rightly said you can still smell the wool in the air.

After spending some time inside the gallery, I headed out. We were asked to gather in the basement of the Church again for tea and cakes. I decided to explore on my own.

I headed towards the main Salt Mill complex and took a walk by a small canal. In my part of the globe the trees do not change color before winter, and I was completely fascinated by the red, yellow and orange of the trees.

A few kids on their bicycles crossed me, so did a few pairs and some joggers. After sometime, I headed back to the basement to some excellent cakes and coffee. After this, my next stop was Oxford.

traveltalesfromindia.in/
Like this article? Share it with your friends!
If we've inspired you to travel with this story, why not check out the prices to get there and make it happen. Search airfares, hotels, and rental cars here. Thanks!