A Yurt-Stay in Kyrgyzstan

CBT Kyrgyzstan brings travelers to stay with the locals, even in their yurts

The jeep bounced along the pitted gravel track, more an idea of a road than an actual road, as we wound our way through the towering hills.

Captivated by snow-capped peaks in the distance, I hardly noticed as we forsook the road altogether. A minute later our driver stopped in the middle of a sloping pasture. We disembarked.

Kyzart Pass is a 3000-meter-high (9,842 ft.) gap in the mountains of central Kyrgyzstan. Beka and I would hike it that day, covering ten mountainous miles before coming to our home for the night.

Herds of cattle and horses and flocks of sheep ignored us as they roamed the brown hills. We hiked alone, but tents could be seen on distant slopes and on the trails that skirted the hills we met shepherds on horseback. Beka stopped to chat and give out cigarettes.

I’d met the 23-year-old Beka the day before. He was my guide on our hike, the ultimate destination of which was Lake Son Kul.

Beka speaks his native Kirghiz as well as Russian, English, Urdu, and Farsi. Like any pair of twenty-something guys we spent much of our time talking about girls.

By early afternoon we’d forded our first stream and home was in sight. The altitude had begun to wear on me and we paused.

I offered Beka my water but he refused. “No, I want kymyz.”

Kymyz, or fermented mare’s milk, is a traditional drink in the mountain pastures, or jailoos.

We long-jumped the last stream, tossing our bags to each other across the rushing brook before leaping, and hiked the last hill to the yurts above.

Two yurts stood alongside a cooking tent near one of the corrals used in the summer season. A small figure in red noticed our approach and ran to spread the news.

By the time we arrived a young shepherd greeted Beka with a hearty hug and invited us into one of the yurts. There we collapsed before the shepherd returned with a jug and two bowls and poured out the kymyz.

Beka had chugged his first bowl before I’d tasted mine. About 3% alcohol, kymyz tastes like a thin, plain yogurt but is far, far more acidic and sour. As I watched Beka pound his second bowl like a frat kid shot-gunning a beer I wondered if I’d be able to finish mine.

How did I get myself into this situation? A week ago I’d been in Baltimore.

The answer is Community Based Tourism Kyrgyzstan, an organization dedicated to putting tourism money into the local community by making it easy for foreign travelers like myself to find jeep rides, guides like Beka, and shepherd families with whom to stay.

The day before my trip I walked into CBT’s Kochkor office. Within an hour they’d set up a three-day hiking trip for me, including food and yurt stays.  The entire arrangement cost less than 200 dollars.

Entertainment in the Hills

Which is how I found myself sitting in the cooking tent with Beka as he played American hip hop on his cell phone for the shepherd and his teenage sister. As we nodded along to Akon, Beka explained that you can get service by climbing to the top of the hills. The shepherds charge their phones using a generator.

Once through Beka’s hip hop repertoire, we followed the Russian hired hand Vassili down to the corral. In the process of expanding the corral he’d come across something strange. There, sitting on a ledge of dirt, was the beautiful backbone and skull of a massive, tusked prehistoric creature.

The next day we hiked over Tall Tree Pass, 3400 meters (11,154 ft.) above sea level, and descended to yurts near the shore of Lake Son Kul where we had lunch and decided to stop.

We spent the rest of the day playing soccer with the shepherd kids and hopping on horses to ride to the shore of the lake.

The three-year-old Kirghiz boy on his donkey outpaced me and my horse the entire time. He would turn and mime at me the proper way to ride, it just didn’t help.

Be an Instant Local

Our last day we hiked a few hours to a village of yurts, many of which had joined the CBT organization. CBT started in Kyrgystan in 2000. Originally supported by the Swiss organization Helvetas, the staff at the Kochkor office told me that CBT Kyrgyzstan has been operating independently for three years now.

CBT offices all over the country can provide any level of service, from simply handing you the address of a nice guest house to arranging every detail of a seven-day horseback tour.

My favorite part of dealing with CBT was the friendly flexibility. When the lack of an ATM in the village meant I couldn’t do the horseback tour I wanted, Beka and I planned a hiking trip.

CBT can fit tours to your schedule, and if you ever want to stop and spend some time playing soccer at your lunch yurt and maybe stay the night instead of traveling on, as Beka and I did, that’s a possibility too.

The Key to Kyrgyzstan

As my attempts to get back to the capital without CBT’s help later demonstrated to me (an epic and frustrating trip worthy of its own article) Kyrgyzstan can be a hard place to travel. Taxi cab drivers are often mercenary, signs, if they exist, are in Cyrillic, and no one and nothing is ever on time.

The country is full of natural beauty and friendly people, however. Nowhere in the western world can you find such mountains and lakes together with a culture so unfamiliar but inviting. With a little help, a trip to Kyrgyzstan can be amazingly rewarding.

Community-Based Tourism can provide that help, giving tourists an amazing local experience while they support the local community they’ve come to enjoy.

A single entry visa is $70 and is easy to get from the Kirghiz embassy. Processing usually takes two weeks.

Flights from the United States generally go through Moscow or London and end in the capital, Bishkek. Long layovers are common since Bishkek isn’t a frequent destination, so get a transit visa for Russia unless you want to spend ten hours in the dreary Sheremetyevo airport as I did.

I stayed in the Bishkek Alton. The Alton is centrally located (#30 Manas Road, telephone: 66-64-12) and relatively inexpensive. The staff is friendly but speaks almost no English. Fancier, more western hotels offer pick-up from the airport and other services, but charge more western prices as well. 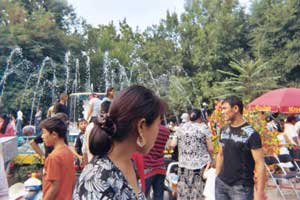 The hub of the ex-pat community in Bishkek is Cafe Metro at 148a Chui Road, about a block from the Philharmonic. A good place to find people who know how to deal with Kyrgyzstan’s quirks.

Tourism only exists May through October, as snow limits travel the rest of the year. Check ahead on the availability of English-speaking guides at the beginning and end of the season as many are students and may be in class.

Al Archa Gorge is less than an hour from Bishkek and is stunningly beautiful. A taxi will agree to take you there and can probably be convinced to wait to pick you up, all for about 800 som. There’s an entrance fee (30 som per person when I was there) to enter the park. One dollar equals 35 som.

Lonely Planet’s Central Asia guidebook is excellent and fairly up-to-date. Also consider getting a Russian phrase book, one that will help you translate the signs, which are all in Cyrillic. I used Lonely Planet’s version for that as well.

Michael Lee Cook is a freelancer and fiction writer from Baltimore, Maryland. He loves his city but travels throughout the U.S. and the world whenever possible.