Mustique: The Island with the Mystique

Mustique Island is a Celebrity Magnet

What draws celebrities and royalty to Mustique?

Princess Margaret had visited her Mustique home for decades, and Prince William and Kate Middleton, the Duke and Duchess of Cambridge, have also frequented the Island.  What is Mustique’s Mystique?

It all started with Colin Tennant, the 3rd Lord Glenconner, who purchased the undeveloped island in St. Vincent and the Grenadines in 1958.  He paid $67,000 for an island without roads, running water, or electricity. Worse yet, goats and cattle ran wild.

Eventually, Tennant made significant improvements to the island. When his good friend Princess Margaret married Lord Snowden in 1960, Tennant gave her a plot of land on Mustique as a wedding gift.

Both Princess Margaret and Lord Snowden had affairs, and their marriage deteriorated. The Princess used the private island of Mustique as an escape from the reins of royalty. In fact, she had become famous for throwing and attending wild cocktail parties where local young men wore little more than gold loincloths.

When celebrities learned that Mustique prioritized privacy and offered “tax-free status for new residents,” they flocked to the island.

They unfurled their feathers donning bathing suits and birthday suits.

The airport was and still is, equipped to accept only small planes, and this helped keep out undesirables.

In the early days, the flight lists for incoming passengers were checked to prohibit gossip columnists, paparazzi, and others, like us, that wouldn’t fit in.

Now, it’s open to the public, but it’s pricey. For example, it’s not uncommon to spend $45,000 a week for a villa during the prime season from December 15 to April 30. But, other options include staying at a hotel during the off-season.

The Purple and Pink Houses in the Village of Lovell

When we visited, we had taken a boat from Bequia, St. Vincent and the Grenadines, and it took about 90 minutes. Our boat captain Michael Bynoe told us that his father had lived in the fishing village on Mustique and that he had visited him often.

Since Michael knew people on the island, he had arranged our tour and called ahead to book our lunch at The View Restaurant and Bar.

We entered Britannia Bay and spotted the world-famous Basil’s Bar where celebrities frequent.

We paid $15 U.S. per person island entry fee, and then we walked Lovell Village where about five shops flank Lovell’s main street.

They include a seafood market where a man was cleaning freshly caught fish; a food market; two stores The Purple House and The Pink House that sold beachwear and gifts; and a general store that advertised liquor, wine, and cigars.

In Lovell Village, we grabbed a drink at Basil’s pop-up bar (Basil’s Bar is under construction until spring 2018) and hopped in one of three cabs that are on the island.

The first thing that we noticed was that the island is immaculate and the main road is in excellent shape without ruts, like most other Caribbean Islands. Mustique resorts are subtle, the way the rich prefer.

There are no sizeable signs, visible telephone or electrical wires, golf courses, or casinos.

Our cab driver was born on Mustique and lived in the local village until The Mustique Company that owns the island had moved the locals to their neighborhood up the hill.

During our tour we saw Tommy Hilfiger’s mansion; and Mick Jagger’s and Bryan Adams’ homes from afar. We dropped by the famous Macaroni Beach and then dined with our boat captain at The View Restaurant and Bar aka Lisa’s Bar.

When we finished lunch and boarded the boat to leave, the fun wasn’t over. Michael served us rum punches on our trip home while we caught a few tuna and mackerel.

Things to Do on Mustique

Basil’s Bar serves lunch and dinner, and they feature Wednesday Night Jump up and Sunday Night Sunset Jazz where guests hit the floor and dance to live music. Most importantly,  Basil’s Bar will hosts the live Blues Festival in late January every year.

Macaroni Beach, labeled one of the best beaches in the world, even has volleyball. Also, we learned that Mick Jagger attended a party on Macaroni Beach during the New Year’s holiday.

You can play tennis and volleyball, ride horses, or hike. Also, if you love water sports, you can scuba dive, snorkel, fish, boogie board, standup paddleboard, kayak, windsurf and more.

Where to Stay, There are Two Hotels on Mustique

The Cotton House, a former cotton warehouse, is a boutique hotel and resort on thirteen acres with 15 rooms that include villas, suites, and cottages with a garden or water view.

For dining and entertainment, they offer The Veranda Restaurant, Great Room Bar, and Ice cream Parlour, and a Beach Cafe and Bar.

Amenities include a swimming pool and water sports. In their wellness center, they offer yoga, meditation, a gym, personal training, and swimming instruction.

In addition, The Cotton House holds a weekly cocktail party where guests mix with the locals and sometimes celebrities like Hugh Grant.

The Mustique Company represents about 100 villas, some celebrity-owned. All villas are equipped with staff and golf carts.

Villas and hotels provide mules or golf carts, and there are also three taxi cabs on the island.

Though Mustique is not easily accessible, once you are on the island it’s worth the trip. It’s beautiful, safe, and uncrowded. If you like to exercise, love beach time, and enjoy long lingering meals, this could be the place for you.

For us, we think that four nights would be perfect, and maybe if we return, we will see a few celebrities.

What do you think about vacationing on an island with famous people? 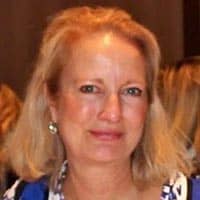 Dorothy Adele loves to play tennis and golf and explore new places. When she is not traveling, she splits her time between her Maryland home and the Delaware beaches.
You Might Enjoy Reading These GoNOMAD Articles: