At 5 am, at Tehran Imam Khomeini International Airport, the officer at the border looked sleepy. After a quick glance to my newly glued visa, he put the stamp on my Italian passport and, without even noticing my clumsily worn hijab, listlessly welcomed me to Iran. His lack of care was somehow comforting: Iran was not much different from Italy after all.

With thousands of years of civilization under its collective belt, from Darius the Great to the Islamic Revolution, the country is home to a wide array of ethnic groups that makes it all but an easy society to comprehend. With all this in mind, on the 18th Mehr of the year 1390 according to the Persian calendar, I crossed the border and found Ali holding the sign with my name. “Welcome to Iran,” he smirked. “Brother Ahmadi will bring you to the hotel.”

Watching Tehran languidly waking up made my initial worry fade away, and rush our traffic jam and commuters lining up in front of bus stops officially kicked off my Iranian adventure.

My passion for ancient Persia dates back to school years, and now my own hosts yearned to fulfill the Iranian stereotype of extreme hospitality much lauded by medieval geographers and travelers such as Ibn Battutah, Islam’s version of our Marco Polo.

From early morning, shops and restaurants released the typical scent of spices and saffron-based delicacies that shape national cuisine. Journeying throughout the names that led to the current status of world affairs, our first morning was spent peeping inside the house of the man who inspired the Revolution that brought about what now we know as the Islamic Republic of Iran. As soon as we arrived in Jamaran, northern Tehran, strict instructions prevented us from taking videos, not that anything worth filming was going on, for that matter.

Humble and unadorned, the only decoration in Imam Khomeini’s residence was a portrait, allegedly (and questionably) the face of Islam’s prophet. A private passageway connecting his house directly to the mosque was the only luxury Khomeini considered in line with his frugal lifestyle, in striking contrast with the former Shah’s Palace in Niavaran, also in northern Tehran, epitome of an opulent way of living.

The royal façade, with its flowery decorations and imposing columns, was already a hint of the glamorous rooms within. The palace appeared frozen in time, the late ’70s, its private areas, untethered to time, looked like their owners were about to glide in and enjoy their sumptuous routine of which we got to see everything, from the pale pink nail polish on the Empress’ commode, to the colorful and shiny dresses hanging oblivious in the floor-to-ceiling wardrobes.

The sparkling silverware and massive wooden table in the softly lit dining hall was set as if ready for guests to arrive, and the toys scattered on the children’s beds evoked images of the Pahlavi family swanning around. The pink princess telephone was an especially dated touch.

This glimpse on a society we don’t hear much about ended at the tea house in the park dominated by the view of the mansion. Being already on my third day in Iran didn’t prevent me from getting mildly shocked to see local girls smoking water pipes at the table next to mine, chattering their way to a pleasantly breezy evening, probably spent at state-of-the-art Milad Tower where, all spruced up with heavy make up and fashionable headscarves, they would saunter along hand in hand with their date. Tehran’s modernity in styles and social mores didn’t quite prepare me to another side of Iran, its more religious and conservative cities.

Begging for mercy in Qom

My admission to the shrine of Hazrat Ma’soumeh in Qom proved controversial. My friend Fatemah and the fierce guardian of the holy place wrangled over my obligation of wearing a chador for about ten minutes.

As we stepped over the threshold, Setareh gave me the first, solemn warning: “Never leave my hand, if you get lost, you won’t know how to get to the exit.” Belittling the advice and releasing my hand to collect my shaky chador proved unfortunate. A homogeneous and seemingly endless sweep of black chador-clad women drifted in what seemed a room full of mirrors.

It took me a fraction of a second to realize I was lost. I had ignored my friends’ warning and that was my punishment, being swept away by an obstreperous flow of women frantically imploring for mercy. I tried looking behind to see the faces enveloped by the veil but couldn’t recognize any familiar feature. I grabbed a random chador before me and luckily it belonged to one of my friends. I was safe, danger was averted, and I wasn’t going to take the risk again.

The shrine, tomb of a sister of Imam Ali ibn Musa al-Riza, seventh descendant of Islam’s Prophet Mohammad, is one of the holiest places of Shiite pilgrims in Iran, together with Mashhad, where the Imam himself is buried. The inside view was magnificent: the white-marbled tile work is finely decorated with faience inscriptions, while the ceiling is enriched with a muqarna-based composition, typical ornament of Islamic and Persian architectural style. A mesmerizing interplay of crystals and reflections gives the impression of being motioning to an otherworldly dimension.

Lingering in an Oasis

After exiting the illustrious mausoleum and briefly indulging in the local market, the only crowded spot in this religious city where Iranian clerics are formed, where any sort of souvenir, from traditional hijabs to rosary beads, was sold, we were off to Esfahan province, where Mansour’s promise of visiting “very ancient villages” sparked my passion for history.

Driving along the red range of the Karkas Mountains, we gaped at minarets rising over the typical desert architecture of local villages enshrined in tradition. After an hour striding across the scattered vegetation of barren red jagged mountains on one side and stretches of sand and salty crusts, we could see evidence of the extreme vaporization during the blazing summer season, of the Dasht-e Kavir, also known as the Great Salt Desert.

On the other side, we arrived at the oasis town of Kashan. Although it was already October and the sweltering heat was supposed to be over, temperatures were higher than the expected spring-like climate.

Dating back to the 4th century BC, Kashan stands out thanks to its beautiful badgirs, “wind-catchers”, probably the most renowned features of local buildings, that like no other owe their existence to a simple atmospheric condition. These wind towers, forerunner of modern air conditioners, rise a few meters above roof level to catch all air movements, funneling them down to cool the inside of the houses.

The air was dry, but despite the heat and the desert, didn’t taste of sand. We were in an oasis, and the residence we were to visit, built some 180 years ago for the Abbasian family, one of the local tribes, was the image of a green shelter.

Right after the entrance hall, the vast central courtyard consisted of a pool surrounded by plants and beautifully carved vaulted walls. Unearthing as we were Iran’s private side, picturing the owners busy in their daily life became almost inevitable. After our allocated hour, the twilight suggested it was time for the last prayer before dark, to be performed at the mosque nearby, lively building glowing in the dim light.

After prayers, another hour-long drive awaited. When we finally arrived in Abyaneh, the sunlight was already fading away, so we opted for a night in, spending the remaining of the evening puffing sheesha, drinking local tea and looking forward to unearthing Zoroastrian Persia planned for the following day.

Soon after we took possession of our rooms and descended back to the dining hall, a local meal was being served, both on the rustic tables and on the large sofas surrounded by embroidered cushions, where Iranians like having their meals and lingering afterward.

On the menu, dizi, a rich mutton-based stew that requires a quick ceremony in order to be eaten. Served on a steel mortar are the meat and the veggies ready to be mashed. Their red, thick broth is poured in a bowl where, mixed with torn-up crispy bread, becomes a delicious soup.

When, the next morning, I woke up to get ready for the excursion, I realized the outside vista was one of the best assets of our hotel. From my balcony, before my eyes was the awe-inspiring mountain chain commanding a surreal village that probably didn’t look much different in its heyday under the Safavid rule.

Sprawl of narrow alleys begging for further exploration, Abyaneh, perched on the Karkas Mountains, carries some flavor of ancient Persia, when its residents believed in the Zoroastrian creed. The red clay widely used to build local houses gives the village a unique appeal, thanks to which the whole place can comfortably fit the definition of outdoor museum.

An exceptional combination of natural and man-made, what makes Abyaneh endearing is how its inhabitants proudly preserve their origins, sticking to an ancient language that even most Iranians struggle to understand, their women keeping the typical flower-patterned hijab and buildings strictly made of the same construction material, almost to make the contrast between modern world and ancestral civilization more striking.

The journey back to Tehran, even though as spectacular as in the opposite direction, was not as cheerful because, for as much as I longed for a visit to the local market, I knew in the end for me was the airport and the flight to Europe.

We woke up early in the morning to head to Waliasr Street, Tehran’s longest road, in time not to get stuck in the city’s chronic traffic. Almost in a virtual closure, here I was, exploring the places that release every day the typical scent of spices I had smelled on my first day when, still sleepy, I was making my way to the now familiar hotel.

Tehran’s markets are a feast of flavors, colors, fragrances of homegrown produce, hectic bargaining and an intriguing mélange of black chadors and bright headscarves. Fresh pistachios, sour cranberries and dried fruits made my mid-morning snack, a starter for the chicken kebab I tucked into for lunch.

Traditional meals, soaking up into local life, witnessing daily prayers, strolling back in time on the slopes of the Karkas Mountains had been, in a nutshell, my first experience in Iran, a country that has dazzled travelers and writers for centuries, and possibly the nation that today more than any other hits the headlines the world over.

Walking me to the taxi, Mohammad knows how to tease me: “Next time we go to Esfahan,” he grins. I take him seriously, because if in Iran hospitality is sacred, in Italy every promise is a debt. 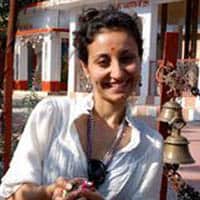 Angela Corrias is a freelance writer, blogger and photographer. In her articles she always tries to combine her passion for traveling with a socially aware writing. She regularly updates her website www.ChasingTheUnexpected.com from any corner of the planet.